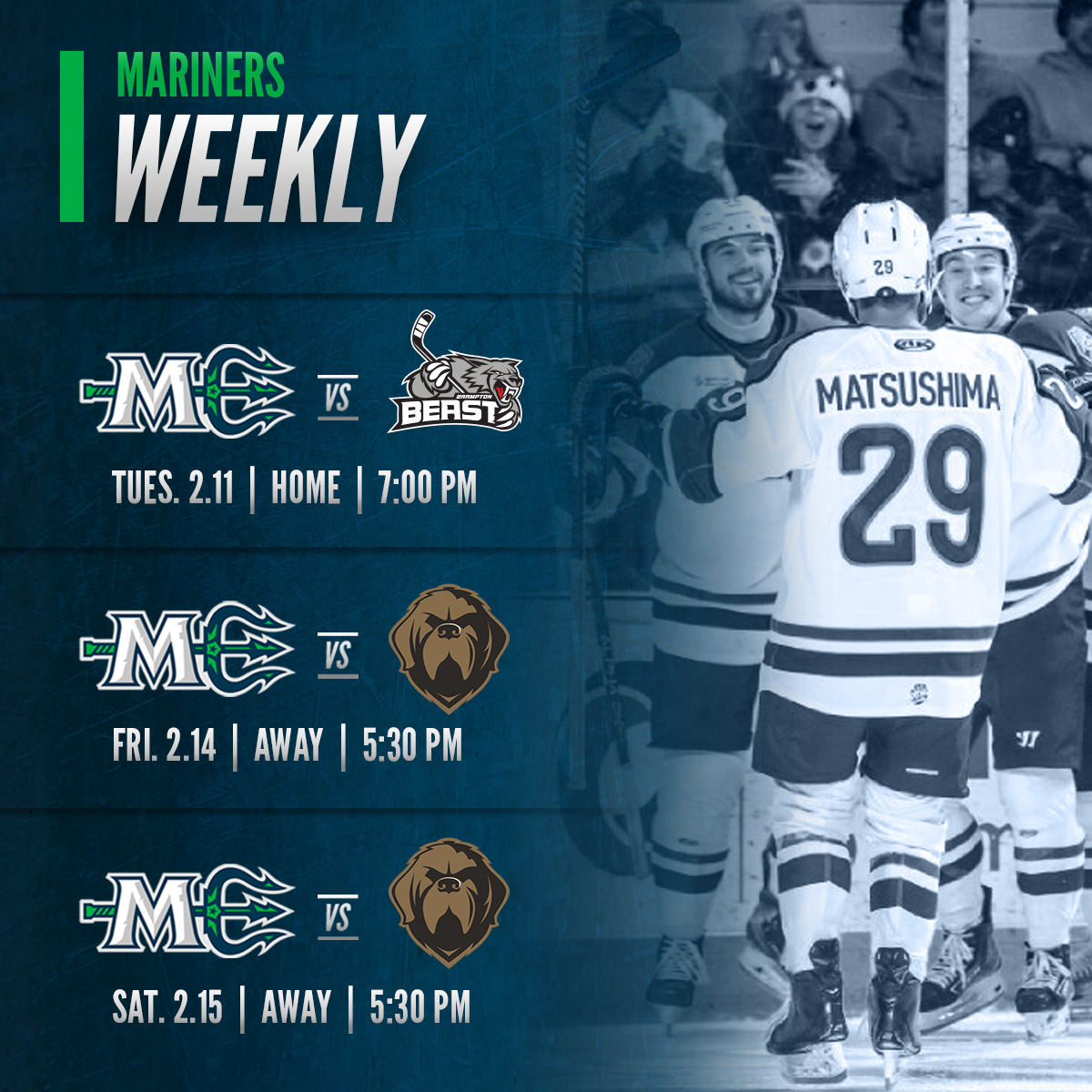 Feb. 10, 2020 – One game remains on the current homestand for the Maine Mariners before becoming road warriors for the next three weeks. After Tuesday’s season-series finale against the Brampton Beast, the Mariners will play seven of their next eight games on the road, stopping home just briefly on February 23rd to celebrate the 40th anniversary of the Miracle on Ice. The road stretch begins in St. John’s Newfoundland on Friday, where the defending Kelly Cup Champion Growlers haven’t lost a game since October. The Mariners will look to keep the North Division leaders from breaking an ECHL record, all the while trying to inch closer to clinching a playoff spot.

In the start of a busy home week, the Mariners continued to dominate Worcester on Cross Insurance Arena ice, building a 3-0 lead on goals by Michael McNicholas, Marc-Olivier Crevier-Morin, and Ryan Culkin. Dillan Fox added an empty netter while Greg Chase and Alex Kile each registered three assists. The Mariners moved into a third place tie with Brampton. FULL GAME RECAP & HIGHLIGHTS

The Mariners again took a 2-0 lead on Worcester, getting goals from Fox (his fourth game in a row with a goal), and Morgan Adams-Moisan. The rest fell on Connor LaCouvee’s shoulders, as he made 45 saves on 46 Railers shots. The Mariners moved to 11-1-0-0 all-time against Worcester in Portland and took sole possession of third place in the North. FULL GAME RECAP & HIGHLIGHTS

The Mariners kept their point streak alive, but the win streak came to an end at the hands of a rested Brampton Beast team that hadn’t played in a week. Maine rallied back from a 2-0 deficit with a shorthanded goal late in the 2nd period by Alex Kile and then a 4-on-4 marker from debuting forward Conner Bleackley early in the 3rd. David Vallorani beat the Mariners in OT for the 2nd time in less than a month, when he scored his ECHL-leading eighth game winner late in 3-on-3. FULL GAME RECAP & HIGHLIGHTS

Sunday’s game was a see-saw affair, with the Beast taking three one-goal leads, ultimately holding onto the third. Linsday Sparks had two for Brampton, while Jake Elmer and Morgan Adams-Moisan tied the game in the 2nd and 3rd periods. Elmer’s goal send packages of underwear flying from the stands for the “Underwear Toss,” which collected donations for Preble Street Teen Services. David Pacan’s redirect with less than 12 minutes to play in the 3rd held up as the game-winning goal. Brampton jumped back over Maine for third place. FULL GAME RECAP & HIGHLIGHTS

The Mariners and Beast finish their season series on Tuesday night at the Cross Insurance Arena, separated by just one point for third place in the North Division playoff race. It will be the last home game until Sunday, February 23rd when the Mariners celebrate the 40th anniversary of the Miracle on Ice with “Miracle Night,” at 3 PM against Newfoundland. The Mariners will wear specialty jerseys inspired by the 1980 U.S. Olympic goal medal team, which will be auctioned through the Handbid app, beginning February 12th. The Disney movie will be screened on the video board following the game. 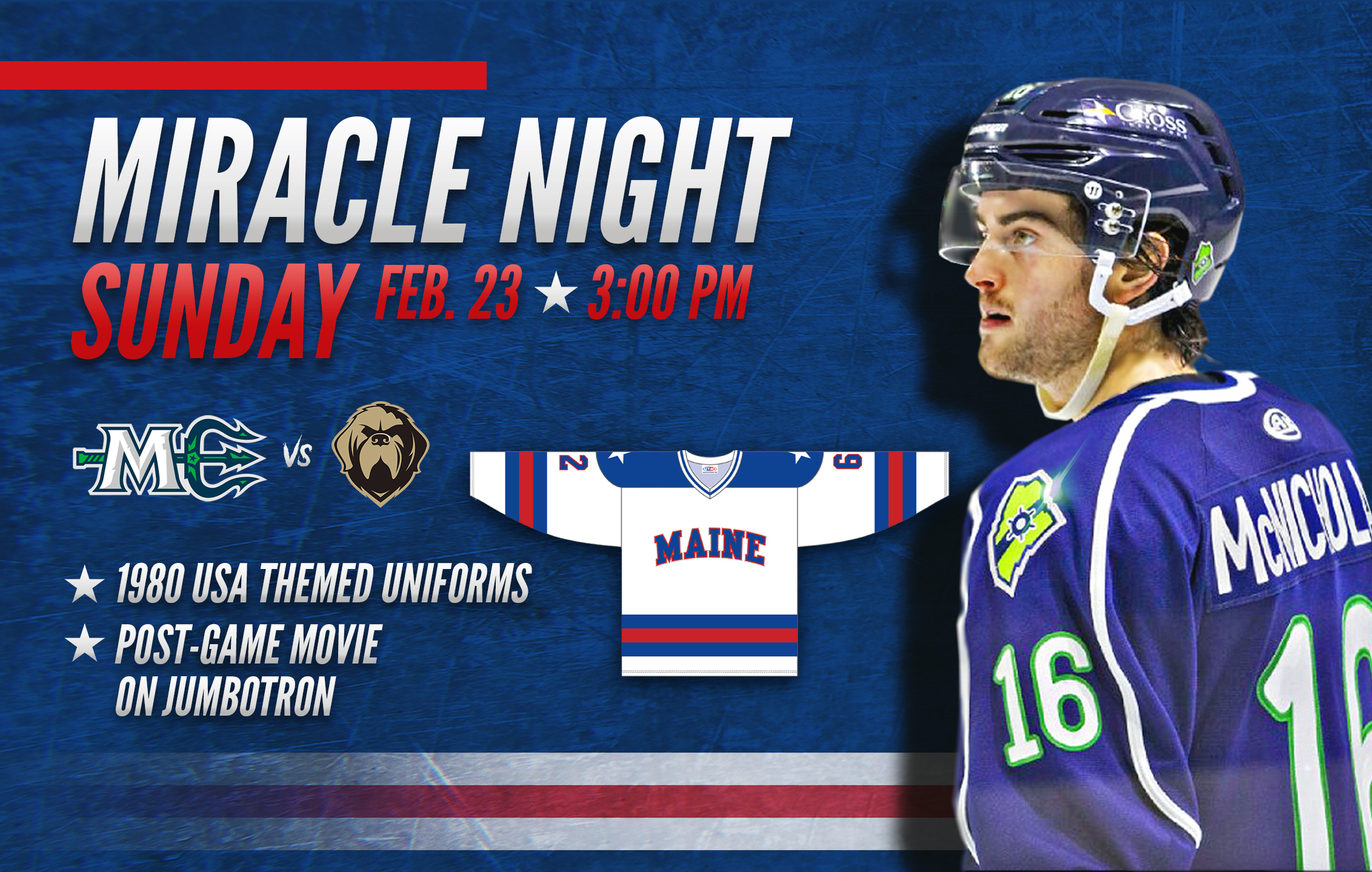 The five game road trip begins this coming weekend in Newfoundland, where the Mariners will attempt to end the Growlers’ 18 game home winning streak, which has tied an ECHL record. The Mariners play a total of four games in St. Johns (February 14th, 15th, 18th, and 19th), before finishing the trip at Adirondack on February 22nd. All games air on the Mariners Broadcast Network, with pregame coverage beginning 15 minutes prior to puck drop. The radio broadcast streams free on MarinersOfMaine.com/listen or the Mixlr App. A video stream is available on a subscription or pay-per-view bases through ECHL.tv in HD, with the “AWAY” option carrying the Mariners broadcast.

Looking ahead:
The first four games of March are on home ice. On Sunday, March 1st at 3 PM, the South Carolina Stingrays come to down as the Mariners name the Captain Joel Barnes Community Service Award winner, plus a postgame skate with the team. On March 6th, it’s Throwback Night against the Reading Royals at 7:15 PM, as the Mariners wear original Mariners jerseys with Mariners AHL alumni on hand. The full promotional schedule can be found here.