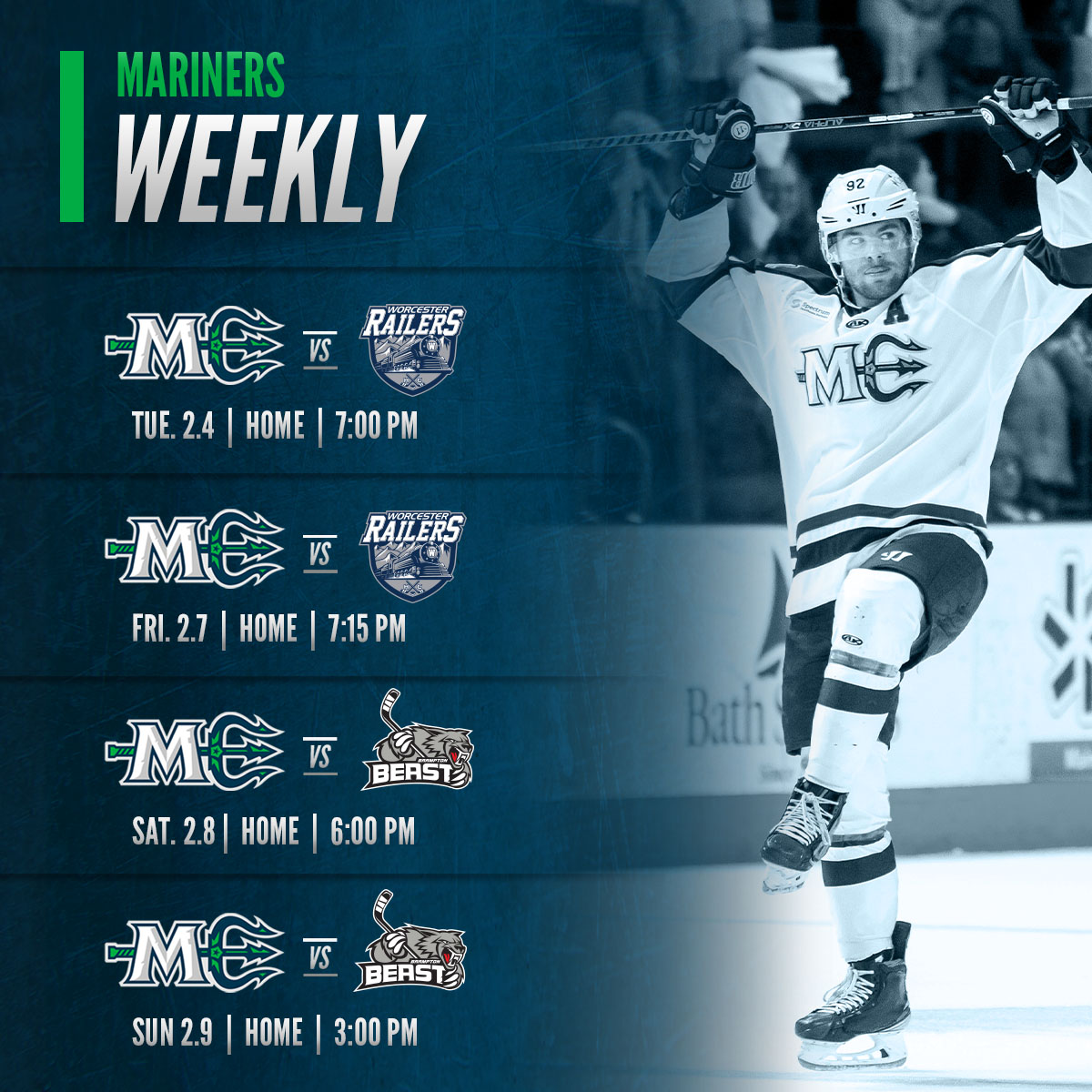 Feb. 3, 2020 – Michael McNicholas capped off a magical Make-A-Wish night on Saturday with the overtime winner, giving the Mariners a three game sweep of the Adirondack Thunder, and putting them three points clear of the fourth and final playoff spot in the North Division. It was the fifth win in six games for a Mariners team which also now has points in 8 of 10 overall. They now have third place in their sights, just two points behind the Brampton Beast, who don’t play again until Saturday in Portland. The Mariners play twice against Worcester between now and then, as their early February homestand continues this week. All in all, five more games will be played at the Cross Insurance Arena in the next eight days.

The Mariners started the week two points behind Adirondack for fourth place and immediately made a statement in their first of three games against the Thunder, posting a 3-0 shutout on the road. For Connor LaCouvee it was his second consecutive shutout, making 30 stops while Ted Hart, Morgan Adams-Moisan, and Sean Day all found the net. The win made it five in a row for Maine at the Cool Insuring Arena. FULL GAME RECAP & HIGHLIGHTS

Sean Day stayed hot by scoring two goals in a game that was filled with penalties – 84 minutes combined between the two teams. The Mariners opened up the game in the second period with goals by Alex Kile, Dillan Fox (shorthanded), and Day to build a 4-1 lead. The Mariners pulled back ahead of the Thunder for fourth place by two points, and clinched the season series. FULL GAME RECAP & HIGHLIGHTS

Transactions (oldest to most recent)
NO TRANSACTIONS LAST WEEK 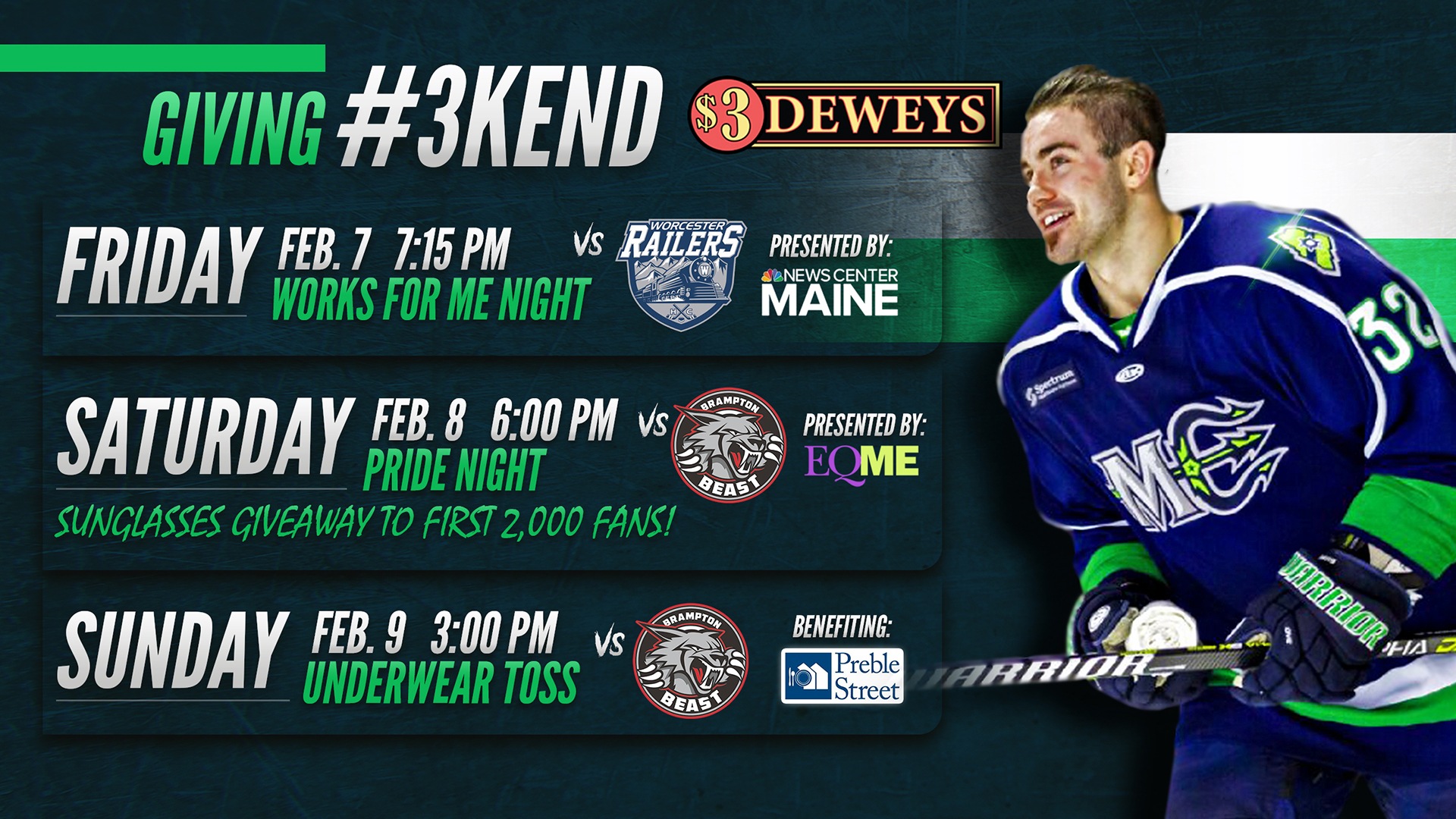 The second “3kend” of the season is sponsored once again by Three Dollar Deweys, and it’s the “Giving 3kend,” with a focus on community. Friday night’s “Works for ME Night,” is sponsored by News Center Maine. It’s also a 1-2-3 Friday: $1 Aquafina, $2 Pepsi products, $3 Bud Light drafts through the start of the second period. On Saturday, the first 2,000 fans will get a pair of sunglasses presented by EqualityMaine as part of “Pride Night.” On Sunday, fans are encouraged to bring new packages of underwear to toss onto the ice after the first Mariners goal – proceeds to benefit Preble Street Teen Services. Through the months of February and March, the Mariners will be collecting new and lightly used books for Ronald McDonald House Charities of Maine.

The Mariners Coach’s Show returns this Thursday, February 6th, hosted by Mariners broadcaster Michael Keeley, featuring guests Riley Armstrong (Head Coach/Assistant General Manager) and forward Morgan Adams-Moisan. The show runs from 6-7 PM, broadcasting live at Three Dollar Deweys at 241 Commercial Street in Portland and airs online at MarinersOfMaine.com/listen. Four tickets to an upcoming Mariners game will also be given away at Three Dollar Deweys at the end of the show.

Looking ahead:
The Mariners conclude their homestand with one more game against Brampton on Tuesday, February 11th at 7 PM. They will then embark on a five game road trip to Newfoundland and Adirondack before returning to Portland for “Miracle Night,” on Sunday, February 23rd at 3 PM vs. Newfoundland, honoring the 40th anniversary of the “Miracle on Ice.” The team will wear Team USA inspired jerseys and the Disney movie will be screened on the video board following the game. The full promotional schedule can be found here.