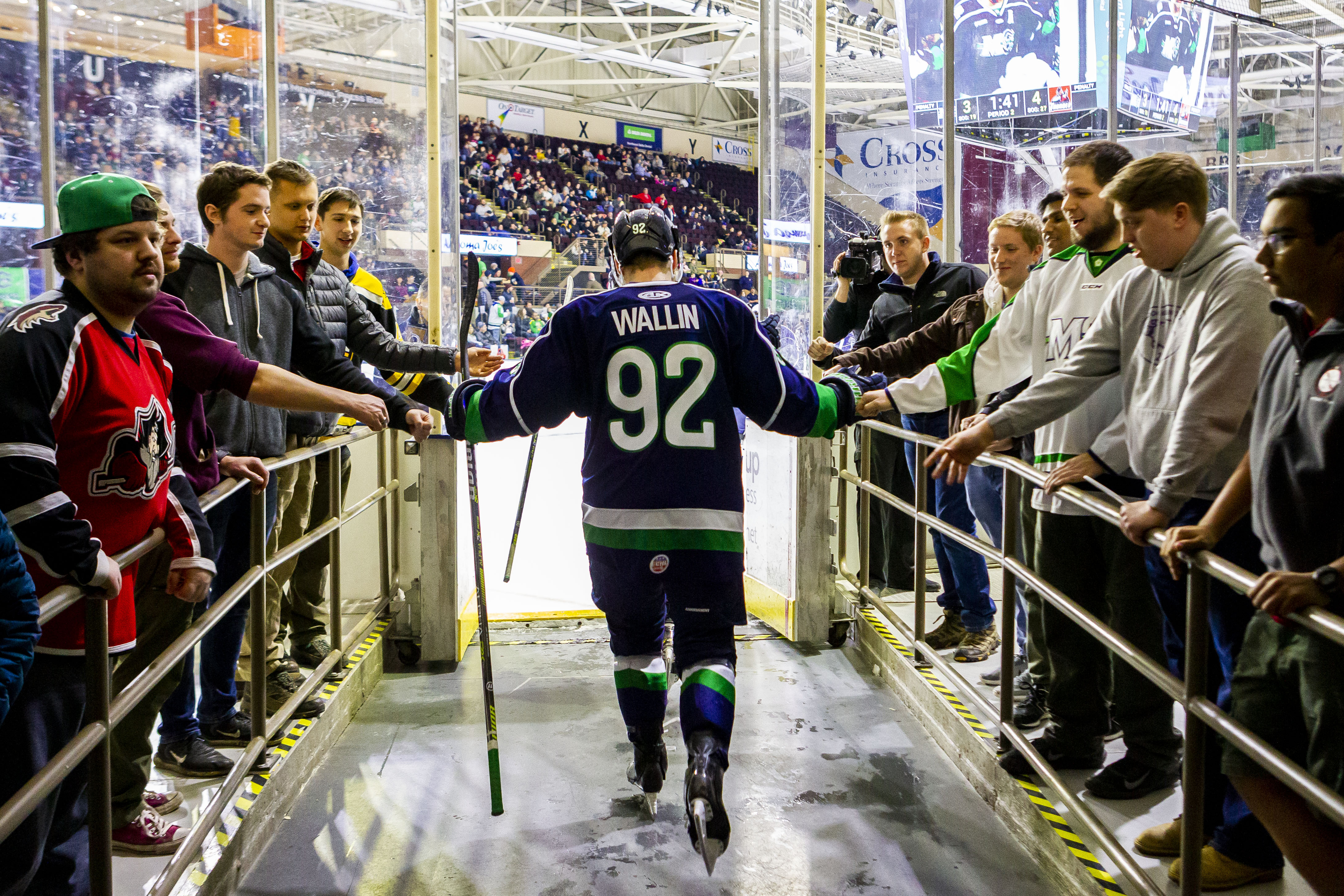 Dec. 9, 2019 – A pair of high scoring affairs took place over the weekend between the Mariners and Adirondack Thunder, as the teams played back-to-back 5-4 games in a home-and-home last Friday and Saturday. The Mariners prevailed in both and although Adirondack gained a point in Friday’s overtime loss, Maine closed the gap from seven points to four in the race for fourth place (and the final playoff spot) in the North Division, with the first quarter of the season in the rear-view mirror. It was the first sequence of consecutive wins for the Mariners outside of their four game streak at the beginning of November and they’ll look to keep December perfect with three games this week – including an appearance by Santa Claus himself on Tuesday in Portland!

The Mariners were seeking just their second win in their seventh all-time trip to Glens Falls and looked to be in good shape when they built up a 3-0 lead within the first 6:20 of the second period on goals by Jake Elmer, Terrence Wallin, and Ted Hart. Elmer added another moments after Adirondack finally broke the board and Maine had a comfy 4-1 lead, which shrunk to 4-2 through the end of the 2nd. The Thunder rallied with a pair of goals from Robbie Payne to tie it up in the 3rd, but exactly halfway through overtime, Elmer completed his second hat trick of the season against Adirondack to give the Mariners the two points. FULL GAME RECAP & HIGHLIGHTS

Saturday’s game switched venues but played out in similar back-and-forth fashion. Elmer got the sacred Teddy Bear Toss goal just 2:15 into the game, but Adirondack got three in short order to take a two goal lead. Ryan Gropp and Ryan Ferrill scored to knot the game at three, but the Thunder used the power play to go back ahead before the end of the 2nd period. Elmer capped an unbelievable weekend with his fifth goal in two games to tie it at four, and it was Ty Ronning, who had just been reassigned from the AHL less than 24 hours prior, coming up with the game-winning shorthanded goal to give Maine the weekend sweep. FULL GAME RECAP & HIGHLIGHTS

Tuesday’s meeting with Adirondack will be the third in a row, with still three more in the month of December. The Mariners are currently four points behind Adirondack for fourth place in the North Division, and hold four games in hand. Santa Claus will be in the building, taking photos with fans on the concourse for no additional charge. The Mariners make their second and third of nine trips to Worcester over the weekend, both games beginning at 7:05, with coverage on the Mariners broadcast network beginning at 6:50. A free radio broadcast is available at MarinersOfMaine.com/listen and fans can also subscribe to watch in HD on ECHL.tv – the “AWAY” option will carry the Mariners broadcast.

After the Christmas break, the Mariners return to the Cross Insurance Arena to meet Adirondack again at 7 PM on December 26th for Nickelodeon Takeover Night, featuring Teenage Mutant Ninja Turtles specialty jerseys, which will be available on auction through the Handbid App. Co-creator of Teenage Mutant Ninja Turtles, Kevin Eastman is a native of Westbrook, Maine. A 7:15 puck drop on December 27th against the Reading Royals is STEM Day, science and technology related in-game promotions. The full promotional schedule is here. All Friday night home games are “1-2-3 Fridays” featuring $1 Aquafina waters, $2 Pepsi proucts, and $3 Bud Light Drafts through the start of the second period.

All tiers of Mariners holiday packs are back in stock, with a fourth option – the Frosty Pack, now available! Holiday packs can be purchased through the Mariners online shop here.