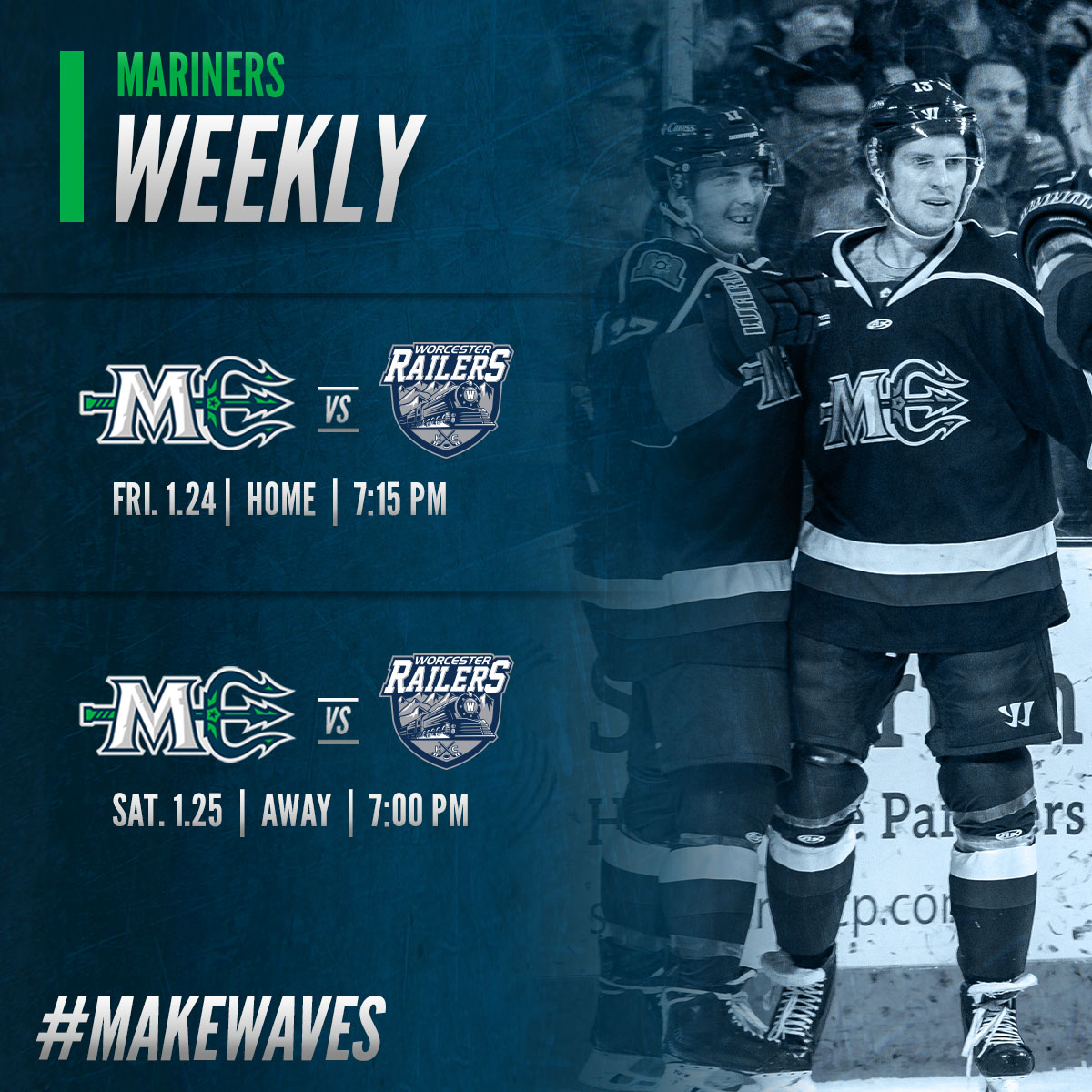 Jan. 21, 2020 – The busiest 10 day stretch in the young history of the Maine Mariners is now behind them, and a much needed All-Star break is now underway, giving the players a chance to get away from the game for a few days before resuming the grind this coming weekend. Last week’s grueling “8 in 10” got off to an inauspicious start when the Mariners dropped the first three games – all on home ice, but they managed points in four of the final five, for a respectable run of 3-4-1-0 over the eight. Now 32 games remain on the docket, the Mariners holding a playoff spot if the season were to end today. As January rapidly winds to an end, seven of the next 10 are on home ice, each game bigger than the last.

The Mariners were looking to avoid their sixth loss in a row, which would have been a new franchise long mark. Despite 17 first period shots, and a spirited fight between Morgan Adams-Moisan and Yanick Turcotte, the Mariners found themselves trailing 1-0 until late into the 2nd when Ted Hart’s power play goal tied the game. Worcester immediately regained their lead, however and carried a 2-1 advantage into the third. The Mariners power play saved the day when Adams-Moisan and Wallin scored back-to-back to steal a 3-2 win and end the losing skid. FULL GAME RECAP & HIGHLIGHTS

In a quick turnaround, the Mariners marched into Glens Falls and got their fourth win in a row at the Cool Insuring Arena. For the second straight night, it was the power play which led the lay – Alex Kile and Ty Ronning scoring with the man advantage in the third after the game was tied at one. Kile and Ronning each had two goals on the night while Francois Brassard earned the win between the pipes. The Mariners leapfrogged Adirondack for fourth place in the North Division. FULL GAME RECAP & HIGHLIGHTS

In one of the crazier games of the season, the Mariners and Beast combined for 13 goals, as leads changed hands multiple times, and ultimately Brampton claimed a 7-6 overtime win. Eddie Matsushima scored twice for the Mariners, who had leads of 2-0, 3-1, and 6-4, as late as over halfway through the third period. Brampton’s Daniel Leavens led the Beast back with a hat trick, and David Vallorani netted the overtime winner. FULL GAME RECAP & HIGHLIGHTS

Both teams played a much more concerted defensive effort, but Brampton was able to take a 4-0 lead against Francois Brassard and the Mariners, scoring two in each of the first two periods. It wasn’t until Michael McNicholas’ shorthanded goal late in the third (his first goal in 16 games) that the shutout bid of Alex Dubeau was spoiled. Mariners leading scorer Terrence Wallin injured his foot blocking a shot less than a minute into the game. FULL GAME RECAP

The Mariners flipped the script on the Beast, grabbing a 4-0 lead on goals by Brandon Crawley, Sean Day, Jake Elmer, and Ted Hart. Connor LaCouvee rebounded nicely from a shake performance on Friday, with a 27 save shutout, his second in less than a month. FULL GAME RECAP & HIGHLIGHTS 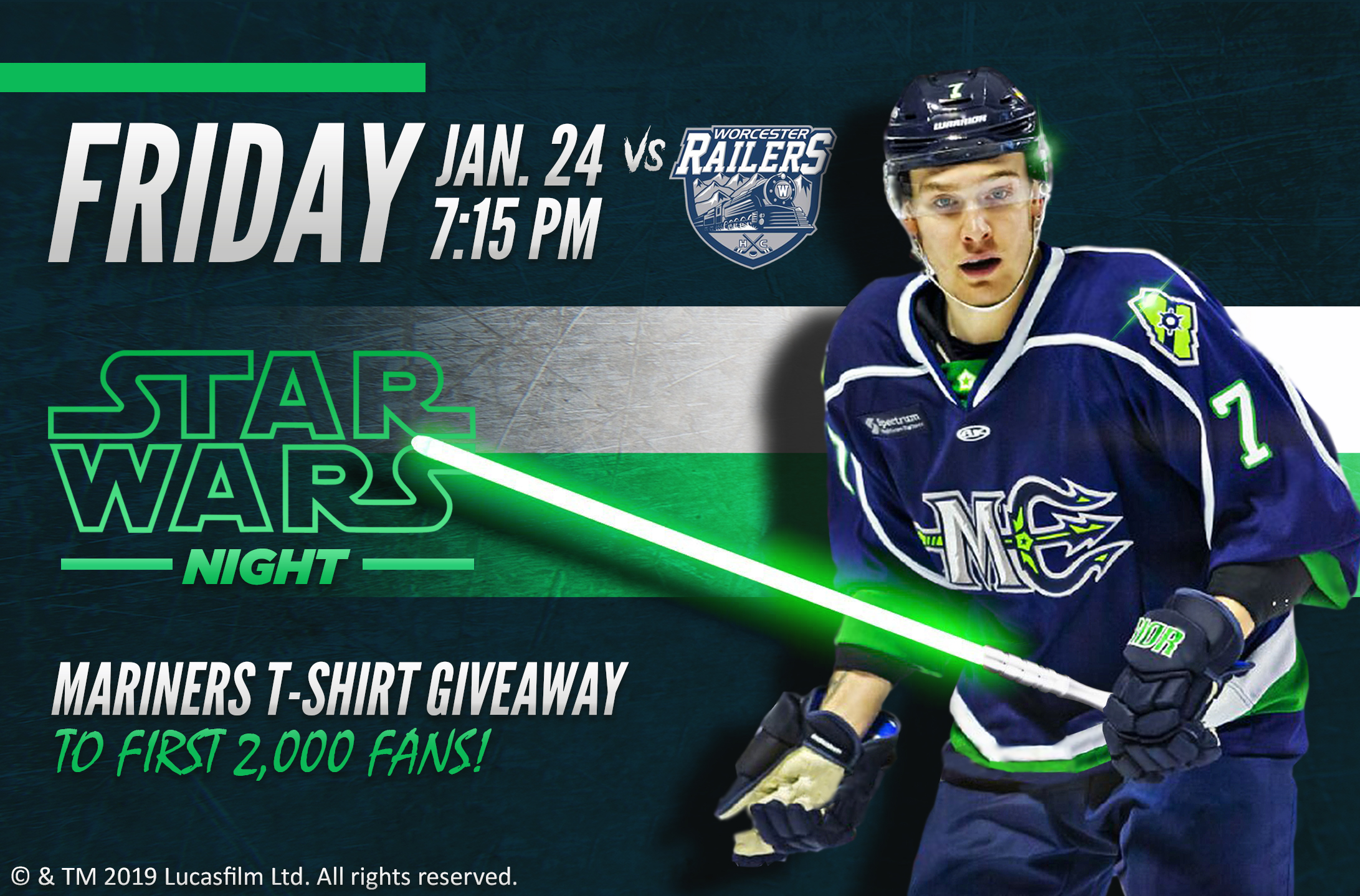 The first 2,000 fans in attendance on Friday will get a Mariners T-shirt, courtesy of Unifirst. It’s Star Wars Night, which will feature movie characters roaming the arena to interact with fans, plus Star Wars themed in-game elements. Fans can bid on experiences through Thursday, January 23rd, including benchwarmers, ceremonial puck drop, and a postgame photo with Beacon on the Handbid App – 100% of proceeds benefitting Maine Children’s Cancer program. It’s also a 1-2-3 Friday: $1 Aquafina, $2 Pepsi Products, $3 Bud Light Drafts through the start of the 2nd period. Fans can avoid Ticketmaster Fees by purchasing tickets through the Mariners new “Theme Night Tickets” page.

The Mariners Coach’s Show is off for the remainder of January, and will return on Thursday, February 6th. The show airs from 6-7 PM and also broadcasts live at Three Dollar Dewey’s at 241 Commercial Street and airs at MarinersOfMaine.com/listen. Due to team travel, the February 6th show will be the last show until the month of March.

Looking ahead:
The Mariners play the first six games of February on home ice. On February 1st, when the Mariners host Adirondack, they’ll be wearing special jerseys, designed by Make-A-Wish Maine wish kid, Ellie Labree, and sponsored by Agren Appliance. The jerseys will be then auctioned off, proceeds benefitting Make-A-Wish Maine. The Giving #3kend is February 7th through 9th presented by Three Dollar Deweys, which includes Works for ME night, Pride Night, and Underwear Toss. The full promotional schedule can be found here.

The Mariners and the Cross Insurance Arena are collecting new packages of underwear and socks to benefit the Preble Street Teen Center on Friday, which will switch over to a book collection for the remainder of the regular season for the Ronald McDonald house. Fans who donate five items (or three books in February/March) will receive a ticket to a Mariners weekday game. Items MUST be donated at the Promotions Port to the right of the main security gates. While the Mariners will accept donations at their office, fans are not eligible to receive tickets unless the items are donated at a game. 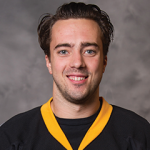 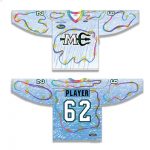