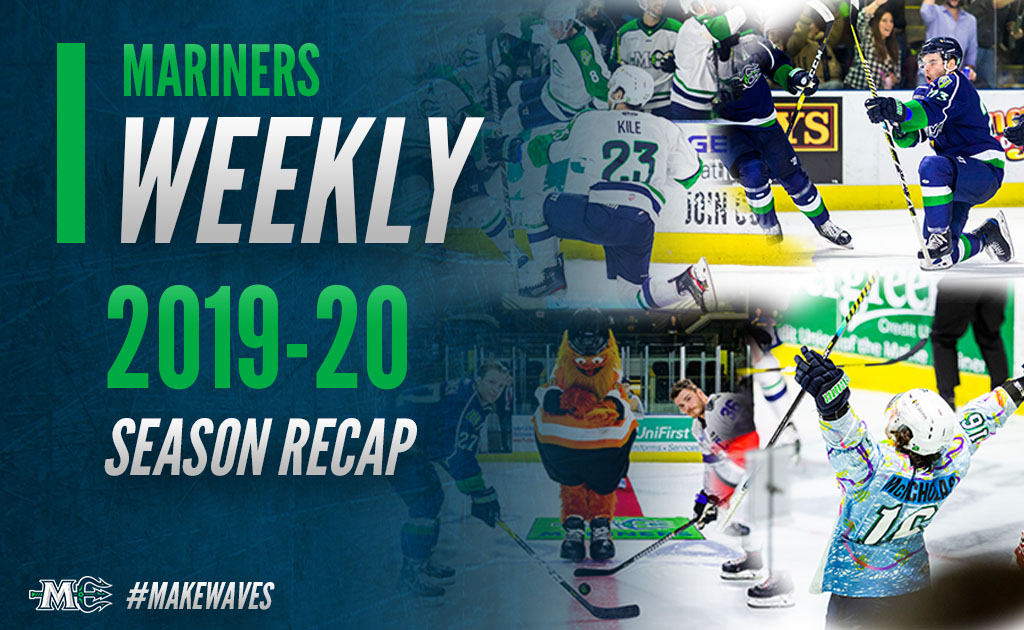 Mar. 24, 2020 – Regardless of the hockey team one played, worked, or rooted for in 2019-20, it will be a season they’ll never forget. An abrupt end to the ECHL season cut down the Maine Mariners schedule to 62 games, and took away what looked to be the first postseason appearance in franchise history. While we’ll never know how the 2019-20 season would have turned out in the end, the second season of Mariners hockey brought many exciting moments to the Cross Insurance Arena and the great hockey fans of Maine. Here are some significant moments that marked the shortened, but memory-filled season that was.

October 11th, 2019 vs. ADK: The Mariners open the season at home against the Adirondack Thunder, just as they did in their inaugural campaign. Unfortunately, history repeats itself and the Mariners suffer a 5-2 loss. Taylor Cammarata scores both Maine goals, attempting to bring them back from a 3-0 deficit late.

October 19th, 2019 @ REA: The Mariners get their first win of the season, spoiling the Reading Royals home opener. Tom McCollum(who would ironically become a Royal later in the season), makes 44 saves, and the Mariners put up 5 goals in a 5-3 victory. This would turn out to be their lone win in Reading for the season.

November 9th, 2019 vs. ADK: In front of the largest crowd of the season (4,588) on Military Appreciation Night, Jake Elmer nets the first of four Mariners hat tricks, leading the Mariners to a 5-1 win over Adirondack.

November 11th, 2019 vs. REA: With Gritty in the building, the Mariners defeat the Reading Royals, 4-3 in overtime. Alex Kile scores the game-winning goal just 23 seconds into the extra period, his first goal of the season. Kile would prove to be a clutch OT player for the Mariners all season long.

November 15th, 2019 vs. BRM: The Mariners honor NHL refereeing great, Maine Sports Hall of Fame inductee, and South Portland resident Wes McCauley, as they defeat the Brampton Beast, 6-3 despite letting a 3-0 lead slip away quickly late in the 2nd period. The win is the Mariners’ fourth in a row.

November 26th, 2019 vs. WOR: After losing two of three in Norfolk, the Mariners return home before Thanksgiving to win a wild one in overtime, 5-4 in their first home meeting of the season with the Worcester Railers. Ryan Gropp scores two goals while Kile gets his second overtime winner in the span of 15 days. This turns out to be the final game for Railers head coach Jamie Russell, who is relieved of his duties the following day.

December 6th, 2019 @ ADK: Jake Elmer registers his second hat trick against Adirondack in less than a month, capping it with the overtime winner to rescue the Mariners, who had blown a 4-1 lead. It was only Maine’s second ever win at the Cool Insuring Arena, but would turn out to be the start of a remarkable Mariners run in Glens Falls.

December 7th, 2019 vs. ADK: Elmer continues his dominance of the Thunder, scoring the Teddy Bear Toss goal early, and adding his fifth goal of the weekend to later tie the game at 4 in the third period. Ty Ronning’s shorthanded goal is the game-winner and Elmer goes on to win ECHL Player of the Week honors.

December 10th, 2019 vs. ADK: Francois Brassard makes his season debut and gets the win as Dillan Fox tips home a Brandon Crawley pass in the final minute of overtime to give the Mariners a 3-2 win and a three game sweep of Adirondack.

December 21st, 2019 @ ADK: The Mariners finish off back-to-back pre-Christmas 4-3 shootout wins in Adirondack when Taylor Cammarata scores in the fifth round to end it. Each game featured the Thunder tying it up late, but the Mariners getting the shootout bonus point. Maine goes into holiday break in sole possession of the fourth and final playoff spot in the North Division and a season high four games above .500.

January 3rd, 2020 vs. JAX: The Mariners and the Jacksonville IceMen meet for the first time ever, and Maine rallies from down 3-2 late in the 2nd to get a 5-3 win. Terrence Wallin’s first career hat trick leads the way as he scores one in each period, including the game winner in the third.

January 14th, 2020 vs. WOR: The Mariners snap a five game losing streak with a 3-2 win over Worcester at home. Rookie forward Mikael Robidoux enters the scene, stirring up physical play and drawing the Railers into penalties, ultimately allowing the Mariners to score back-to-back power play goals late in the 3rd to flip the score in their favor.

January 24th, 2020 vs. WOR: Returning from the All-Star break after playing right games in ten days, the Mariners explode for a franchise best eight goals – three by Ty Ronning. They score three goals in  a 58 second span in the 2nd period to pull away. Adam Huska makes his Mariners debut in between the pipes, and makes 43 saves.

January 29th, 2020 @ ADK: The Mariners win yet again in Glens Falls 3-0, as Connor LaCouvee picks up his third shutout in a span of 10 starts and his second in a row. Their win two nights later makes it six consecutive road victories over Adirondack. The streak goes to seven with another win in mid-February.

February 1st, 2020 vs. ADK: In a partnership with Agren and Make-A-Wish Maine, the Mariners wear jerseys designed by 11-year-old “Wish Kid” Ellie LaBree, and take down the Thunder, 3-2 in OT. Michael McNicholas scores the golden goal, which improves the franchise’s all-time “extra time” record to 20-3-2 (W-OTL-SOL).

February 7th, 2020 vs. WOR: LaCouvee makes 45 stops to lead the Mariners to a season high five wins in a row, squeezing out a 2-1 victory over Worcester. The streak ends the following night, with a 3-2 OT loss to Brampton, but the point streak gets to six.

February 11th, 2020 vs. BRM: The Mariners salvage the last of a three game home set with the Brampton Beast when Alex Kile gets his third OT winner of the season with less than a minute remaining. This would turn out to be the final win on home ice for the Mariners in 2019-20.

February 14th, 2020 @ NFL: The Mariners are in the wrong side of some ECHL history when the Newfoundland Growlers win their 19th consecutive home game, 5-1. The Mariners fall to 0-5-0-0 all-time at Mile One Centre, but the best is yet to come.

February 15th, 2020 @ NFL: Morgan Adams-Moisan scores a late power play goal to break a 1-1 tie and end the Growlers’ streak before it can reach 20. Francois Brassard gets his first of consecutive wins in between the pipes as the Mariners go on to take three in a row in St. John’s, becoming the first team to ever do so against the Growlers.

February 26th, 2020 @ REA: The Royals crush the Mariners, 8-0, the largest margin of defeat in franchise history. The Mariners play the game with just four defenseman due to injuries and a last moment illness to captain Zach Tolkinen.

February 28th, 2020 @ WHE: The franchise’s first trip to Wheeling marks a homecoming for Mariners Head Coach Riley Armstrong, who was an assistant for the Nailers from 2016-18. Terrence Wallin scores a pair – including the beneficiary of a Nailers “own goal,” and Greg Chase scores the game-winner in the 3rd. This becomes Maine’s final victory of the season.

March 10th, 2020 vs. NOR: The fateful final game of the season, unbeknownst to anyone. The Mariners battle back from a pair of one goal deficits but Norfolk’s J.C. Campagna scores on a breakaway with 2:05 left to hand the Mariners a 3-2 loss. The final goal of the Mariners’ season belongs to Cumberland native, Ted Hart.

The Mariners final record will read 32-26-3-1. They went 16-15-2-0 on home ice and 16-11-1-1 on the road (they had only 15 road wins in all of 2018-19). When the season halted, the Mariners were 11 points ahead of Adirondack for the fourth and final playoff spot in the North Division, and three points behind Brampton for third place. They had seven games remaining with Worcester, two with Adirondack, and one with Reading.