ST. JOHN’S, NL – January 9, 2019 – Down 5-2 with less than six minutes remaining, the Mariners got two goals to make things interesting, but couldn’t complete the comeback bid and fell 5-4 on Wednesday night at Mile One Center in St. John’s, Newfoundland. The Growlers swept the Newfoundland portion of the regular season head-to-head with the win, scoring 24 goals in the process.

After the Mariners fell behind on a Marcus Power power play goal at 10:19 of the first, Jason Salvaggio tied it up with a goal in his third straight game at 14:56. Darien Plouffe answered 38 seconds later and Zach O’Brien added another before the first period ended.

Greg Chase took a Michael McNicholas pass and tapped in his sixth goal of the season at 6:06 of the second, but that was answered when Matt Bradley was awarded and converted on a penalty shot at 18:19 to make it 4-2, which was the score through 40 minutes.

O’Brien scored his second of the game 10:51 into the third that appeared to be the dagger, but a Mariners power play chance sparked a rally. With the goaltender pulled and six attackers against four, Morgan Adams-Moisan deflected Ryan Culkin’s shot past Growlers goalie Brad Barone at 14:10. Less than 90 seconds later Salvaggio found his second goal of the game, cleaning up a loose puck in front with a top-shelf backhand. Michael McNicholas had the best look for a potential tying goal with just under two minutes remaining, but Growlers captain James Melindy came up with a key block to keep his team in the 5-4 lead, which they held as the seconds ticked off the clock.

Barone earned his first win as a Growler with 21 saves, with Hannu Toivonen was saddled with his second loss of the week, making 22 stops. The Mariners will have two days off before continuing their Canada trip in Brampton, Ontario on Saturday against the Beast at 7:00 PM. They’ll return home and greet Newfoundland on Wednesday, January 16th at 7:00 PM. Tickets can be purchased HERE or by calling 207-775-3458. 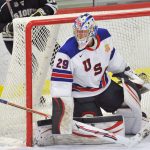