PORTLAND, MAINE – December 14, 2018 – The Maine Mariners scored three goals in the first 5:34, held off Adirondack the rest of the way, and added two more late as they got a 5-2 win over the Thunder on Friday night at the Cross Insurance Arena. Alex Kile, Ryan Culkin, Drew Melanson, and Jason Salvaggio all racked up multi-point games. The Mariners improved to 9-3-0-1 on home ice, with points in 10 of their last 11 home games.

Ryan Gropp started the scoring just 1:21 into the game when he drove up the left side and squeezed a shot between the post and arm of Thunder goalie Alex Sakellaropoulos. At 2:36, Alex Kile tried passing across to Michael McNicholas but the puck ended up banking in off a Thunder defender to give Kile a goal for the second straight “first game back” from AHL loan. At 5:34, Drew Melanson cleaned up a Ryan Culkin point shot to break an eleven game drought. The early barrage forced Thunder head coach Alex Loh to call timeout, but Adirondack would be shut out in the first period.

Less than a minute into the second period, Dennis Kravchenko broke through when he followed his initial shot which Brandon Halverson stopped, and cashed the rebound to make it 3-1. Defenseman Michael Sdao then scored his first goal of the season to make it 3-2 when John Edwardh spotted him from below the goal line and fed him a perfect pass. The Mariners managed to escape the period with a 3-2 lead.

Playing a much stronger third period, the Mariners got insurance at 15:29 of the final frame when Kile finished a 2-on-1 by dragging the puck into the middle and beating Sakellaropoulos top shelf. Under two minutes later, John Furgele went high glove on another odd man rush to stretch the lead to three. It was Furgele’s second goal in three games. Alex Kile’s two goal performance marked his third of the season.

In net, Brandon Halverson turned aside 28 of 30 while Alex Sakellaropoulos made 21 saves on 26 shots.

The Mariners finish their busy week tomorrow night at the DCU Center in Worcester with a 7:05 faceoff against the Railers. They return home after the holidays against Manchester on Thursday, December 27th at 7:00 PM. They also host Worcester on Friday, December 28th at 7:15 PM for a 1-2-3 Friday, Nickelodeon Takeover Night, and First Responders Night. Tickets can be purchased at MarinersOfMaine.com or by calling 207-775-3478. 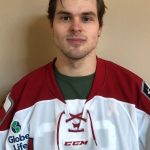