PORTLAND, ME – October 9th, 2019 – The Mariners have traded forward Brett Supinski to the Idaho Steelheads in exchange for future considerations, the team announced Wednesday. Supinski is a rookie forward out of Union College, whom the Mariners signed to an SPC over the summer.

Supinski is a 6’0, 175-pound forward from Collegeville, PA. He finished up his NCAA career last season with Union College (Schenectady, NY), where he averaged 27 points over four seasons. The Mariners signed Supinski in late July, and he skated in the team’s lone preseason game this past Saturday against the Worcester Railers at the Rinks At Exeter in Exeter, New Hampshire.

The Steelheads now owe a future consideration to the Mariners.

The second season of Maine Mariners ECHL hockey kicks off this Friday, October 11th at home when the Adirondack Thunder visit the Cross Insurance Arena for a 7:15 PM faceoff. Tickets to opening night and all 36 home games are available at MarinersOfMaine.com. Full and half season plans along with 12-game mini plans, flex packs and group tickets are also available. For more information, go to MarinersOfMaine.com, call 833-GO-MAINE, or visit the Mariners front office at 94 Free St. in Portland. 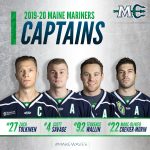