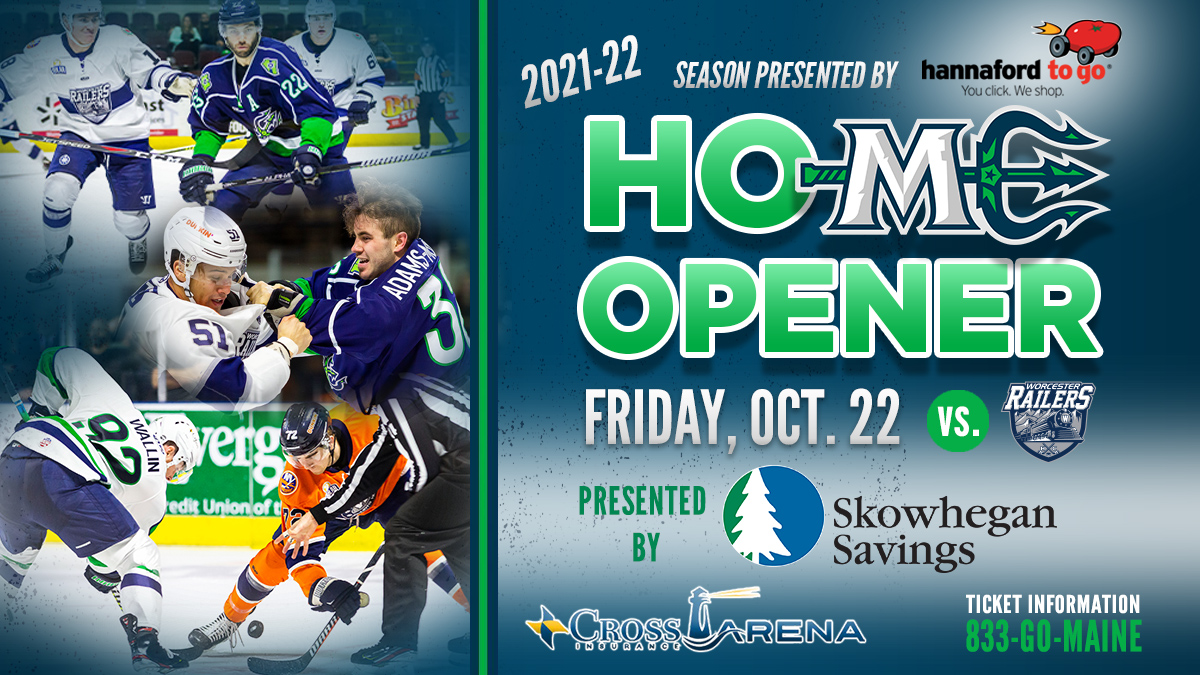 PORTLAND, ME – March 8th, 2021 – The Maine Mariners will open the 2021-2022 season, presented by Hannaford to Go, at the Cross Insurance Arena against their rivals, the Worcester Railers on Friday, October 22nd. The 2021-22 home opener will mark the first Mariners regular season game in over 19 months, after the COVID-19 pandemic cancelled the end of the 2019-20 season and the entirety of 2020-21.

“It is a special day to be able to put a home game on the calendar when the Mariners will hit the ice at the Cross Insurance Arena,” said Adam Goldberg, Mariners Vice President of Business Operations. “Finally, a finish line for the wait, and a starting line for the season to come. To say that I am looking forward to seeing our fans, partners and event staff would be a massive understatement. Is it October yet?”

The Mariners last played on March 10th, 2020, when they fell 3-2 at home to the Norfolk Admirals. The final ten regular season games and a likely playoff run were cut short by the pandemic. In mid-November 2020, the Mariners and the other five ECHL North Division teams, opted out of the 2020-21 season.

There are currently 14 teams participating in the 2020-21 ECHL season. In mid-February, the league announced that October 22nd will be the 2021-22 season opening date, with the conclusion of the regular season slated for April 17th, 2022.

The Mariners and Railers played 11 times in 2019-20, with the Mariners posting a 7-2-1-1 record. Seven more meetings were scheduled before the season’s cancellation. Over the first two seasons of the head-to-head, the Mariners are 17-6-1-1 against the Railers, including 11-1-1-0 at the Cross Insurance Arena. The Railers joined the ECHL in the 2017-18 season, one year before the Mariners’ inaugural campaign.

“As we look forward to the start of a new season and getting the players back up to Maine, we as a staff couldn’t be more excited,” said Riley Armstrong, Mariners Head Coach and Assistant General Manager. “The players are excited to be coming back to Maine and I think the fans should be as well. What’s even better is that we get to open against the Worcester Railers. We have played some very exciting games against the Railers in the first two years with many games going to overtime and shootouts.”

Armstrong has seen the Maine-Worcester rivalry from both sides, having played for the AHL’s Worcester Sharks from 2006-2009, when they played often against the Portland Pirates.

“As we finally begin our third season, we hope the state of Maine can begin to embrace the Mariners the way they once embraced the Pirates,” said Armstrong.

The 2021-22 Mariners season is presented by Hannaford To Go. Fans can put down a deposit of $50 on full season tickets for the 2021-22 season here. Half season, 12-game mini plans, and 10-ticket flex plans are also available for purchase, starting at $170. Single game and group ticket information will be available in the coming months, as well as a full 2021-22 schedule. More information on ticketing options is available by calling 833-GO-MAINE, emailing mariners-sales@comcastspectacor.com, or by visiting MarinersOfMaine.com.

A BUSY WEEKEND OF COMMUNITY EVENTS
Scroll to top