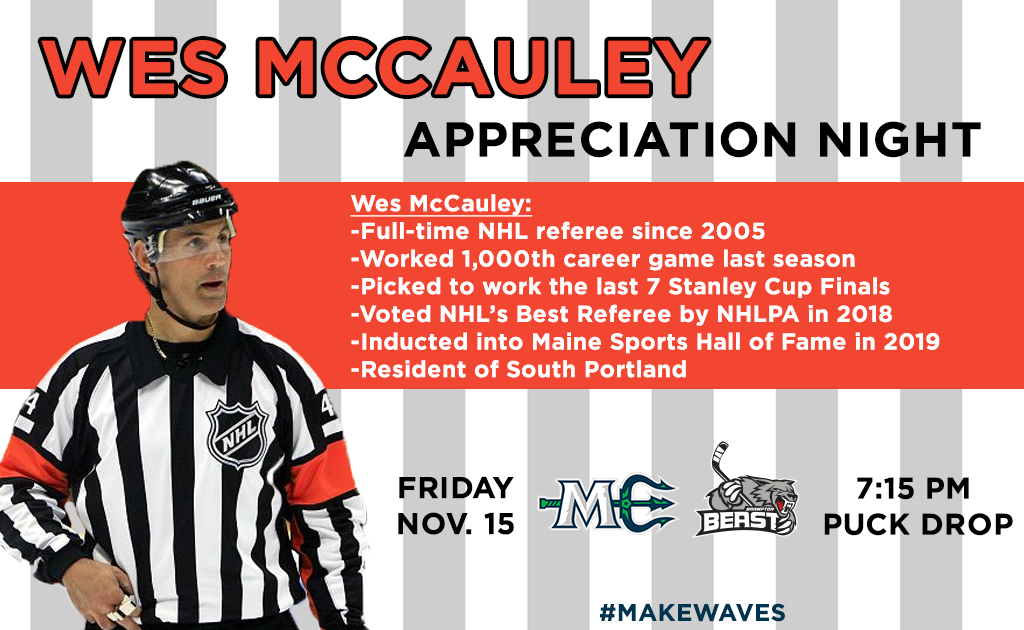 PORTLAND, ME – August 8, 2019 – The Maine Mariners announced on Thursday that Friday, November 15th, 2019 will be “Wes McCauley Appreciation Night” at the Cross Insurance Arena, when the Mariners host the Brampton Beast at 7:15 PM. McCauley, a South Portland resident, has been a full time National Hockey League referee since 2005, also working in the ECHL and AHL after a brief professional playing career.

McCauley, 47, was born in Georgetown, Ontario and is a second generation NHL referee, his father John working in the NHL and serving as the league’s Director of Officiating from 1986-89. Wes played Division I college hockey at Michigan State as a defenseman, and went on to be an eighth round draft pick of the Detroit Red Wings in 1990. Although he’d never play in the NHL, McCauley spent a season in the ECHL with the Knoxville Cherokees, and played professionally for five seasons, finishing his playing career in Italy after the 1996-97 season.

After retiring from playing, McCauley decided to follow in the footsteps of his father and join the officiating ranks. He began working junior hockey games in his home province of Ontario, elevating quickly into the ECHL, and in 2001 – the American Hockey League. McCauley made his NHL debut as an official on January of 2003, and after working two AHL Calder Cup Finals, became a full time NHL ref in the 2005-06 season. Since 2013, McCauley has been chosen to work every Stanley Cup Final series, missing the 2018-19 Cup Finals due to injury. In the spring of 2018, he was voted the NHL’s best referee in a poll conducted by the NHL Players Association. On December 23rd, 2018, he worked his 1,000th NHL game in Las Vegas, when the Golden Knights hosted the Los Angeles Kings.

McCauley is a long time resident of South Portland, where his wife, Bethany grew up. The couple have three children. On May 19th, 2019, McCauley was inducted into the Maine Sports Hall of Fame.

Fans will be able to get autographs from McCauley in the concourse during the first intermission of the game on November 15th. There will also be a video compilation on the scoreboard showing some of McCauley’s best “mic’d up moments.” All fans are encouraged to wear officiating stripes to honor Wes. He will finish his night by joining Mariners broadcaster Michael Keeley for commentary in the third period of the webcast on Mixlr and ECHL.tv.

The second season of Maine Mariners ECHL hockey kicks off October 11th at home when the Adirondack Thunder visit the Cross Insurance Arena for a 7:15 PM faceoff. Full and half season plans along with 12-game mini plans, flex plans and group tickets are on sale now by calling 833-GO-MAINE or visiting the Mariners front office at 94 Free St. in Portland. Single game tickets will go on sale September 16th.