PORTLAND, ME – January 5, 2019 – After a rare poor performance on home ice on Friday, the Mariners bounced back to defeat the Brampton Beast 3-1 on Saturday night in front of 4,733 fans on “Throwback Night” at the Cross Insurance Arena. Sporting orange and black throwback jerseys paying tribute to the original Maine Mariners organization, the Mariners built a 3-0 lead and their netminder Brandon Halverson did the rest.

Just 1:25 into the game, Ty Ronning pounced on a rebound let go by Beast goalie Etienne Marcoux to extend his point streak to seven games and give the Mariners a 1-0 lead. Jason Salvaggio and John Furgele picked up assists on the goal. With the score still 1-0 early in the 2nd, Morgan Adams-Moisan redirected a Derek Pratt shot to double the lead at 1:09 of the middle frame. Halverson turned aside 23 shots through two periods to keep the Mariners in control.

At 5:47 of the third, Jason Salvaggio escaped on a 2 on 1 and beat Marcoux with a snipe to make it 3-0. Joe Kalisz and recent addition Dillan Fox picked up assists. On the power play at 14:09, Brampton pulled their goaltender and Jonathan Racine beat Halverson with a shot from the point to put the Beast on the board. That was as close as the Beast would come, as Halverson racked up 37 stops for his 13th win.

The Mariners opened up a six point gap in the standings with the Beast with their win and now embark on a Canada trip that takes them to Newfoundland on Tuesday and Wednesday and Brampton next Saturday and Sunday. The Mariners will return home on Wednesday, January 16th to host Newfoundland at 7:00 PM. It’s Special Olympics night. Tickets to all home games can be purchased HERE or by calling 207-775-3458. 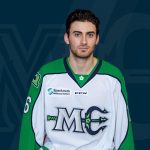 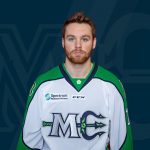 WALLIN RETURNED ON LOAN FROM HARTFORD
Scroll to top