TROIS-RIVIERES, QC – December 17, 2021 – The Mariners claimed their first extra time victory of the season on Friday night at the Colisee Videotron in Trois-Rivieres, defeating the Lions 4-3 in a shootout. Cam Askew scored the only goal of the mini-game, while Callum Booth capped a great overall performance by stopping all three Lions shooters.

The Mariners got on the board first, using their power play. Patrick Shea set up in the slot and tipped a pass from Jason Horvath into the top shelf for a 1-0 Maine lead at 1:31 of the opening frame. Former Mariner Shawn St-Amant then scored a pair of goals in the period to give the Lions the edge. First, at 10:20, he finished a feed from Jonathan Joannette to tie it up with a shot from a severe angle. Then, at 12:52, St-Amant scored a power play goal, camped beside Mariners netminder Callum Booth, and deflected a feed from Olivier Archambault. The Mariners took 18 minutes in penalties in the first period, including 12 from defenseman Garrett Clarke, who was assessed a match penalty and a five minute major late in the frame.

Playing in his 17th game of the season, Mariners forward Conner Bleackley got his long-awaited first goal at 5:11 of the 2nd period, sneaking a shot from the goal line between Lions netminder Kevin Poulin and the post, to tie the game at 2. The Mariners reclaimed their lead a little over four minutes later, using the power play again. Horvath fed Mathew Santos for a one-timer that got past Poulin through tangled players in front. Santos’ 6th goal of the season made it 3-2 Maine. Before the period expired, Trois-Rivieres got the equalizer from Jonathan Joannette, swatting home a bouncing puck behind Booth. It was 3-3 after two.

Both teams had ample opportunities in the 3rd period, each with 11 shots, but the game proceeded to overtime. The Mariners had the better chances in the sudden death frame, outshooting the Lions, 6-0. Trois Rivieres’ Anthony Nellis rang a goal post. After seven minutes of scoreless 3-on-3, Cam Askew beat Poulin in the 2nd round of the shootout, while Booth stopped all three Lions shooters, finishing with a save on their leading scorer, Olivier Archambault. Booth made 37 saves in the game to earn his 2nd win of the season. Poulin stopped 36 in the loss. The Mariners snapped a 7-game road losing streak.

The Mariners (8-10-3-1) and Lions finish their series tomorrow afternoon at 3:00 PM and then enjoy a week off for the holiday break, returning to play on Saturday, December 26th at Worcester. The next home game is Wednesday, December 29th, also against the Railers, a 3:00 PM faceoff and “Kids Day.” The first 500 kids will receive a Mariners silicone bracelet and a postgame family skate will follow. The Mariners are also home on New Year’s Eve and New Year’s Day, offering one-time individual ticket purchases in premium seating areas (Poseidon’s Platform on New Year’s Eve and the Ice Level Lounge on New Year’s Day), each which include access to a cash bar and other complimentary food and drink specials. The New Year’s Eve celebration is presented by Kit NA Brewing, as the Mariners host Trois-Rivieres at 5:00 PM. Individual tickets for all games can be purchased online at MarinersOfMaine.com/tickets or by visiting the Trusted Choice Box Office inside the Cross Insurance Arena. 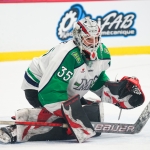 LIONS BURST OUT AFTER MARINERS STRIKE FIRST
Scroll to top