GLENS FALLS, NY – January 7, 2022 – Nick Master’s breakaway goal midway through the second period held up as the game-winner in a 3-2 Mariners road victory on Friday night against the Adirondack Thunder. Keltie Jeri-Leon was a key playmaker, setting up Master’s goal, plus one other, while Jeremy Brodeur stopped 12 third period shots to help the Mariners to a new season high four-game win streak.

In the opening period of the game, Adirondack’s Shane Harper bookended the frame with a pair of goals. Midway through the period, his wraparound attempt leaked through the pads o Brodeur to give the Thunder a 1-0 lead. A little over two minutes later, the Mariners found the equalizer when Zach Malatesta’s point shot went off the pad of Thunder goalie Brandon Kasel right to a waiting Conner Bleackley, who tapped home his third goal of the season. With 2:58 left in the period, Harper struck again, taking a feed from Sebastian Vidmar just outside the Mariners blue line and breaking in to beat Brodeur’s glove.

In the middle stages of the second period, Jeri-Leon made his first mark on the game, setting up Mathew Santos for the game-tying goal at 7:15. Jeri-Leon rushed into the zone and fed Santos on his right wing, who ripped a shot past the glove of Kasel to make it 2-2. At the 9:33 mark of the period, Nick Master was assessed a penalty for cross-checking, but planned his escape from the box perfectly. Jeri-Leon carried the puck into the neutral zone just as Master’s penalty was expiring, and Master took a breakaway pass, skated in and deked Kasel backhand-forehand to give Maine its first lead at 11:39. It would be the only lead they would need.

Brodeur was key in the third, turning aside all 12 Thunder shots in their effort to find the equalizer. In total, he made 33 saves to earn his 8th win. Kasel made 25 stops in the losing effort. The Mariners have now handed the Thunder back-to-back losses, leapfrogging them in the standings and moving into sole possession of third place in the North Division. They are now just one point behind Trois-Rivieres for second place.

The Mariners (12-11-3-1) and Thunder will continue this series this weekend at the Cross Insurance Arena. Saturday’s game begins at 6 PM and will feature a Beacon bobblehead giveaway to the first 1,000 fans, presented by Fabian Oil. The game is also sponsored by KitNA Brewing. Sunday is a 3:00 PM start and is “Affiliation Day,” featuring the return of the Bruins-themed throwback jerseys. Individual tickets for all games can be purchased online at MarinersOfMaine.com/tickets or by visiting the Trusted Choice Box Office inside the Cross Insurance Arena. 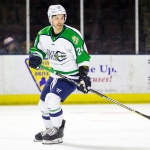 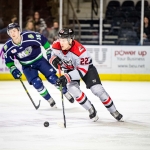