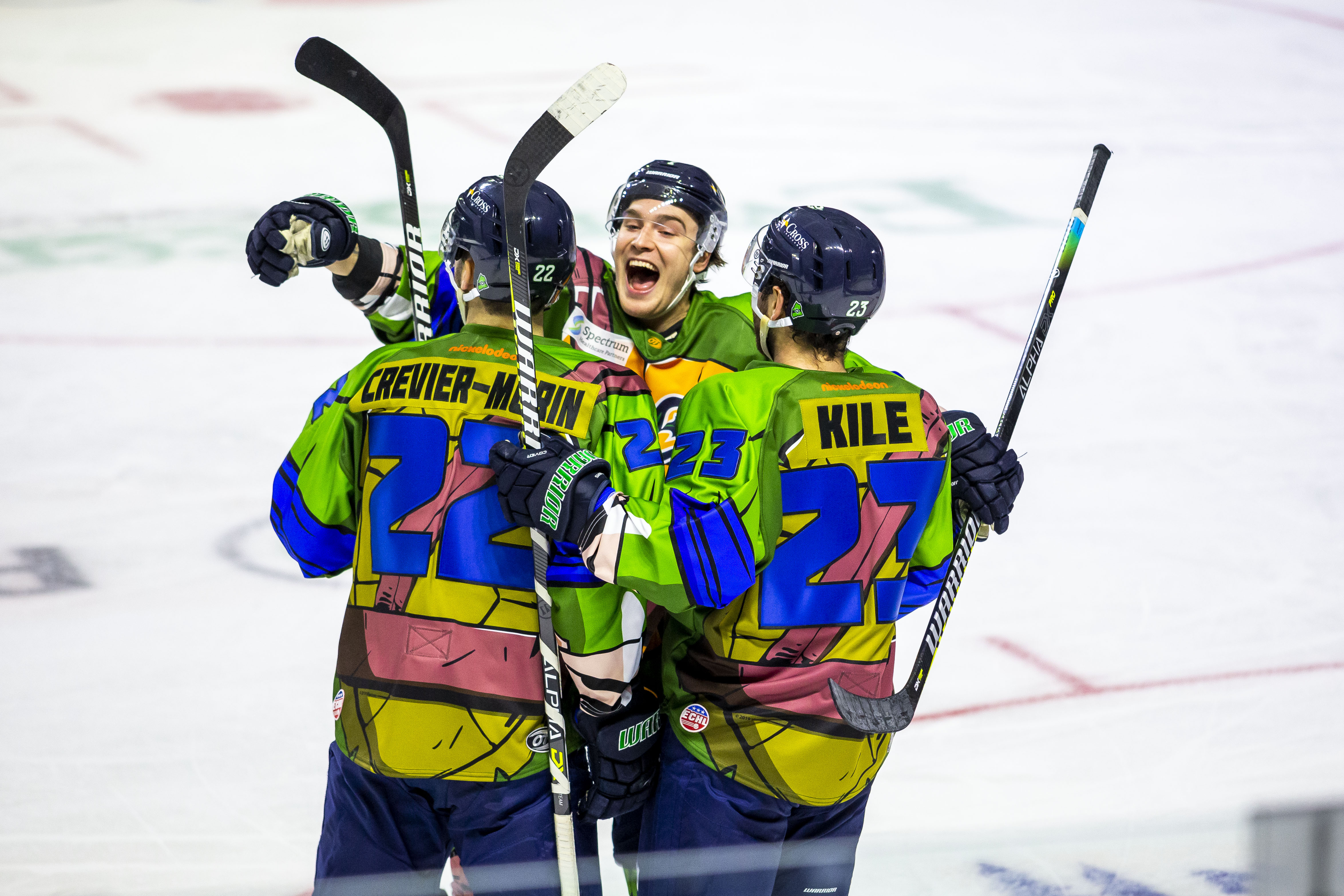 PORTLAND, ME – December 26, 2019 – Twelve different skaters got on the scoresheet in a 5-1 Mariners win over the Adirondack Thunder on Thursday night at the Cross Insurance Arena. With the win, the Mariners went six-for-six in their meetings with Adirondack in the month of December, and won their seventh out of eight games in the month overall.

“I think it was the work that was put in when we weren’t even on the ice,” said Mariners Head Coach and Assistant General Manager Riley Armstrong about the team’s December sweep of their division rivals. “Breaking down video, making sure the guys were prepared and when the guys are prepared and they’re all buying into the system, I think it carries over onto the ice. I think that’s what kind of separated us during these games.”

The Mariners played a strong opening period and took a 1-0 lead at 7:35 when Ryan Dmowski finished a pretty passing play, facilitated by Ty Ronning and Ryan Culkin. The Mariners pelted Thunder goaltender Eamon McAdam with 14 first period shots and had several chances to extend their lead, but took the 1-0 advantage into the locker room.

Dmowski struck again at 2:27 of the second period, when Jake Elmer fed a him a saucer pass from the right wing, springing Dmowski in alone to beat McAdam to his stick side at the near post. The score remained 2-0 until 10:44 of the middle frame when defenseman Marc-Olivier Crevier-Morin beat McAdam’s glove with a shot into the upper to corner to stretch the lead to three. Just over a minute later, Adirondack’s Mike Szmatula beat Connor LaCouvee with a slap shot in the slot to bring Adirondack back within two. Not long after, however, Greg Chase brought the lead back to three when he followed his own shot into the low slot and lifted a second chance over McAdam making it 4-1, which was the score at the end of two.

“I just came into the game today with a positive attitude and I didn’t let anything phase me and I shot the puck and had confidence,” he said.

Adirondack got 15 shots on LaCouvee in the third, but he and the Mariners defense preserved the three goal lead before Dillan Fox hit the empty net from beyond the red line at 17:37 to make it 5-1.

LaCouvee made 33 stops for his 8th win. McAdam made 31 saves. It was just the fourth time this season that the Mariners outshot their opponent.

“I think the guys did such a great job boxing out in front,” said LaCouvee. “I saw a lot of easy shots. A lot of shots from the wings, contested shots. All our d-men and forwards did a good job limiting scoring chances.”

The Mariners are a season high five games over .500 at 15-10-0-1, winning seven of their last eight games, and now pulling ahead of Adirondack in the standings with 31 points. They’re only three behind the Reading Royals for third place, who are in town tomorrow night.

The puck drops at 7:15 PM on Friday and it’s STEM Night – focusing on science, technology, engineering, and mathematics, including a robotics presentation at intermission. It’s also a 1-2-3 Friday, featuring $1 Aquafina water, $2 Pepsi products, and $3 Bud Lights through the start of the 2nd period. It’s also the last chance to get the “Skate and Scarf” package, where fans can get a ticket to the game, a Mariners scarf, and a pre-game skate with Beacon the Puffin plus a snack buffet. Only 100 packages are available.