GLENS FALLS, NY – December 20, 2019 – Adirondack rallied back twice in the third period, but the Mariners prevailed in five rounds of a shootout to top the Thunder 4-3 on Friday night at the Cool Insuring Arena. The win put the Mariners one point behind Adirondack for the fourth and final North Division playoff spot heading into the final game before holiday break.

The opening period was marked by a standout performance by Adirondack rookie netminder Joe Murdaca who stopped all 15 Maine shots in the first period of his ECHL career. Mariners goaltender Connor LaCouvee matched his counterpart, stopping 11 of 11 for Maine.

At 5:58 of the 2nd, Taylor Cammarata stole the puck away in the Mariners zone and sprung Greg Chase on a breakaway. Chase streaked in and ripped a shot over Murdaca’s glove to break the scoreless tie. Teams traded chances through the middle frame but it remained 1-0 until 17:54 when Ryan Culkin’s seeing eye shot found its way through Murdaca to double the Maine lead. Jake Elmer and Alex Kile picked up helpers on Culkin’s fifth of the season. LaCouvee was again perfect in the second, stopping 15 of 15 Thunder shots.

Adirondack finally broke through two minutes into the third when Robbie Payne slid a puck under LaCouvee, who had made a great save on James Henry, but the Mariners couldn’t clear the zone. The Mariners continued to control the play but Matt Salhany got free, drove wide and cut across the crease to beat LaCouvee tie the game at 6:42. Jake Elmer was called for a penalty late in the third, but it was the Mariners that broke the tie. Terrence Wallin, working from below the Adirondack goal line, surprised Murdaca with a short side rising shot, to give Maine a 3-2 lead. Kile picked up his second assist of the game on the Mariners’ third shorthanded goal of the season. With the extra attacker on the ice and just 5.6 seconds left, Alex Tonge’s fake shot and pass found Mike Szmatula on the backdoor to tie the game and force overtime.

A scoreless 3-on-3 session posited Adirondack’s league leading fourth shootout and only Maine’s second. The goalies were perfect through four rounds and Dillan Fox finally found the net, beating Murdaca low to the stick side in round five. LaCouvee stopped Tonge’s backhand to seal the win. LaCouvee made 36 stops to earn his seventh win and fourth in a row. Murdaca was the tough luck loser in his ECHL debut, with 33 saves. Adirondack is now winless in their last eight.

The Mariners face off in Glens Falls against the Thunder again tomorrow night at 7 PM and are back home on December 26th and 27th to host Adirondack and Reading. Thursday, December 26th is a 7 PM faceoff and is Nickelodeon Takeover Night featuring Teenage Mutant Ninja Turtles Specialty Jerseys. The puck drops at 7:15 PM on Friday, December 27th and is STEM Night – focusing on science, technology, engineering, and mathematics. It’s also a 1-2-3 Friday, featuring $1 Aquafina water, $2 Pepsi products, and $3 Bud Lights through the start of the 2nd period. Both games also feature the “Skate and Scarf” package, where fans can get a ticket to the game, a Mariners scarf, and a pre-game skate with Beacon the Puffin plus a snack buffet. Only 100 packages are available for each game. 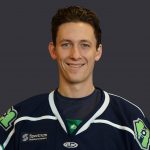