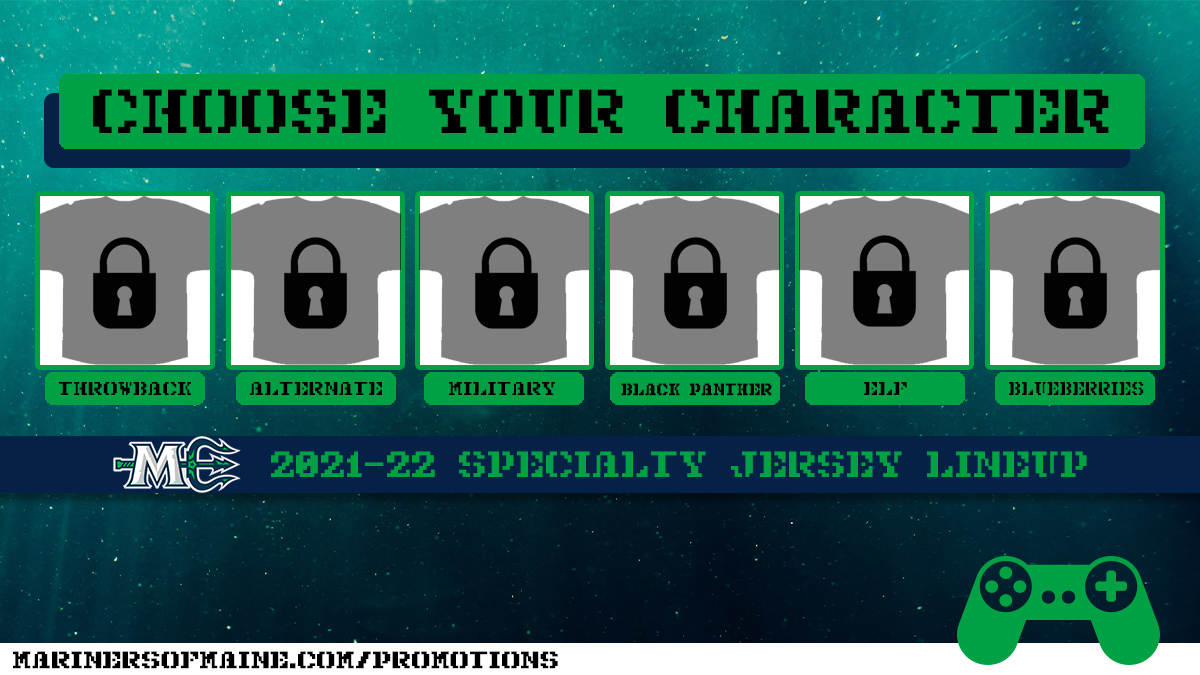 PORTLAND, ME – September 15, 2021 – The Maine Mariners announced their lineup of specialty jerseys for the 2021-22 season on Thursday, with five of them to be featured this season, plus the long-awaited debut of the green alternate jersey.

To commemorate the new affiliation with the Boston Bruins, the Mariners will wear a throwback jersey three times throughout the season, replicating the last time the Maine Mariners were Bruins affiliates (1987-1992). Included in these three games is home opener on October 22nd, presented by Skowhegan Savings.  The other two dates that will feature the black and gold throwback are “Affiliation Day” on January 9th and “Throwback Night” on February 19th.

Last fall, Mariners fans had the chance to vote on a social media poll between two military-themed camouflage jerseys. The winning jersey will be worn during this season’s Military Appreciation Night, presented by Martin’s Point – November 12th.

November 26th is the annual Marvel Super Hero™ night, which will feature the theme of the 2018 Marvel film, “Black Panther.” Black Panther was also chosen in an online fan vote, defeating Iron Man, Loki, and Winter Soldier. On Saturday, December 4th, the Mariners will wear “Elf” jerseys, from the popular Warner Brothers holiday film featuring Will Ferrell. December 4th is also the Teddy Bear Toss game. Both the Black Panther and Elf jerseys will be auctioned through the ECHL via Meigray.

The final specialty jersey is the return of an inaugural season favorite – the Maine Wild Blueberries. This year’s edition will take on a slightly different look, but will once again call back to “what could have been” in the team-naming contest before the franchise hit the ice. Wild Blueberries Night, presented by Oakhurst Dairy, is set for March 26th.

More information on the specialty jersey auction procedures will be available closer to each game night.