PORTLAND, ME – June 17, 2022 – The Maine Mariners announced their first signing for 2022-23 today, bringing back Cam Askew for his second season. Askew was a major part of the Mariners success in 2021-22, leading the team in games played and power play goals, and finishing second on the squad in overall goal scoring.

Now four years deep into his ECHL career, Askew returned home to New England when the Mariners acquired him in a mid-September trade from the South Carolina Stingrays last fall. Coming off a disappointing final season as a Stingray, Askew was rejuvenated in Maine, posting a career-high 23 goals. He was the top power play producer for the team as well, leading the way with 10 power play goals, a new Mariners single season record. In a remarkable stretch from February 19th through February 26th, Askew scored a power play goal in five consecutive games.

Askew came up clutch down the stretch as well, scoring three goals in the final homestand of the regular season, which resulted in the Mariners clinching a playoff berth. He carried the success over into the playoffs, scoring goals in games 3, 4, and 5 of the North Division Semifinals series against the Reading Royals. He was extremely durable throughout the entire season and postseason, missing just three games. Askew was named the “Unsung Hero” of the 2021-22 Mariners team by the coaching staff.

“I’m so excited to be back in Portland,” said Askew. “I love the city and fans and can’t wait to do something special with the group of guys we have.”

Askew turned 25 years old in May and is originally from Boston, Massachusetts. He spent his entire professional career with South Carolina prior to coming to Maine. Before turning pro, he played five seasons in the Quebec Major Junior Hockey League.

The Mariners 2022-23 season is once again presented by Hannaford To Go, and begins on Friday, October 21st at Trois-Rivieres, followed by the home opener on Saturday, October 22nd also against the Lions. Full and half season packages plus 12-game mini plans for the 2022-23 season are on sale now by calling 833-GO-MAINE or visiting the Mariners front office at 94 Free St. in Portland. Prospective package holders can also put down a deposit or fill out an inquiry form at MarinersOfMaine.com. Single game tickets will go on sale in September. 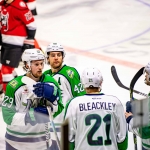 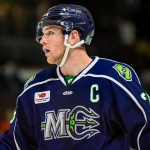