PORTLAND, ME – February 8, 2020 – David Vallorani scored at 5:23 of overtime to give the Brampton Beast a 3-2 win over the Maine Mariners on Saturday night at the Cross Insurance Arena. The Mariners battled back from a 2-0 deficit to tie the game in a dominant third period, but have now been beaten by Vallorani twice in overtime this season. The Mariners win streak came to an end, but their point streak was extended to six games.

Brampton scored a pair of goals in a 12 second span in the opening period to grab the early momentum. At 6:20, Lindsay Sparks attempted to make a pass to the point, that deflected off of Mariners forward Dillan Fox and back into the Maine net. On the ensuing shift, Daniel Leavens got free in the slot and beat Brassard’s stick side to double the Beast lead. The Mariners and Beast each had 12 first period shots.

It took until late in the 2nd for the Mariners to get on the board, but their first goal came shorthanded at 16:33 of the middle frame when Terrence Wallin found Alex Kile for a cross-slot one-timer. Brampton carried the 2-1 lead into the third, but Conner Bleackley, making his Maine debut, tied the game just 3:05 into the third, ripping a short side shot past Brampton goalie Alex Dubeau during 4-on-4 play. Kile made a drop pass for his second point of the game to set it up. Bleackley was noticeable throughout the game, getting elevated ice time after Greg Chase was a late scratch.

“It was good,” said Bleackley, who was acquired by the Mariners on January 14th from the Idaho Steelheads, but hadn’t played since January 12th with an injury. “It’s the longest I’ve been off in a while and coming into my first game with a new team I thought I got better as the game went on.”

The Mariners outshot Brampton 14-4 in the third and had the potential go-ahead goal disallowed due to a quick whistle. They also got a late power play when TJ Melancon went off for holding, but the Beast were able to kill it and force overtime.

Both teams traded possession time in OT, with Francois Brassard making a pair of big glove saves, but the Beast found the winner at 5:23 when David Pacan found Vallorani to Brassard’s left, who lifted one over the sprawling Maine goalie. Vallorani leads the ECHL with eight game-winning goals. He also beat the Mariners in overtime on January 17th at the CAA Centre.

The Mariners and Beast wrap up the “Giving 3kend,” sponsored by Three Dollar Deweys tomorrow at 3 PM for the “Underwear Toss,” with fans encouraged to throw new packages of underwear onto the ice after the first Mariners goal to benefit Preble Street Teen Services. The Mariners and Brampton will play again on Tuesday at 7 PM. 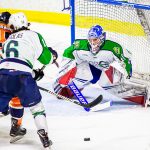