PORTLAND, ME – January 21, 2022 – Tristan Langan had a hat trick and an assist while Tyler Bird registered five points as the Orlando Solar Bears defeated the Maine Mariners 6-2 on Friday night at the Cross Insurance Arena. The Mariners, who trailed 3-0, rallied back to pull within one early in the 3rd, but couldn’t complete the comeback.

For the second straight game, the Mariners dug themselves into a 3-0 hole. Tristin Langan scored a pair of goals and assisted on a third by Andrew McLean to help the Solar Bears build a three goal advantage. The final two goals each game in the last 2:46 of what was an otherwise even period, with Orlando holding just a 9-8 shot advantage.

The second period was another even frame, with each team registering 11 shots. Ian McKinnon got the Mariners on the board at 6:39, when he followed a drive into the zone by Connor Doherty and ripped a shot just under the crossbar. Jake Bricknell was credited with a secondary assist on the goal.

Early in the third, Pascal Laberge ripped home a power play goal to bring Maine within one. With helpers from Zach Malatesta and Cam Askew, Laberge beat Brad Barone with a wrister from the top of the left circle. The comeback attempt was stifled by a Jake Transit goal at 9:18 of the second, as he cleaned up a rebound from a bad angle Tyler Bird shot. Bird would finish a career game by assisting on Langan’s hat trick market at 15:14 and then hitting the empty net at 19:38.

The Mariners and Solar Bears play game two of their three game weekend series on Saturday night with a 6:00 PM faceoff. It’s “Game Night” and Spicy Saturday. The game is presented by the Holiday Inn By the Bay and all “3Kends” are presented by $3 Deweys. Individual tickets for all games can be purchased online at MarinersOfMaine.com/tickets or by visiting the Trusted Choice Box Office inside the Cross Insurance Arena. 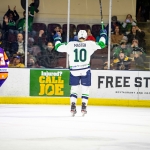