PORTLAND, ME – January 30, 2022 – Cedric Desruisseaux scored the only goal in a shootout as the Trois-Rivieres Lions edged the Mariners 3-2 on Sunday afternoon at the Cross Insurance Arena. The Mariners trailed the game 2-0 and rallied to force overtime and earn a valuable standings point after Mathew Santos tied the game late in the 3rd period with the goalie pulled.

For the third straight game, the Mariners faced a 1-0 deficit through 20 minutes. Cameron Hillis, who is one of the few ECHL players to have seen NHL action this season, opened the scoring at 12:54 of the first when he redirected Olivier Galipeau’s shot from the right point past Mariners stopper Callum Booth.

Early in the 2nd, the Lions went to the power play and doubled their lead. Rookie William LeBlanc continued the hot start to his ECHL career, scooping up a rebound and beating Booth. The Mariners felt there should have been a whistle blown when Brendan Robbins suffered an apparent injury during the penalty kill, and were assessed an ensuing bench minor for unsportsmanlike conduct. Midway through the frame, Robbins exacted some revenge, when he got the Mariners on the board. Mathew Santos ripped a shot from the right wing that dribbled behind Lions goalie Tristan Berube and sat to his right for Robbins to push into an open net. Maine had two late period power play chances but came up empty and trailed 2-1 heading to the third.

The Mariners outshot the Lions 13-6 in the third period, but were forced to pull Booth with two minutes remaining to mount an effort to get the game tied. Mathew Santos ripped off a perfect shot from the left wing circle off the post and in to even things at two with 1:28 left. The overtime was highly entertaining with the Mariners having quality chances in the first half and the Lions having two breakaways denied by Booth in the latter stages.

In the shootout, Berube stopped Cam Askew and Nick Master while Booth turned aside Justin Ducharme. Desruisseaux scored in the bottom of the 2nd round and Berube stopped Santos to end the game.

The Mariners (16-15-3-2) will head on the road for their next seven games, beginning Wednesday night at Trois-Rivieres for the first of three in Quebec as tonight’s matchup gets an encore. They’ll make their return to the Cross Insurance Arena on Friday, February 18th against the Newfoundland Growlers at 7:15 PM for Star Wars Night and a 1-2-3 Friday. Saturday, February 19th is “Throwback Night” against Trois-Rivieres at 6 PM. Individual tickets for all games can be purchased online at MarinersOfMaine.com/tickets or by visiting the Trusted Choice Box Office inside the Cross Insurance Arena. 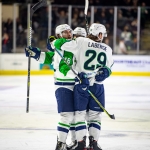 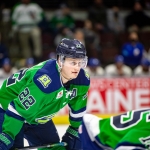