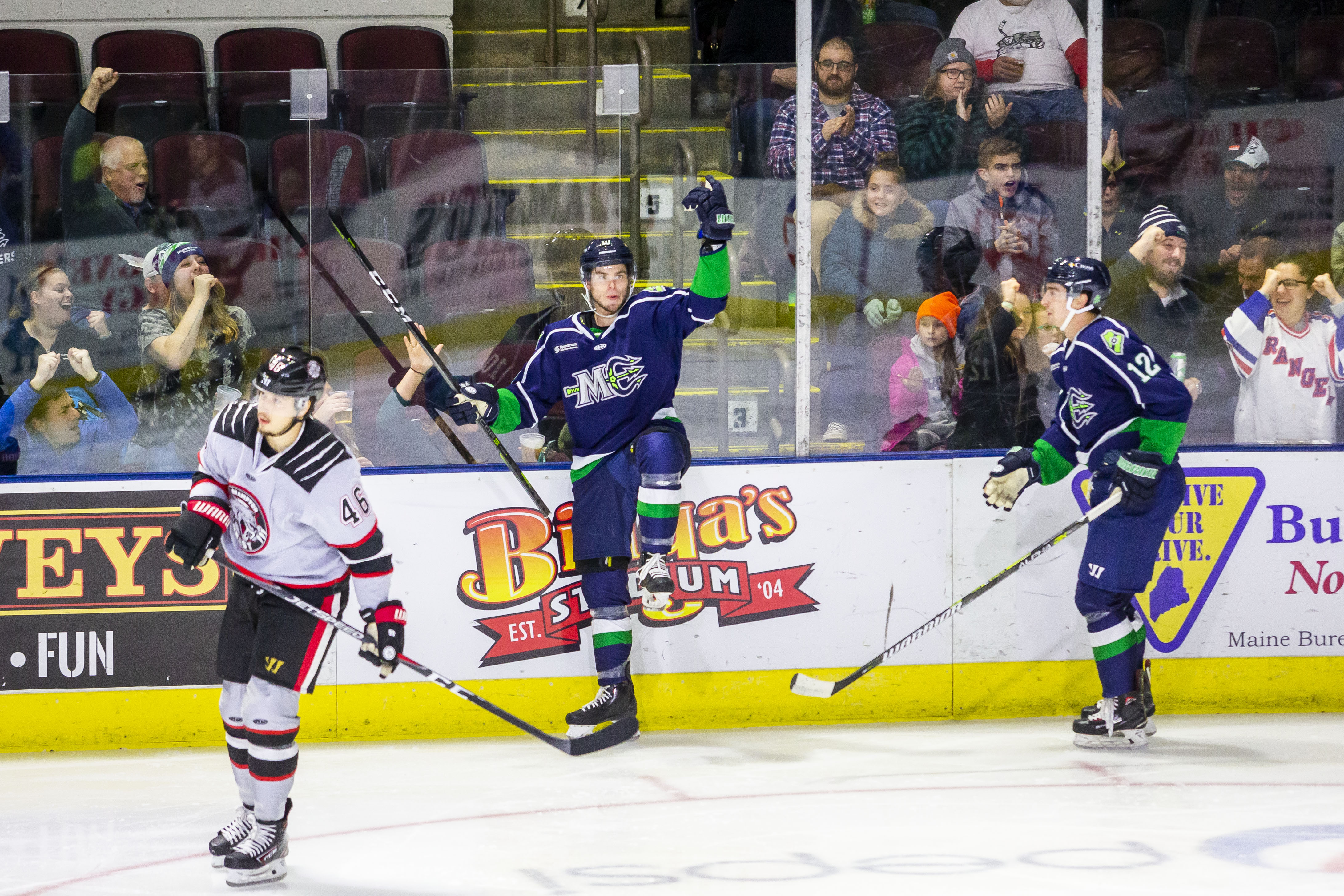 PORTLAND, ME – November 15, 2019 – In a game that featured wild momentum swings, the Mariners topped the Brampton Beast 6-3 on Friday night at the Cross Insurance Arena. It was Maine’s fourth win in a row and their fifth in six on the homestand. A crowd of over 4,000 helped celebrate Wes McCauley Appreciation Night.

The Mariners were on the right side of the scoring in first period, playing a dominant open 20 minutes. At the 7:29 mark, Ryan Ferrill scored his first goal of the season to make it 1-0. Jonathan Racine collected the puck from Ryan Gropp and took a shot that was stopped by Brampton netminder, Joey Daccord, but Ferrill buried the rebound to get the Mariners on the board first. Just 35 seconds later, Terrence Wallin scored his team-leading eighth goal of the season. Wallin crashed towards the net on a 2 on 1 and attempted to feed Taylor Cammarata, but the puck slid home off a Brampton defender. It was Wallin’s fifth straight game with a goal. The score remained 2-0 after the first period, with the Mariners pelting 18 shots on Daccord to Brampton’s six against Maine’s Tom McCollum.

The Mariners added another goal 3:26 into the middle frame extending their lead to three. Greg Chase took the puck end to end and toe dragged the puck around Brampton defenseman, TJ Melancon, flipping the puck past the blocker of Daccord. Brampton showed life in the final five minutes of the period when Daniel Leavens found the back of the net at the 15:01 mark. Brampton’s David Pacan fed the puck to Leavens who sent a one-timer past McCollum to make it a 3-1 game. With 2:21 left in the period and the Beast on the power play, Melancon put a shot on net that popped out of McCollum’s glove and to Francois Beauchemin, who lifted it over the sprawling Mariners goaltender and cut the lead to one. Exactly one minute later, Matt Petgrave had possession in the left corner and threw it right out front to Christopher Clapperton who scored stick side to tie the game at three with just 1:21 remaining in the period. All three goals were scored in a span of 3:38 to erase the 3-0 Maine lead.

The Mariners regrouped and found themselves back in the goal column and the lead just 2:09 into the final period. Taylor Cammarata found a rushing Greg Chase who carried it into the zone on a two on one with Michael McNicholas. Chase slid the puck to McNicholas who put the Mariners back in the lead with a powerplay goal, his second of the season. Ryan Culkin followed with an insurance goal when he possessed the puck at the center red line and brought it into the right circle where he took a wrist shot that beat Daccord glove side to put the Mariners up 5-3 with 8:35 to go in the game. And to put a cherry on top, with 43 seconds to go, Michael McNicholas connected a pass to Taylor Cammarata who split the Brampton defense and found himself on a breakaway with an empty net to make it a 6-3 game.

The Mariners outshot Brampton 33-23 in the game. McCollum padded aside 20 leading the way to his fourth win of the season improving the Mariners record to 6-4-0-1 on the year. Brampton fell to 8-6-0-0 with Daccord stopping 28 shots on the evening.

The Mariners finish their seven game homestand tomorrow night with “Hockey Fights Cancer” against the Adirondack Thunder at 6:00 PM. The first 1,000 kids will receive a pennant upon entry, courtesy of Q97.9. It’s a Family Four Pack night as well – families of four can get four tickets, four food and drink vouchers, and four Mariners can koozies for as low as $80. Individual game tickets can be purchased at MarinersOfMaine.com, in person at the Trusted Choice Box Office inside the Cross Insurance Arena, or by calling the box office at 207-775-3458.