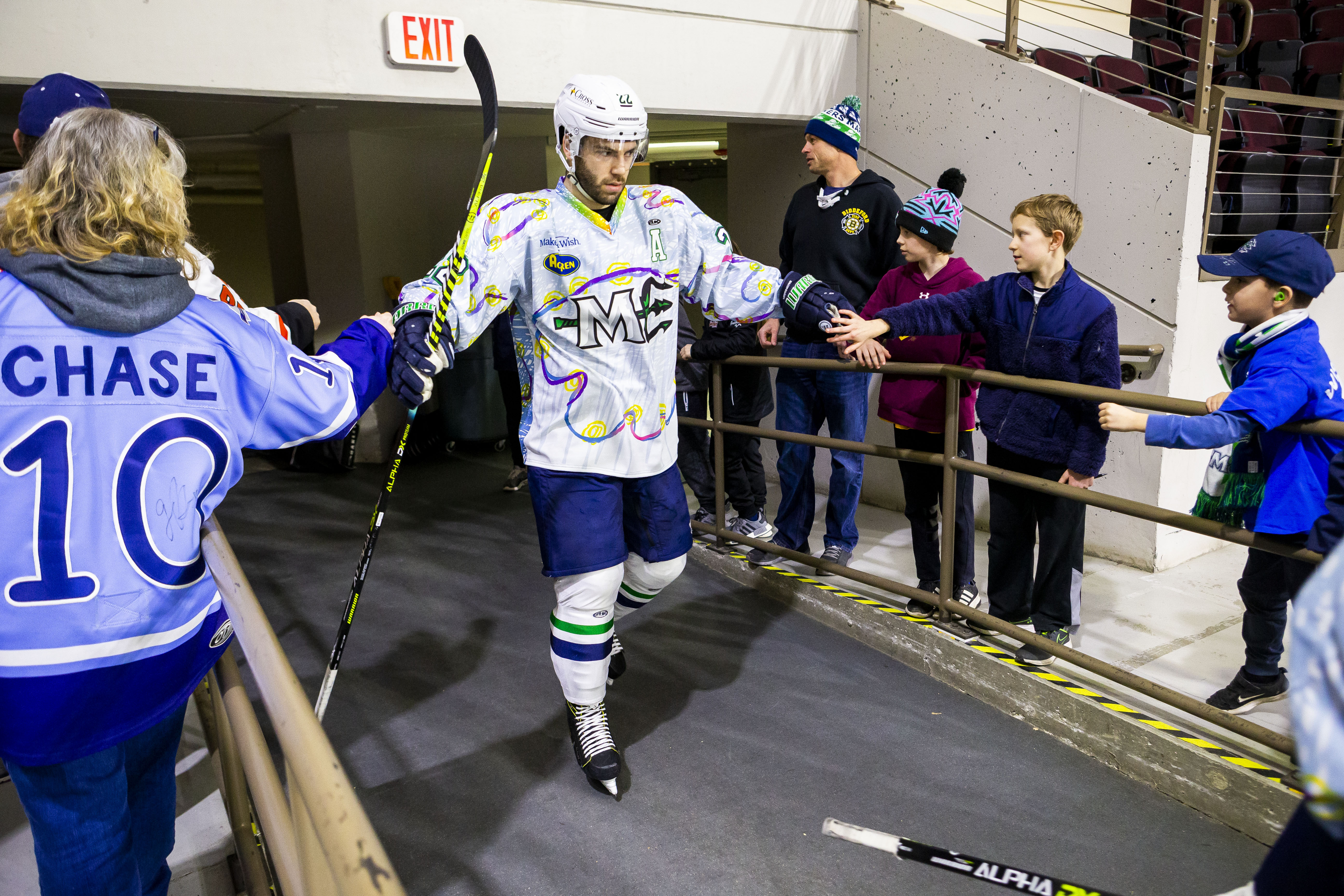 PORTLAND, ME – February 11, 2020 – The Mariners have raised $4368 for Make-A-Wish Maine through the auction of Ellie Labree’s specialty designed jerseys, that the team wore during their game on February 1st. Additional jerseys from the set will be put up for a “second chance auction,” from March 16-20 which will increase the total amount raised.

The Mariners, in partnership with Make-A-Wish Maine and Agren, held a jersey design content open to Make-A-Wish Maine “Wish Kids,” back in October, with the design of 11-year-old Ellie Labree, gaining the most fan votes among four finalists. As a result, the Mariners wore her jersey for their game on February 1st against Adirondack, a 3-2 overtime win.

“I’m glad we got to play in honor of such a good cause,” said Mariners forward Michael McNicholas, who scored the game-winning goal. “It made the win that much more meaningful. I’m proud of the boys for getting this one for Ellie.”

Ellie, a resident of Glenburn, Maine, got to drop the ceremonial puck and enjoy the game from a suite with her family. Ellie and the other three finalists (Jared Conant, Aubrey Cotta, and Libby Rulman) all 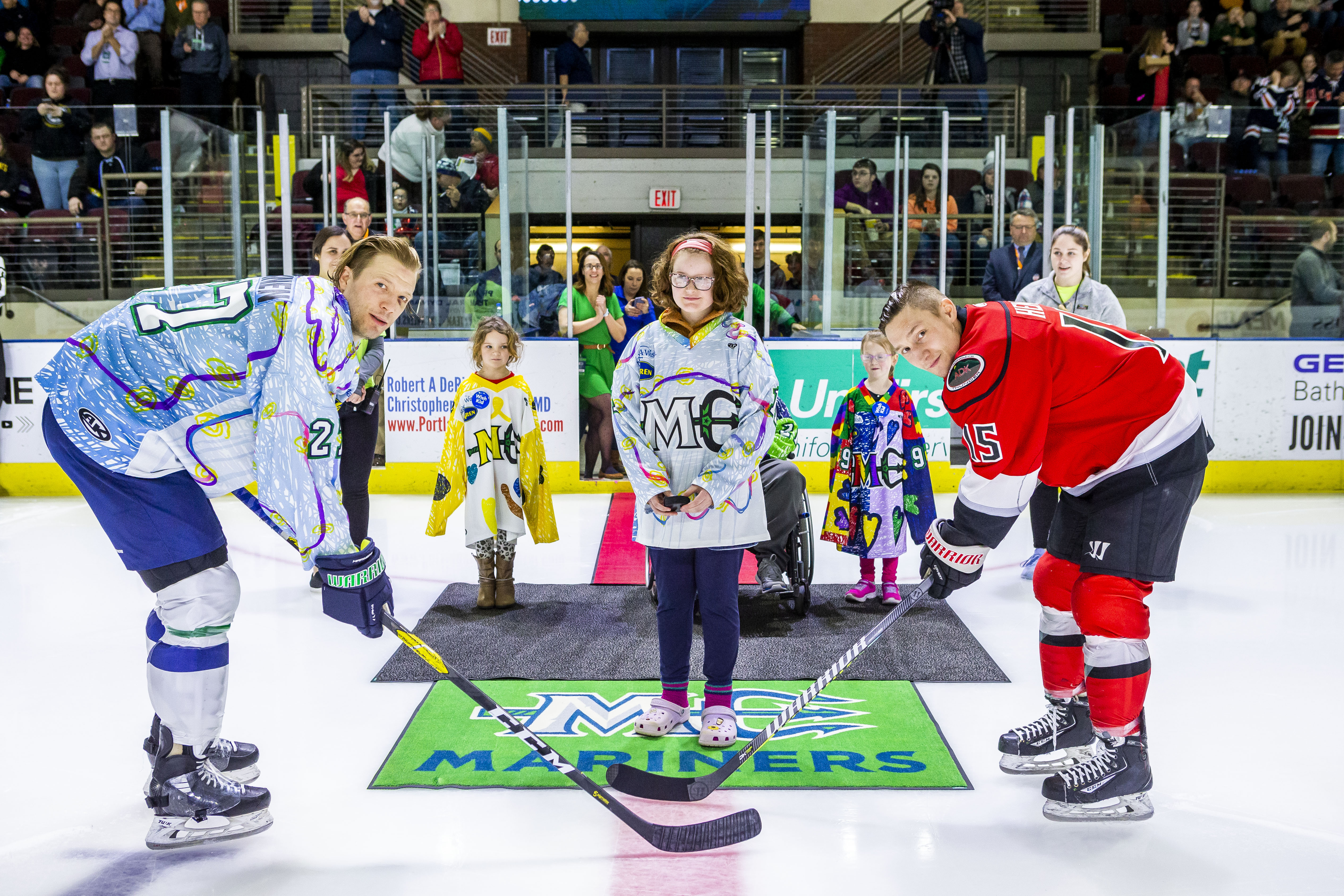 received a custom-made jersey featuring their design and their name on the back.

The team set of Ellie’s jerseys went up for bidding through Handbid starting the Monday prior to the Make-A-Wish Night game. Fans had the chance to place bids until the start of the third period on Saturday night. The donated proceeds totaled $4368.

“We’re truly blown away by the generosity of those who attended Make-A-Wish night and are so thankful for our partnership with the Maine Mariners and Agren,” said Rebekah Roy, Marketing Manager at Make-A-Wish Maine. It was a wonderful example of a true community partnership that helped to increase awareness of our mission and was an incredibly fun night for our wish kids and families.”

The Mariners will post six additional jerseys of Ellie’s design on February 16th, for fans that were unable to win the first time around. Additional proceeds will be added to the total raised for Make-A-Wish Maine.

Make-A-Wish Maine grants life-changing wishes for children with critical illnesses. On average, the organization grants one wish every five days and has impacted more than 1,500 children throughout Maine since 1992.

The Mariners are home tonight, finishing their season series with the Brampton Beast at 7 PM, before embarking on a five game road trip. The Mariners will be back home after the trip on Sunday, February 23rd for “Miracle Night,” celebrating the 40th anniversary of the Miracle on Ice. The Mariners will be wearing Team USA inspired jerseys, which will go up for auction starting January 12th on the Handbid App. There will also be a postgame screening of the Disney movie on the video board. Groups of 10 or more can get discounted tickets to all games by calling 833-GO-MAINE. Individual tickets can be purchased at MarinersOfMaine.com, at the Trusted Choice Box Office inside the Cross Insurance Arena, or by calling 207-775-3458. All Saturday and Sunday home games feature the Family Four Pack – four tickets, four food and drink vouchers, and four Mariners beverage koozies, starting at $80, and must be purchased in advance.