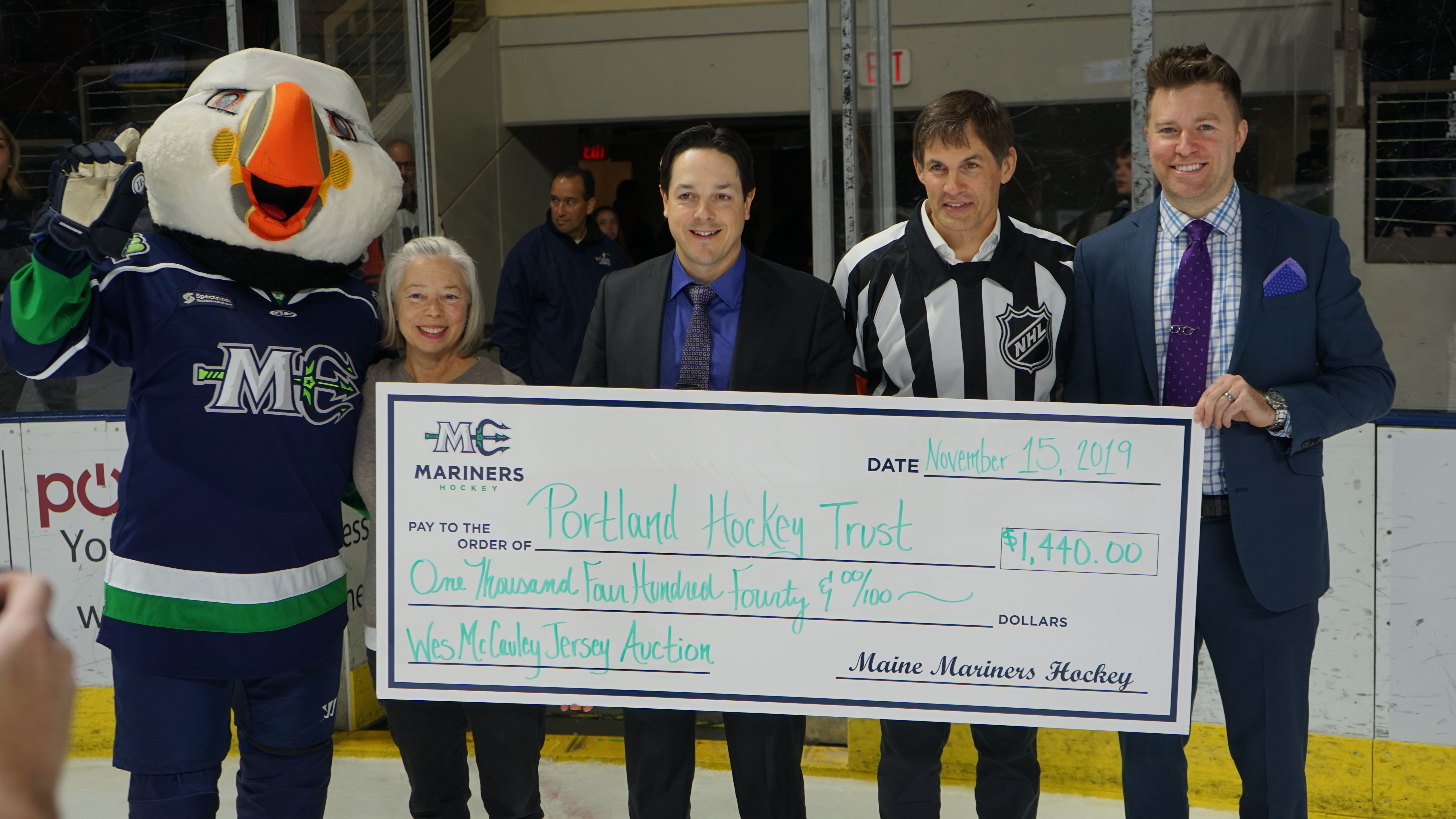 The jerseys were donated by McCauley, who wore them over the past two seasons in his role as an NHL referee. He also autographed each jersey. McCauley, who is a resident of South Portland, is regarded as the top official in the NHL, being voted as such by the NHL Players Association in 2017-18. Since 2013, McCauley has been selected to work every Stanley Cup Final series. He worked his 1,000th NHL game last season and shows no sign of slowing down. He was, however, able to make a trip to the Cross Insurance Arena last Friday night amid his busy schedule. 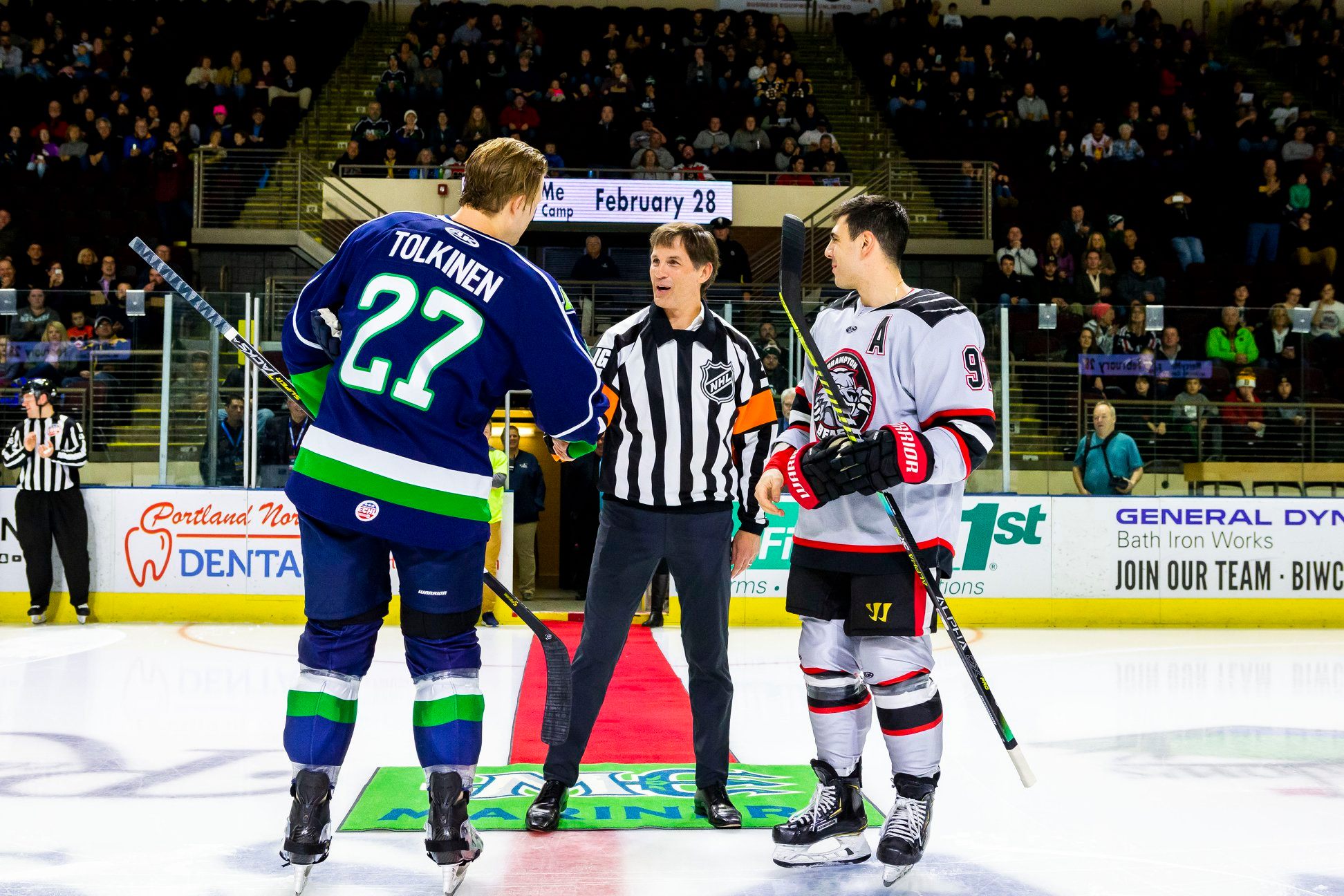 The Mariners honored McCauley on November 15th with a unique promotion: “Wes McCauley Appreciation Night.” McCauley dropped the ceremonial puck, met with fans and signed autographs, and joined Michael Keeley on the radio broadcast. He and his family watched the game from a suite as the Mariners defeated the Brampton Beast, 6-3. He helped present the check to the Portland Hockey trust after the game.

“I would like to thank the Maine Mariners for honoring me last weekend and I’m thrilled my jerseys were able to raise money for the Portland Hockey Trust,” said McCauley. “It’s a great organization that helps grow the great game of hockey in the local community. Thank you to everyone who placed a bid.”

The Portland Hockey Trust is a non-profit organization, founded in 1996. It focuses around teaching skating and hockey skills to kids from 3rd through 5th grade, at no cost – equipment included. According to their website, “the Portland Hockey Trust promotes the physical, emotional, and social well-being of youth in Portland by providing opportunities, to skate and play hockey, open to all and free of charge.”

“The Portland Hockey Trust would like to thank the Maine Mariners organization and Wes McCauley for this generous donation. The Trust is an entirely volunteer run operation that provides hockey instruction to Portland 3rd, 4th, and 5th grade boys and girls free of charge. The money will continue to provide on ice instruction, middle school hockey scholarships, and new equipment for our skaters. Thank you!”

The Mariners are in Norfolk this weekend, finishing a three game series against the South Division’s Norfolk Admirals on Friday and Saturday. They return to Portland for three games next week: Tuesday November 26th (sensory reduced game for autism awareness), Friday, November 29th (Black Friday), and Saturday, November 30th (Aquaman Night featuring Aquaman specialty jerseys). Saturday is also a “Family Four Pack” game: families of four can get four tickets, four food and drink vouchers, and four Mariners can koozies for as low as $80. Family four packs must be purchased in advance. For more information and to purchase tickets, click HERE, call 833-GO-MAINE, or visit the Mariners front office at 94 Free St. in Portland.

FOX AND CULKIN POWER MARINERS OVER ADMIRALS, 6-1
Scroll to top