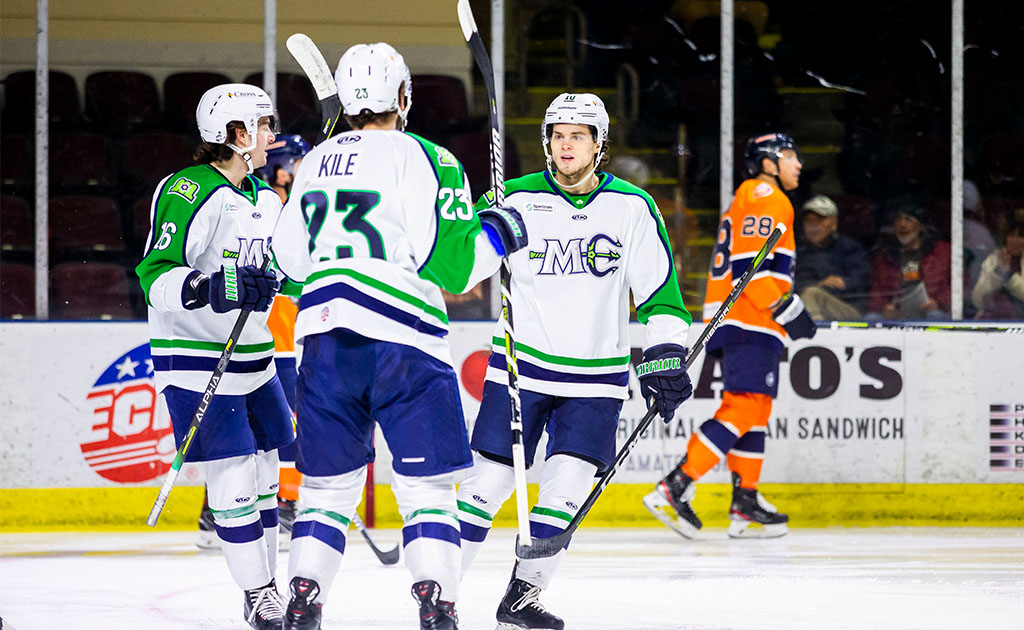 PORTLAND, ME – February 4, 2020 – Alex Kile and Greg Chase facilitated the offense, while Connor LaCouvee continued a stellar run between the pipes as the Mariners won their fourth in a row by 4-1 final over the Worcester Railers on Tuesday night at the Cross Insurance Arena. With the win, the Mariners have moved into a third place tie in the North Division playoff race.

The Mariners struck early and late in the first period to establish a 2-0 lead, which lasted through the game’s first 40 minutes. At the 3:16 mark, Michael McNicholas finished a 3-on-2 rush set up by Greg Chase and Alex Kile. McNicholas crashed the net to the right of Railers goaltender Evan Buitenhuis and tipped home a deceptive feed from Chase to open the scoring. In the final minute of the period, defenseman Marc-Olivier Crevier-Morin doubled the lead, ripping a shot under the cross bar after Kile waited at the top of the zone and handed it off to him at the left circle.

At the tail end of the 2nd period, Worcester’s Ross Olsson and Maine’s Sean Day each received seven minutes in penalties for a fight down behind Buitenhuis. Through two periods, Connor LaCouvee turned side all 22 Worcester shots to preserve the 2-0 Mariners lead.

Ryan Culkin made it 3-0 at 5:35 of the third when his backhand pass banked off of Railers defenseman Ryan MacKinnon and past Buitenhuis, Chase picking up his third assist of the game on the play. Just over a minute later, Worcester finally broke the scoreboard when Drew Callin followed Ben Thomson’s shot and ended LaCouvee’s shutout bid. That’s as close as the Railers would come, however, as Dillan Fox one-timed home an empty net goal, set up by Alex Kile at 19:55 – Kile’s third assist of the night as well.

LaCouvee made 28 saves to earn his 15th win. Buitenhuis stopped 23 of 26. The Mariners have their third four game win streak of the season and have points in nine of their last 11 games overall. The win pulled them into a third place tie with the Brampton Beast in the North Division standings.

The Mariners are home all three dates this weekend – February 7th, 8th, and 9th for the “Giving 3Kend,” sponsored by Three Dollar Deweys. Friday night at 7:15 PM vs. Worcester is “Works For ME Night,” presented by News Center Maine and a 1-2-3 Friday: $1 Aquafina water, $2 Pepsi products, and $3 Bud Light Drafts through the start of the 2nd period. Saturday at 6 PM against Brampton is Pride Night with EqualityMaine, including a sunglasses giveaway for the first 2,000 fans in attendance. On Sunday at 3 PM against Brampton once again, it’s the “Underwear Toss,” with fans encouraged to throw new packages of underwear onto the ice after the first Mariners goal to benefit Preble Street Teen Services.