After a memorable opening game this past Saturday that saw 5,291 fans come through the gate at the Cross Insurance Arena, the Maine Mariners are back home for games on Friday vs. the Reading Royals and Sunday against the Newfoundland Growlers. In between, they travel to Worcester on Saturday for their first road game of the regular season against the Railers.

This past weekend
The Mariners fell into a 3-0 hole in their season opener on Saturday but battled back with power play goals from forward Jason Salvaggio (his first professional point) and defenseman Ryan Culkin to cut the deficit to 3-2 early in the 2nd period. Adirondack regained a two goal lead soon after with a pair of quick strikes and didn’t look back on their way to a 6-3 win. Adirondack forward John Edwardh was the game’s first star with four points (2 goals, 2 assists). Alex Kile scored the third Mariners goal. A full game recap can be found HERE.

Coming up
The Mariners hold their first “1-2-3” promotion of the season on Friday (to be repeated every Friday home game): $1 hot dogs, $2 popcorn, and $3 Bud Lights through the start of the 2nd period. Game time is 7:15 PM against the Reading Royals, who are currently tied for first in the North Division, after going 1-0-1 at home against the Worcester Railers this past weekend. The first 1-2-3 night of the season also signals “Oktoberfest,” featuring beer-themed promotions and on-ice intermission activities. Up to the first 2,000 fans will receive a Mariners magnet schedule on Friday, courtesy of Portland North Dental. 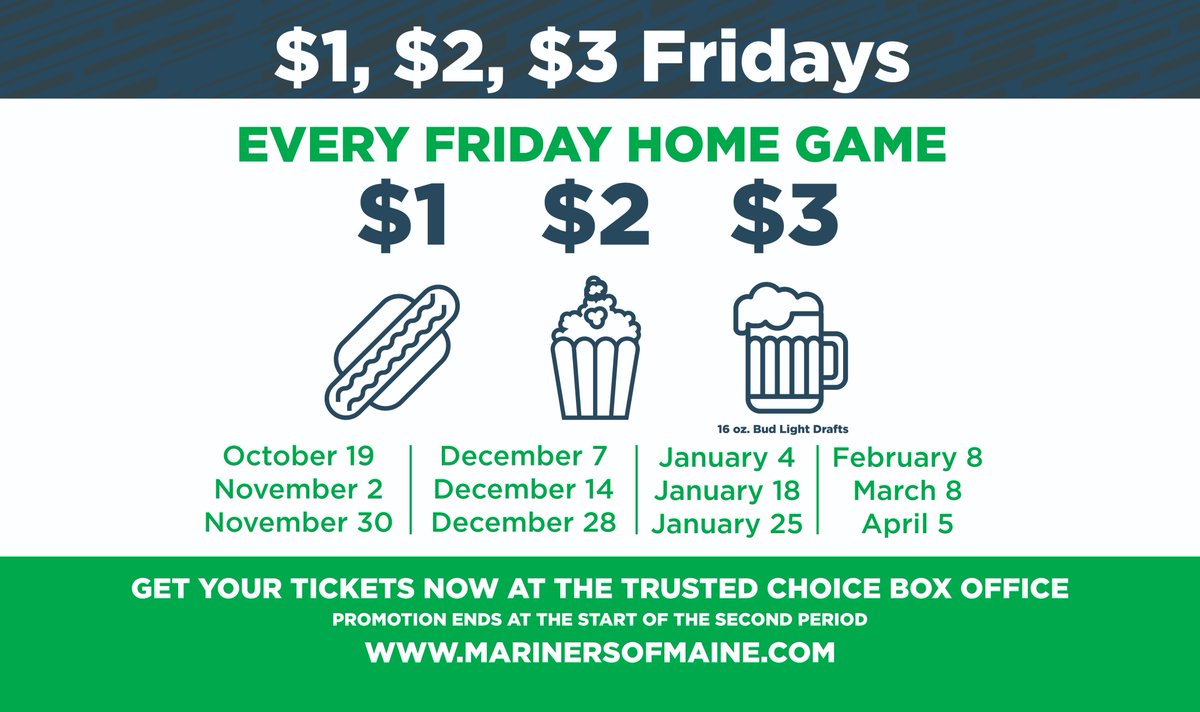 After the trip to Worcester for a 7:05 faceoff on Saturday, the Mariners welcome in the Newfoundland Growlers, their fellow first year ECHL franchise on Sunday afternoon for a 3:00 PM puck drop. It’s “Scout Night,” which will include a color guard presentation and an on-ice parade featuring area Cub Scout, Boy Scout, and Girl Scout packs and troops. Following the game is the first “skate with the team” of the season. This skate will be open to all ticketed fans and will start immediately following the end of the game. Those who wish to participate will need to check in their skates before the game at the C.N. Brown Landing located directly above the Center St. Entrance. All participants regardless of age must sign a waiver, helmets required ages 18 and under.