GLENS FALLS, NY – March 12, 2022 – The Mariners pelted Adirondack netminder Mareks Mitens with 44 shots, 34 of which came over the game’s final 40 minutes, but the Thunder held off a Mariners third period comeback attempt and escaped with a 2-1 win on Saturday night at the Cool Insuring Arena.

It looked like the first period was going to end scoreless, despite nearly 30 combined shots. However, with just 12 seconds left, Thunder defenseman Joe Masonius fooled Mariners goaltender Stefanos Lekkas was a shot from the right point to give Adirondack the lead after 20 minutes.

The Mariners upped their game with a 15-8 shot edge in the middle frame, but fell behind 2-0 at the 5:42 mark with Nick Rivera carried the puck in on a 2-on-1 and deked Lekkas to double the Thunder lead.

Moments after Mitens made a flashy glove stop to rob Nate Kallen of a goal, the Mariners finally broke through. Cam Askew drove wide and fed Liam Folkes for his first goal as a Mariner at 11:53 of the third. The Mariners came close to tying the game with Lekkas pulled, when Brendan Soucie shoved a puck from the goal line into Mitens pads, but the whistle was blown before the puck dribbled through.

The Mariners 44-shot total was their second highest output of the season. Lekkas made 28 saves in the losing effort. With the loss, the Mariners fall behind Worcester for the fourth and final North Division playoff spot. Nineteen games remain.

The Mariners (24-23-4-2) and Thunder will play again in Glens Falls tomorrow afternoon at 3 PM. The two teams will then face off on Wednesday, March 16th at 7 PM in Portland for the next Mariners home game and a St. Patrick’s Day celebration. The first 500 fans through the door will also get a Mariners scarf. Tickets for all home games can be purchased online at MarinersOfMaine.com/tickets or by visiting the Trusted Choice Box Office inside the Cross Insurance Arena. 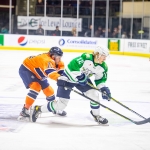 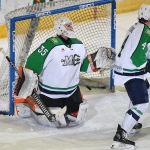