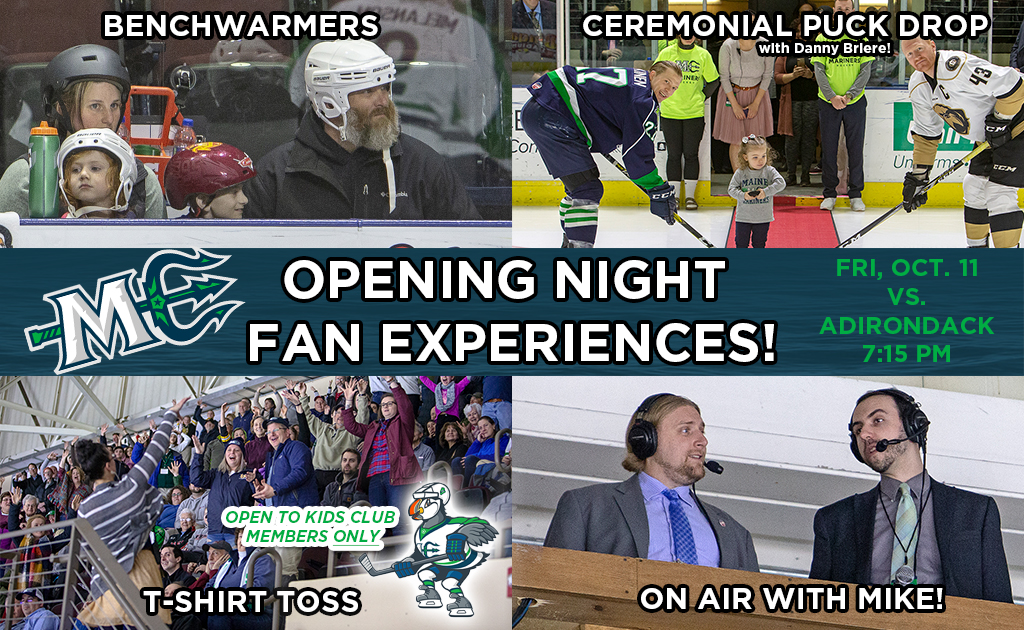 PORTLAND, ME – September 18, 2019 – To show appreciation for their fans as they enter their second ECHL season, the Maine Mariners will hold a contest for four lucky fans to win unique opening night experiences. On October 11th, when the Mariners host the Adirondack Thunder to open the 2019-20 season, fans will get the chance to drop the puck with Daniel Briere, watch warmups from the bench, join the broadcast, and assist with T-Shirt Toss (Beacon’s Kids Club members only).

“We pride ourselves on making Mariners games a memory-creating experience,” said Adam Goldberg, Mariners Vice President of Business Operations. “Giving fans the opportunity to participate in our game activities is just as exciting for us as it is the fans. We have the privilege of witnessing fans create lifelong memories and we can’t wait to start the season on October 11th.”

Daniel Briere is the Mariners Vice President of Operations and a two-time NHL All-Star, who played 17 seasons with the Coyotes, Sabres, Flyers, Canadiens, and Avalanche. As Briere enters his second season in charge of the Mariners, one lucky fan will join him in the ceremonial puck drop to kick off season two.

The Mariners “Benchwarmers” experience entails watching warmups live from the player’s bench. One lucky fan, with up to three guests, will get to feel the energy of opening night from ice level. Benchwarmers experiences are also available throughout the season to those who purchase group tickets, based on availability.

The third experience open to all fans is a chance to join Mariners play-by-play announcer Michael Keeley on one of the intermission reports. Keeley enters his second season as Mariners’ Media Relations and Broadcast Manager, and calls every home and away game over the internet on Mixlr and ECHL.tv.

Exclusively for members of Beacon’s Kids Club, one kid will win the chance to help throw out t-shirts to pump up the crowd during “T-Shirt Toss.” Beacon’s Kids Club is always accepting new members and is open to children ages 2-12. Benefits include an exclusive Mariners poster, two kids tickets to any Mariners game, an exclusive Kids Club only autograph session, plus extra incentives for attending five or more games.

Fans will be able to register to win starting Monday, September 23rd on MarinersOfMaine.com. No purchase is necessary, and fans can choose which experiences they wish to enter for. Winners will be selected and contacted on October 1st.