GLENS FALLS, NY – February 25, 2022 – Cam Askew led a group of six Mariners skaters with multi-point games as the Maine Mariners blasted the Adirondack Thunder 7-1 on Friday night at the Cool Insuring Arena. The Mariners have started their road trip outscoring opponents 13-2, as they won their third straight overall.

The Mariners jumped up early for the second game in a row. At 2:15 of the opening period, Keltie Jeri-Leon and Nate Kallen set up Zach Malatesta in the slow for his 6th goal of the season, 4th as a Mariner, and 2nd in as many games on the road trip. Maine dominated the opening stanza, outshooting the Thunder, 13-9.

In the middle frame, the Mariners added three more to stretch their lead to 4-0. Tyler Hinam started it early, roofing a shot from the left circle at 4:59. Less than three minutes later, Nate Kallen and Pat Shea worked a give-and-go, with Shea finding Kallen from below the goal line for a short-side shot that snuck through Thunder netminder Brandon Kasel. In the final minute of the period, Cam Askew made it 4-0 when he scored a power play goal for the fourth game in a row, camped on the doorstep, cleaning up a shot from Mathew Santos.

In the first minute of the third, Adirondack broke through Jeremy Brodeur when Sebastian Vidmar beat the Mariners netminder high stick side just 43 seconds into the final period. Any possible Adirondack momentum was quickly wiped away at 3:07 when Conner Bleackley made an impressive backdoor pass to Jake Bricknell, who tapped in his 3rd goal of the season making it 5-1. At 6:48, Bleackley joined the goal party himself when Askew set him up from behind the Thunder net. Liam Folkes notched his first Mariners point with the secondary assist. At 14:56, Askew added one more for good measure, stealing a pass in the neutral zone and driving wide for an unassisted goal against Alex Sakellaropoulos, who entered the Thunder net in relief to start the third period.

Jeremy Brodeur made 24 stops to earn his 15th win. After setting a new season best margin of victory on Wednesday (6-1 win at Trois-Rivieres), the Mariners immediately topped it with tonight’s six-goal win.

The Mariners (22-20-4-2) and Thunder meet again in Glens Falls on Saturday night at 7 PM. The Mariners Broadcast Network will carry the game on FloHockey and Mixlr, with pregame coverage beginning at 6:45. The Mariners will visit Worcester next weekend for a pair of games against the Railers on Saturday, March 5th and Sunday the 6th. The next home game is Wednesday, March 9th against the Railers at 7 PM, “Reading Night.” Tickets for all home games can be purchased online at MarinersOfMaine.com/tickets or by visiting the Trusted Choice Box Office inside the Cross Insurance Arena. 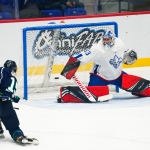 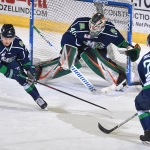