Oct. 22, 2018 – With a thrilling third period comeback effort on Sunday afternoon at the Cross Insurance Arena, the Maine Mariners picked up their first win in franchise history. The victory capped off three games in three days for the Mariners who don’t get much of a rest this week, playing three more in a four day span from Wednesday through Saturday.

This past weekend
Fri, Oct. 19th – REA: 6, MNE: 4
The weekend got off to a good start when the Mariners built a 2-0 lead on home ice against the Reading Royals thanks to a first period goal by Terrence Wallin and early second period power play tally by Alex Kile. Holding a 2-1 advantage late in the second, Morgan Adams-Moisan was assessed a double minor penalty, leading to Nick Luukko’s game-tying goal. Reading scored two more in the final minutes of the period to go up 4-2, and built the lead to 5-2 just 30 seconds into the third. The Mariners mounted a comeback when Derek Pratt and Garrett Cecere each scored their first professional goals, but a long empty-net goal by Michael Huntebrinker sealed their fate. FULL GAME RECAP

Sat, Oct. 20th – MNE: 1, WOR: 4
In what was the home opener for the Worcester Railers, a highlight reel goal by Railers forward Tyler Barnes opened the scoring late in the first period. Despite a 15-11 shot advantage in the second period, the Mariners fell down 3-0 on Worcester goals by Mike Cornell and Jeff Kubiak. Starting goaltender Brandon Halverson was lifted in favor of Connor LaCouvee in the third period, and he stopped 10 of 11 shots, but a Riley Bourbonnais goal to briefly make the game interesting early in the frame was all the Mariners could muster. FULL GAME RECAP

Sun, Oct. 21st – NFL: 2, MNE: 4
In the inaugural meeting of the ECHL’s two newest teams, Drew Melanson’s breakaway goal gave the Mariners a 1-0 lead after one. The Growlers dominated the second period, outshooting the Mariners 13-4 and getting a pair of quick goals from Ryan Moore and Marcus Power (PPG). With less than eight minutes left in the third, Dawson Leedahl tied the game on the power play and on the very next shift, Alex Kile broke loose and slipped a puck between the pads of the Growler goaltender (Michael Garteig) to give Maine two goals in 17 seconds, and a 3-2 lead. Kile tossed in the empty netter to give him a total of four goals in three Mariners home games. Connor LaCouvee got the win his first pro start, stopped 32 of 34 shots. FULL GAME RECAP

Coming up
The Mariners remain home on Wednesday night for their first meeting with the Manchester Monarchs at 7:00 PM. The Mariners have partnered with Two Men and Truck and their Movers for Military program, collecting donations for veterans living at local shelters. Essential items such as socks (new), underwear (new), towels (new or gently used), gloves/mittens, hooded sweat shirts, jeans and rugged pants, and heavy winter coats are in need along with razors, deodorant, soap, shampoo, dental products, and backpacks. Donation boxes will be located outside of security as well as at the stick taps table on the concourse. Fans can also bring donations to the Mariners office (located next to the Arena at 94 Free St.) leading up to the game. Doors will open at 6:00 PM for the game, 5:45 for season ticket holders. Individual tickets can be purchased HERE or at the Trusted Choice Box Office inside the arena. (207- 775-3458)

The Mariners will spend the weekend on the road in Glens Falls, NY (Adirondack) and Manchester, NH. It’s a 7:00 faceoff at Adirondack Friday and a 6:00 puck drop on Saturday night in New Hampshire. After Saturday’s game, the Mariners will have six days off before beginning the November schedule at home against Reading on Friday, November 2nd. The Mariners Broadcast Network will carry all games on MarinersOfMaine.com/listen and ECHL.tv, with pregame coverage beginning 15 minutes prior to opening faceoff. 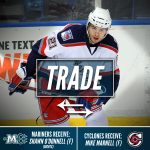