WORCESTER, MA – April 6, 2022 – The Worcester Railers rallied from a 3-2 third period deficit to top the Mariners 4-3 on Wednesday night at DCU Center in the final meeting of the season series. With the win, the Railers captured the first ever “VIP Rivalry Cup.”

Reid Stefanson, who scored his first professional goal on Sunday, got the Mariners on the board early, cleaning up a rebound produced by a Cam Askew slapshot at 3:42. Askew collected another point at 12:11 with a goal of his own, a shot from the left wall that caught Railers goaltender Ken Appleby off guard. Just 41 seconds later, the Railers broke through when Reece Newkirk found a loose puck and shoveled it behind Callum Booth. The Mariners took their 2-1 lead into the 2nd period.

The teams traded goals in the middle frame. Conner Bleackley put Maine back up by two when his drive down the left wing finished with a wrister past Appleby’s glove at 7:11 of the second. Railers defenseman Austin Osmanski cut the deficit back to one just under three minutes later with a one-timer from the blue line. Callum Booth took contact from Anthony Repaci in front but the goal was confirmed upon review. The period also featured a fight between Maine’s Zach Malatesta and Worcester’s Steve Jandric, following a big check by Malatesta on Newkirk.

It didn’t take the Railers long to tie it up in the 3rd as Jacob Hayhurst beat Callum Booth’s glove side on a 2-on-1 just 1:39 into the final frame, capitalizing on a Mariners turnover just outside their blue line. The Railers then took their first lead of the game at 6:08 when Anthony Repaci made an impressive feed from behind the net to Brent Beaudoin right in front of Booth, who had no time to react. Stefanos Lekkas relieved Booth following the goal. The Mariners could not muster the tying goal.

Maine outshot Worcester 35-29, as Appleby stopped 32 to earn the win. Booth stopped 17 of 21 while Lekkas went 8 for 8. Worcester took 8 of 14 meetings on the season to claim the VIP Rivalry Cup.

The Mariners (30-29-4-3) continue on the road, visiting Reading for three games this weekend at Santander Arena. They return home to finish the regular season with a three-game homestand kicking off April 13th, which is a sensory-reduced game for “Autism Acceptance Night” at 7 PM, also against Reading. Tickets for all home games can be purchased online at MarinersOfMaine.com/tickets or by visiting the Trusted Choice Box Office inside the Cross Insurance Arena. 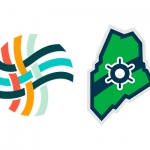 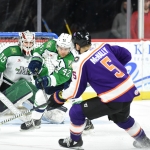