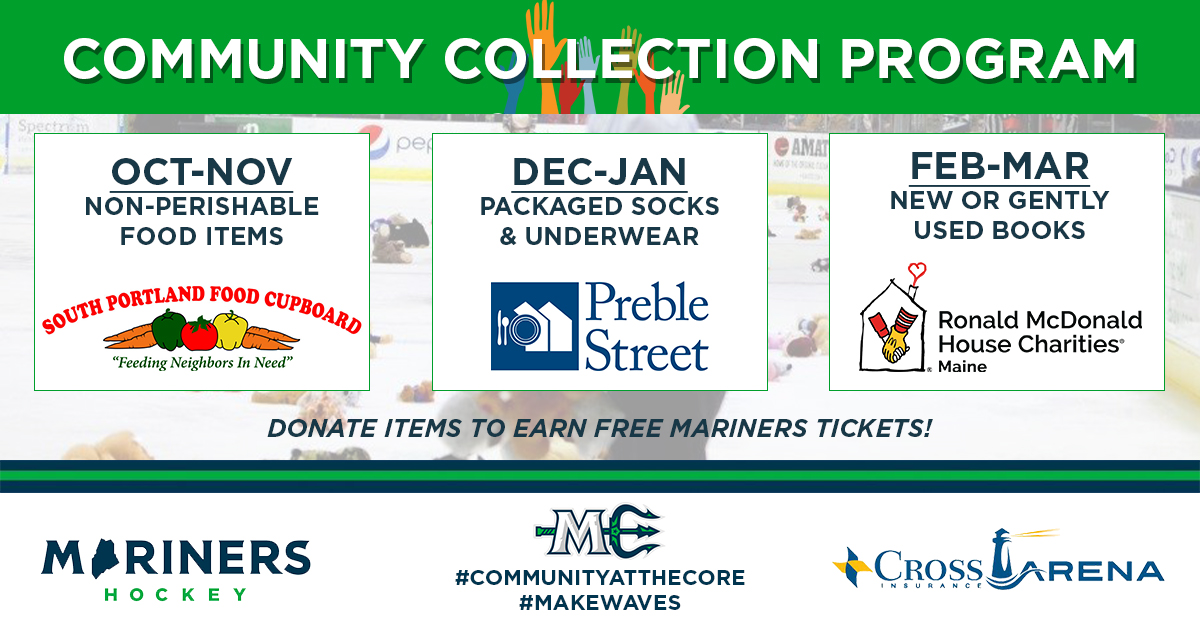 PORTLAND, ME – September 17, 2019 – The Mariners, in conjunction with the Cross Insurance Arena, are launching the “Community Collection Program” for the 2019-20 season, asking fans to donate items to various local charitable causes during Mariners homes games and other Cross Insurance Arena events. The Community Collection Program will feature three different categories of items based on the spirit of each season. At all Mariners games, in exchange for donating a select amount of items for each collection period, fans can receive a free ticket to a regular season weekday game.

“Mariners games are far from just hockey,” said Adam Goldberg, Mariners Vice President of Business Operations. “Our season is 36 opportunities for friends, neighbors, colleagues and family to come together and enjoy a night out. Some of our neighbors need help and our games are a great chance to raise awareness and collect goods. We have partnered with some great organizations this season to make a positive impact on fellow Mainers.”

“We are so grateful that the Maine Mariners are partnering with us in the fight against hunger,” said Dwayne Hopkins, Executive Director at the South Portland Food Cupboard. “The goal of any team is to win. Right now one in four children in Cumberland County are losing to Hunger. We thank the Mariners for being a part of the team that is ‘Feeding Neighbors in Need.’”

December 7th will mark the 2nd annual Teddy Bear Toss, with stuffed animal collection to benefit local fire departments. Fire rescue crews keep stuffed animals on hand for comforting children at the scene of a fire. Fans are encouraged to toss stuffed animals onto the ice following the Mariners’ first goal of the game.

In the months of December and January, the Mariners are looking for new packages of socks and underwear to benefit the Preble Street Teen Shelter. Fans who bring two packages of either socks or underwear will receive a ticket to a future 2019-20 weekday game. The Mariners’ February 8th game against the Brampton Beast at 6:00 PM will also feature the “Underwear Toss,” where all fans are encouraged to toss packages of new underwear onto the ice after the first Maine goal. All underwear will also be donated to Preble Street Teen Center.

For the final two regular season months of February and March, the Community Collection item will be new or gently used books, benefitting the Ronald McDonald House. A donation of three books will earn fans a ticket to a future 2019-20 weekday game or a 2020-21 game, starting with donations made on March 14th. March is National Reading Month, and the Mariners are holding “Reading Night” during their game on Sunday, March 1st against the South Carolina Stingrays. The Mariners’ inaugural “Read with ME” summer reading program gathered more than 500 registrations.

In addition to Mariners games, all other Cross Insurance Arena events during the Mariners season will accept donations in correspondence with each collection period.

“We are excited to grow this community initiative beyond the 36 Mariners home games and what better way to start it off than with two nights at the PBR on September 27 & 28,” said Melanie Henkes, General Manager of the Cross Insurance Arena.

In order to earn Mariners weekday tickets, items must be donated at Mariners games. A collection table will be located inside the main gates at the “Promotions Port” area.

The second season of Maine Mariners ECHL hockey kicks off October 11th at home when the Adirondack Thunder visit the Cross Insurance Arena for a 7:15 PM faceoff. Tickets to all 36 home games are available HERE. Full and half season plans along with 12-game mini plans, flex packs and group tickets are also available. For more information, go to MarinersOfMaine.com, call 833-GO-MAINE visit the Mariners front office at 94 Free St. in Portland. 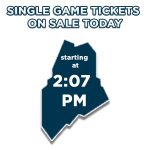 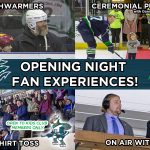