WORCESTER, MA – January 12, 2022 – Trailing 3-0 late into the third period, the Mariners power play – their bread and butter all season long – nearly led them to a miraculous comeback. Goals by Cam Askew and Pascal Laberge 27 seconds apart made things interesting, but the Worcester Railers held on for a 4-2 win on Wednesday Night at the DCU Center.

The only goal of the opening period came at the 5:00 mark from Worcester’s Brett Beaudoin. Linemate Nolan Vesey whipped a shot off the pad of Mariners netminder Callum Booth and right to Beaudoin for a 1-0 Worcester lead. After a slow start, the Mariners were strong in the second half of the period, and ended up outshooting the Railers 14-12 in the first.

Despite another strong period, the Mariners were again outscored by a goal in the middle frame. Railers defenseman Will Cullen got the period’s only goal when he backhanded home a loose puck off a scramble in front of Booth at 14:20. The Mariners again outshot Worcester, this time by a margin of 15-11.

The Railers went up by three at 5:31 of the third when Anthony Repaci one-timed home a feed from Cole Coskey, which would appear to be the dagger. The Mariners, however, used their power play to claw back. At 12:54, Cam Askew sat on the doorstep of the crease, grabbed a rebound from a Zach Malatesta shot, and quickly pulled the puck from backhand to forehand and slid it past Appleby to put the Mariners on the board. Immediately, the Railers took another penalty and Pascal Laberge came out from the right wing circle and slipped a shot between Appleby’s pads to instantly make it a 3-2 game. Malatesta received another assist, giving him seven in five games since joining the Mariners. Maine would have one last opportunity with 1:53 left when the Railers were called for too many men on the ice, but Worcester’s Nolan Vesey hit a long empty netter with 14 seconds remaining to seal the game.

Appleby made 37 saves to earn the win on the same day he was named to the ECHL All-Star team.

The Mariners (13-13-3-1), will have a rare weekend off, returning to play on Friday, January 21st at home against the Orlando Solar Bears at 7:15 PM. It’s Women in Sports night, featuring a pre-game panel, highlighted by former U.S. Olympian and current President of the Boston Pride, Colleen Coyne. It’s also a 1-2-3 Friday: $1 popcorn, $2 hot dogs, and $3 Bud Light Drafts through the start of the 2nd period. The game is presented by Kit NA Brewing. The Mariners have back-to-back “3Kends” to finish January, hosting games on the final two Fridays, Saturdays, and Sundays of January. Individual tickets for all games can be purchased online at MarinersOfMaine.com/tickets or by visiting the Trusted Choice Box Office inside the Cross Insurance Arena. 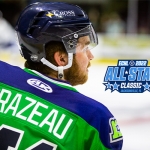 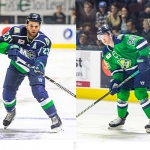