PORTLAND, ME – April 13, 2022 – Five Mariners registered multi-point games while Callum Booth stopped 37 shots in a 6-2 Mariners victory over the Reading Royals on Wednesday night at the Cross Insurance Arena. The Mariners kept pace with the Worcester Railers in the race for the fourth and final playoff spot in the North Division.

In an action-packed opening period, the Mariners got on the board first at 3:55. Pascal Laberge got in alone and deked around the pad of Royals goaltender Hayden Hawkey for the 1-0 Maine lead. Reading defenseman Dominic Cormier tied the game at one with a shot from the blue line at 7:27, but the Mariners quickly responded. Laberge made a toe drag in the neutral zone and sent Nick Master in on the left side, who beat Hawkey under the crossbar. The opening period was also very physical, highlighted by an explosive hit by Michael Kim on Reading’s Brennan Saulnier.

Despite the Royals winning the 2nd period shot battle 15-3, the Mariners scored the only goal of the frame. At 8:19, Cam Askew took a feed from Reid Stefanson and darted down the shot, ripping a shot past Hawkey. The middle stanza was defined by penalties, with the Royals getting four power plays to Maine’s three. Callum Booth had a standout period in the Mariners net, making 15 stops.

Trailing 3-1 in the third, Reading cut the deficit back to one just 2:28 in when Trevor Gooch scored on a breakaway, outmuscling Mariners defenseman Gabriel Chicoine to break free. The Mariners then took consecutive penalties to give Reading a two-man advantage, but as they killed off the first, Mathew Santos got a breakaway of his own out of the box and beat Hawkey’s glove to put Maine back up by two at 5:44. Askew got his second of the night at 10:31 with a power move to the net and Tyler Hinam added an empty netter in the final minute to bring the game to a 6-2 final.

Booth stopped 37 of 39 for his eighth win of the season. Hawkey made 20 stops on 25 shots in the loss. With Worcester’s 3-0 win at Trois-Rivieres, the Mariners remain .007 percentage points behind the Railers for fourth place. The Lions failed to clinch a playoff spot due to their loss. Maine will still need to finish with either two more points than Worcester or two wins plus two regulation losses by the Lions to make the playoffs.

The Mariners (31-31-5-3) host the Newfoundland Growlers on Friday and Saturday night to close out the regular season. It’s Fan Appreciation Weekend, presented by Three Rivers Whitewater Rafting and Chick-Fil-A. Friday’s game begins at 7:15 PM and is a 1-2-3 Friday: $1 popcorn, $2 hot dogs, and $3 Bud Light Drafts through the start of the 2nd period. Boston Bruins anthem singer Todd Angilly will also be returning to perform the Star Spangled Banner. Saturday’s game, the regular season finale, begins at 6 PM. Tickets for all home games can be purchased online at MarinersOfMaine.com/tickets or by visiting the Trusted Choice Box Office inside the Cross Insurance Arena. 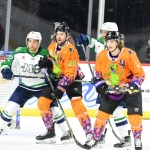 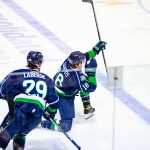