PORTLAND, ME – March 1, 2019 – The Maine Mariners will host “Mighty Ducks Night” on Sunday, March 31st at the Cross Insurance Arena as they host the Adirondack Thunder at 3:00 PM.

Following the game, the Mariners will screen D2: The Mighty Ducks (1994) on the center-ice jumbotron. All fans with tickets to the game are invited to stick around for the screening. Limited concessions will remain open through the beginning of the movie.

Julie “The Cat” Gaffney, a pivotal character in the Mighty Ducks series, who first appears in D2: The Mighty Ducks, is written as a native of Bangor, Maine. Gaffney, who is portrayed by Colombe Jacobsen-Derstine is even seen wearing a “Bangor” hockey jersey in the film.

The Mighty Ducks trilogy, which spanned from 1992-1996, is one of the most successful hockey film franchises of all-time. Starring Emilio Estevez as head coach Gordon Bombay, who brings a youth hockey program out of the doldrums, the timeless story even had a hand in the creation of an NHL team – the Mighty Ducks of Anaheim (now, the Anaheim Ducks).

March 31st is also “Youth Hockey Day,” as the Mariners celebrate the wide participation of kids in hockey programs throughout the state of Maine. Ticket discounts for youth teams or groups of any kind in numbers of ten or more can be obtained by calling 833-GO-MAINE. Single game tickets are available HERE or by calling the Trusted Choice Box Office at 207-775-3458. 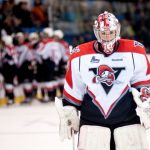