PORTLAND, ME – December 9, 2018 – The Mariners built a 3-0 lead through 40 minutes on Sunday afternoon over the Worcester Railers and held on for a 4-2 win despite a third period that the was dominated by the visitors. Brandon Halverson continued his strong play, stopping 40 shots and even adding an assist. Maine improved to 8-3-0-1 at the Cross Insurance Arena with their second home victory of the weekend.

Just like the last Maine meeting between the two teams on November 30th, a fight ensued in the opening seconds of the game. Alex Adams took on Yanick Tucotte just 25 seconds in, after Morgan Adams-Moisan had challenged Turcotte ten seconds into the game nine days prior. Alex Vanier was assessed a double-minor penalty for slashing and cross-checking at 9:59 and the Mariners capitalized on the second half of the power play when Ryan Ferrill punched home a rebound from a Michael McNicholas shot in the slot. The Mariners would improve to 7-1-0-1 when McNicholas registers a point. Jason Salvaggio got a secondary helper and the Mariners outshot Worcester 11-9 in the first.

The second period was Halverson’s best as he stopped all 15 Railers shots. At 12:15, Ryan Gropp doubled the lead, backhanding home his second goal of the weekend. Ferrill won an offensive zone faceoff back to Garrett Cecere at the blue line and Cecere’s blast was kicked by Railer netminder Evan Buitenhuis right to Gropp, who finished it off. Moments after a key save by Halverson on Ivan Kosorenkov, Justin Breton snapped a shot through the pads of Buitenhuis to make it 3-0 Maine. Sean Day and Luke Stork provided the assists on Breton’s second goal in as many games.

Worcester’s Nick Sorkin finally broke through Halverson at 5:01 of the third, dashing down the slot and scoring his second goal of the season. 1:52 later, he struck again, finishing an impressive setup by Matty Gaudreau from below the goal line. The Railers played almost the entire remainder of the third in the Maine zone, but Halverson held strong and at 18:50, with the Worcester net empty, he kicked a shot to Morgan Adams-Moisan, who launched his fifth goal of the season all the way down into the vacated cage. Worcester pulled their netminder again and elevated their shot total to 42, but Halverson shut the door for his eighth win of the season. In the loss, Buitenhuis stopped 23 of 26.

The Mariners will travel to Canada for a two game set in Newfoundland against the first place Growlers on Tuesday and Wednesday. Both games begin at 5:30 ET with coverage beginning at 5:15 on the Mariners Broadcast Network (ECHL.TV and Mixlr). Maine is home on Friday against the Adriondack Thunder at 7:15 PM. It’s a 1-2-3 Friday: $1 hot dogs, $2 popcorn, and $3 Bud Lights through the start of the 2nd period. It’s also the final day of the non-perishable food drive for Preble Street. Tickets can be purchased at MarinersOfMaine.com or by calling 207-775-3458.

Followon TwitterSubscribeto RSS Feed
IN BACK AND FORTH AFFAIR, MARINERS TOP THUNDER IN SHOOTOUT 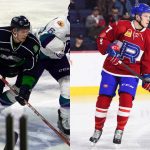