PORTLAND, ME – March 26, 2022 – Mathew Santos led an offensive explosion with five points in his return from injury, as the Maine Mariners – masquerading as the “Wild Blueberries” for the night, hung nine goals on the Newfoundland Growlers in a 9-4 victory. Nearly 4,000 fans turned out to witness the big win on Saturday night at the Cross Insurance Arena.

The Mariners, sporting Maine Wild Blueberries jerseys for the first time since March of 2019, put a five-spot on the board in the opening period. As he did on Friday night, Alex Kile opened the scoring early, collecting a Nick Master feed off the pad off Growler goaltender Hayden Lavigne and making it 1-0 Maine at 2:59. It didn’t take the Growlers long to respond when Newfoundland defenseman Matt Hellickson beat Callum Booth 50 seconds later to tie it up. The Friday night déjà vu continued when Mariners defenseman Zach Malatesta ripped a shot off the post and behind Lavigne at 5:43 of the period to put the Maine back in front. With the Mariners on the power play at 13:54, Kile got his second goal of the contest with a one-timer from the right circle, spelling the end of the night for Lavigne, who was replaced in goal by Angus Redmond. The Mariners special teams struck again at 16:35, when Keltie Jeri-Leon scored an impressive coast-to-coast shorthanded goal, breaking in on Redmond and backhanding it over the sprawling netminder. On the same power play, the Growlers got one back when Tyler Boland deked around Booth and tucked in Newfoundland’s second goal at 17:46, completing a seven-goal opening frame.

The high-scoring affair continued early in the second when the Mariners’ Nate Kallen and Growlers’ Todd Skirving traded goals at 1:45 and 2:40 respectively. Although that was it for the scoring in the middle-frame, both teams continued to have chances, with a 14-13 Newfoundland shot advantage in the period. The Mariners had to go to their backup goaltender as well with Stefanos Lekkas relieving Booth of an apparent injury midway through the 2nd and stopping all 10 shots that came his way. The Mariners led 6-3 after 40 minutes.

Lekkas continued to shine throughout the third, and ended up stopping 30 of 31 for the game. The only goal he allowed came to Pavel Gogolev at 6:42 of the third, which brought the Growlers back within two, at 6-4. Mathew Santos, playing his first game since March 5th, then scored back-to-back goals at 8:59 and 9:51 to help the Mariners pull away. The first goal came after Kallen forced a puck down the right boards and slid it across the crease during a 4-on-4 sequence. Then, off a broken zone entry during the ensuing power play, Kile found Santos at the bottom of the right circle for a wrister over a sprawling Redmond. Santos finished his five-point game when he helped set up Jeri-Leon for his second goal at 16:09 to give the Mariners nine on a night – tying their season high, first set on December 29th vs. Worcester.

A total of nine Mariners finished with multi-point games, led by Santos with three goals and two assists. Kile had four points (two goals two assists), while Jeri-Leon (two goals, one assist) and Malatesta (one goal, two assists) had three points each. The win marked the Mariners’ first against the Growlers in 2021-22. Booth, who was in goal when the game-winner was scored, was credited with his 7th win of the season.

The Mariners (27-27-4-2) wrap up their homestand with one more against the Growlers tomorrow afternoon at 3 PM. It’s Maine Maple Sunday and Pride Night at the Cross Insurance Arena. Fans will receive Oakhurst Dairy maple milk upon exiting the arena. Oakhurst Dairy is the sponsor of all three games this weekend. Tickets for all home games can be purchased online at MarinersOfMaine.com/tickets or by visiting the Trusted Choice Box Office inside the Cross Insurance Arena. 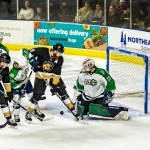 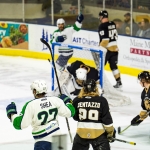