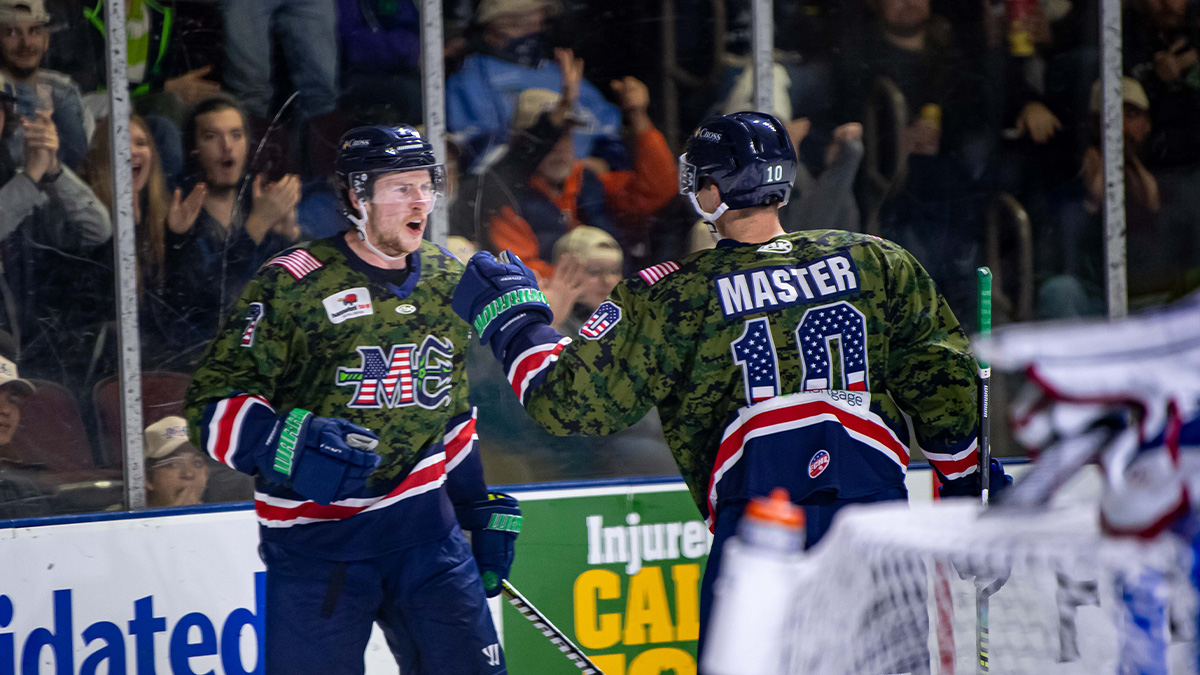 PORTLAND, ME – November 12, 2021 – Although he won’t be satisfied with the final score, Friday night was a game that Mariners forward Lewis Zerter-Gossage will never forget. Scoring five goals and adding an assist, Zerter-Gossage jumped into the Mariners franchise history books in an 8-7 overtime loss to the Trois-Rivieres Lions.

The Mariners had to fight back from multiple three goal deficits after a sluggish start to the game. Trois-Rivieres found the net twice in the first five minutes of the game to jump to a quick 2-0 lead. Justin Ducharme opened the scoring at 2:43, and Anthony Nellis capitalized on a miscue by Mariners netminder Jeremy Brodeur at 4:52. A power play goal by Peter Abbandonato made it 3-0 at 8:10, and spelled the end of the night for Brodeur, replaced by Zach Bouthillier. At 9:29 of the opening period, Justin Brazeau scored a power play goal to get the Mariners on the board, foreshadowing a huge night for his line with Zerter-Gossage and Pascal Laberge. The Lions regained their three goal lead at 12:40 of the period when Cedric Montminy deked Bouthillier with a backhander in close. Quick goals by Zerter-Gossage (PP) and Laberge, however, pulled Maine within a goal at 4-3. In the final minute of the period, Abbandonato converted on the power play yet again to give the Lions a 5-3 lead at the end of one.

Trois-Rivieres built their lead back to three when former Mariners Shawn St-Amant got a power play goal at 1:07 of the second period. It was then that Zerter-Gossage took over the game. From the 5:17 to the 8:47 mark of the middle frame, Zerter-Gossage scored three in a row to bring the game to a 6-6 tie. Two of the three goals came on the power play, as he found the net on both ends of a 5-on-3. The Mariners finished the game 4 for 4 on the power play.

Early in the 3rd, Zerter-Gossage made it four in a row when he gave the Mariners their first lead. Justin Brazeau walked to the net and was stopped at the post by goaltender Phillipe Desrosiers, but Zerter-Gossage cleaned up the rebound to give Maine a 7-6 lead at 4:02. With their goalie pulled, it was the Lions’ turn to mount a comeback as Olivier Archambault scored right off a faceoff in the Mariners end with just 28 seconds remaining to force overtime. The Mariners had the better chances throughout the sudden death frame, but Abbandonato finished his own hat trick with under a minute remaining to clinch the Lions the win.

With his performance, Zerter-Gossage broke the Mariners franchise records for goals and points in a single game. No Mariner played had scored more than three goals previously, while Ty Ronning held the previous points record of five against the Manchester Monarchs on November 24th, 2018. Brazeau and Laberge each had five points in this game as well. Zerter-Gossage became the 33rd player in ECHL history to score five goals in a game.

The Mariners, proud ECHL affiliates of the Boston Bruins, host Trois-Rivieres again on Sunday to finish their homestand. Partnering with News Center Maine, it’s a Thanksgiving Food Drive for Good Shepherd Food Bank as the Mariners collect non-perishable Thanksgiving items in the “Community Collection” box outside the box office. Fans can also get professional family holiday card photos taken on the ice following the game, which begins at 3:00 PM. Individual tickets can be purchased online at MarinersOfMaine.com or by visiting the Trusted Choice Box Office inside the Cross Insurance Arena.