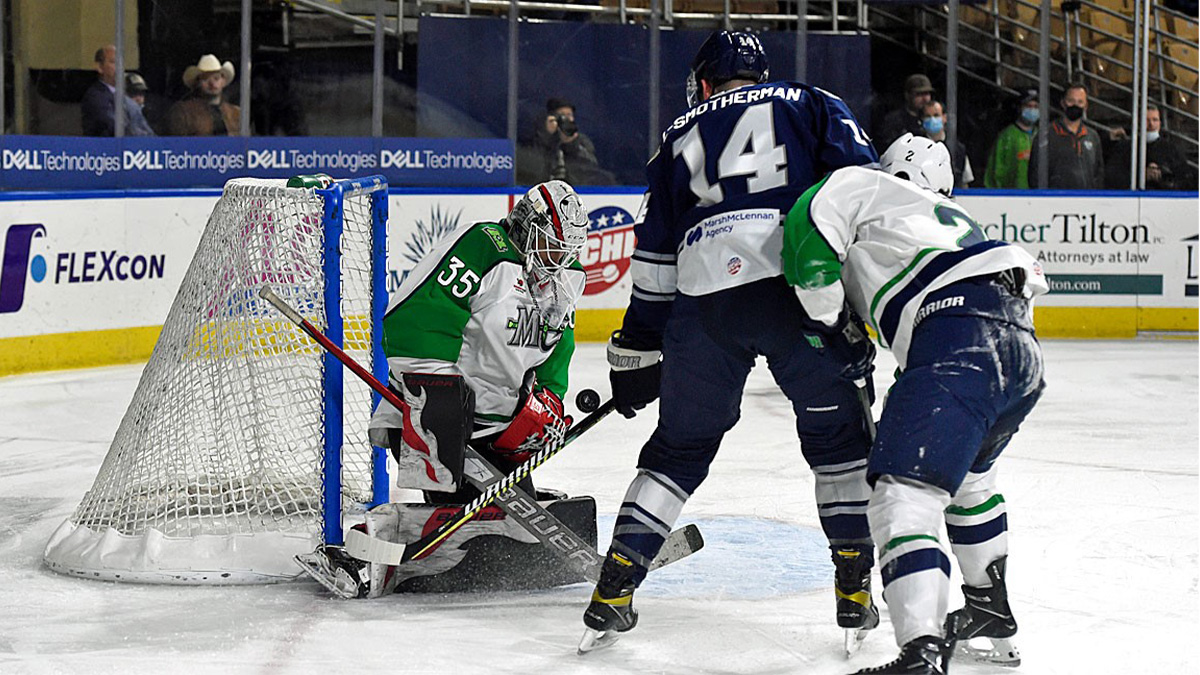 WORCESTER, MA – December 1, 2021 – Five Railers scored in six rounds of a shootout to outlast the Mariners, 5-4 in the mini-game and 3-2 overall on Wednesday night at the DCU Center. The Mariners battled back from a 2-1 deficit in the third period to gain a point.

The Mariners struck first in the game on an impressive goal by rookie forward Keltie Jeri-Leon at 7:50 of the opening period. Jeri-Leon took a feed from Justin Brazeau and exploded down the right wing, lifting one over Railers netminder Colten Ellis. It was the first time in the last eight games in which the Mariners scored first. A little under five minutes later, Worcester got even, striking just after their first power play chance came to an end. Zach Malatesta’s shot from the blue line deflected off of Mariners defenseman Connor Doherty and behind Jeremy Brodeur to tie the game, giving Malatesta his first goal of the season.

The only goal of the second period came off the stick of Worcester’s Liam Coughlin at the 9:45 mark. Coughlin carried the puck into the zone and ripped a shot past Brodeur’s glove to break the 1-1 tie. The Mariners fought through a key penalty kill later in the period which included a 4 on 3 and a 5 on 3. Brodeur made 14 saves in the middle frame as the Mariners were outshot, 15-9.

The third period was thoroughly dominated by the Mariners, peppering Ellis with 22 shots, a new season high for a period. Just 2:32 into the frame, Andrew Romano pounced on a rebound from a Nate Kallen shot and tied the game at two. Ellis kept the Railers tied the rest of the way, making 21 stops in the third. The overtime included a Railers power play, but neither team could find the game-winner.

Five Railers and four Mariners scored in the shootout. After Worcester’s Jacob Hayhurst and Maine’s Conner Bleackley brought it to a 1-1 tie through two rounds, four straight Railers shooters would beat Brodeur. Mathew Santos, Jason Horvath, and Patrick Shea all responded for the Mariners to prolong the mini-game, but Cam Askew was finally stopped by Ellis in the sixth round to end the game. Coughlin’s goal turned out to be the game-winner.

The Mariners (6-6-2-1) have a pair of home games this weekend against the Adirondack Thunder. Saturday night is the annual Teddy Bear Toss game, with all donations benefiting Marine Toys for Tots and the Holden Police Department. It’s also “Elf” night with Elf inspired specialty jerseys and Santa Con – fans encouraged to dress as Santa Claus. Finally, there is a winter beanie giveaway to the first 1,000 fans, presented by Martin’s Point Healthcare. Game time is 6:00 PM. The Mariners and Thunder then meet again on Sunday afternoon at 3:00 PM for “Beacon’s Half-Birthday.” The first 1,000 fans will receive a Beacon “shirsey,” courtesy of Unifirst. Individual tickets for all games can be purchased online at MarinersOfMaine.com/tickets or by visiting the Trusted Choice Box Office inside the Cross Insurance Arena. Family four packs are available for both games at MarinersOfMaine.com/shop.