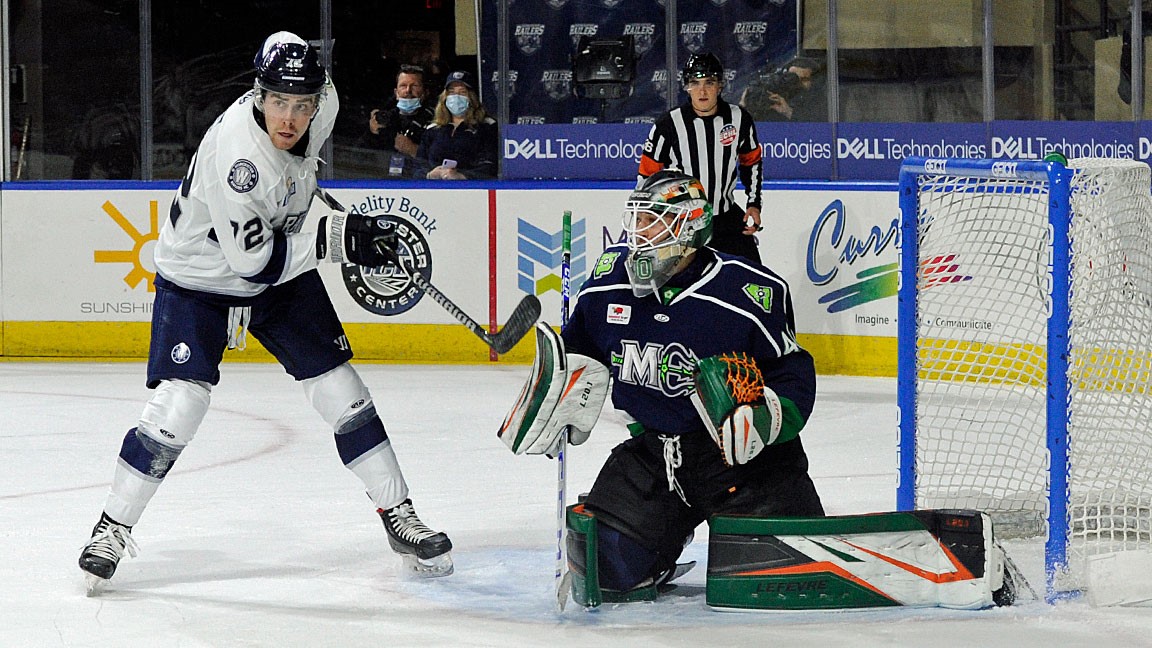 WORCESTER, MA – October 23, 2021 – It took until 6:56 of the third period for the Mariners to face a deficit in the early season, but Nic Pierog’s rebound goal made the difference in a 4-3 Worcester Railers victory on Saturday night at the DCU Center in Worcester.

The first three goals all occurred in the final five minutes of the opening period. Mariners rookie forward Keltie Jeri-Leon found a streaking Mathew Santos at 15:41 of the opening frame to give Maine the 1-0 lead. It was Jeri-Leon’s first professional point. Worcester quickly got even when Nolan Vesey put a shot over a sprawling Zach Bouthillier, making his Mariners debut. Just as he did on Friday, Pascal Laberge scored in the final minute of the first, this time ripping a wrister home on a 2-on-1 at 19:45, giving Maine the 2-1 lead after one.

Worcester instantly got even again when Felix Bibeau beat Bouthillier’s glove on a Railers 2-on-1 just 23 seconds into the second period. At 10:46, Maine claimed its third lead on an impressive individual effort by forward Nick Master, splitting through the Railers defense and cashing in his own rebound. The Railers again tied the game, however, Vesey tipping home a Zach Malatesta shot off the rush at 14:59. The Mariners peppered Railers rookie goaltender Colten Ellis with 20 second period shots.

The turning point of the game came early in the third when Vesey was assessed a double minor penalty for roughing but the Mariners failed to get their power play set up. As Jacob Hayhurst escaped the box, serving for Vesey, he dashed down and ripped a shot off Bouthillier’s glove, which Pierog cleaned up for the game-winner. The Mariners mounted an attempt to get even with a late 6-on-4 chance, but Ellis made a spectacular save on Lewis Zerter-Gossage in the final minute.

Ellis made 42 saves to win his professional debut while Bouthillier made 26 saves in his.

The Mariners begin a five game homestand on Friday, welcoming in the Trois-Rivieres Lions for the first time at 7:15 PM. Boston Bruins TV broadcaster Jack Edwards will make an appearance and the Mariners will recognize hospitality industry workers. It’s also a 1-2-3 Friday: $1 popcorn, $2 hot dogs, and $3 draft beer through the start of the 2nd period. The Mariners are also home on Sunday for a Halloween afternoon contest against the Reading Royals at 3:00 PM, the “Scary Sundays.” Tickets can be purchased online at MarinersOfMaine.com or by visiting the Trusted Choice Box Office inside the Cross Insurance Arena.