PORTLAND, ME – March 9, 2019 – After winning ten consecutive OT or SO contests, the Mariners were due for regression, and they dropped their second straight 3-on-3 result on Saturday night in front of a huge crowd at the Cross Insurance Arena. South Carolina forward Sam Fioretti played spoiler in front of 4,933 fans when he beat Connor LaCouvee’s glove with just 41 seconds remaining in regulation.

The teams traded power play goals in the first when Greg Chase blasted home a one-timer from the left circle at 13:20, but South Carolina’s Jonathan Charbonneau answered at 15:41 with his second goal of the weekend. The first period was fairly wide open, with each team registering 11 shots.

The second period was scoreless, but the Mariners held a 14-5 shot advantage in the frame. Maine missed on two power play chances and ended up finishing the night 1 for 7. South Carolina’s Tim Harrison put the puck in the net after an offside whistle causing mild controversy late in the period.

The Mariners were stifled by a combination of bad luck and strong Stingrays goaltending in the third. Three posts were rang, including Dillan Fox and Wade Murphy in succession. During Maine’s final power play of the game, netminder Adam Morrison came up with a pair of enormous stops to keep the game tied, ultimately forcing OT.

Both teams had chances through the first four minutes of the 3-on-3 but Fioretti’s wrister got by LaCouvee in the final minute, ending the game before a shootout was required. LaCouvee stopped 25/27 while Morrison’s win coming in a return from a long term injury came with 36 saves on 37 shots. The Mariners seven game point streak is their longest of the season.

The Mariners are off until next Saturday when they travel to Worcester to take on the red-hot Railers at 7:05 PM. They’re home a week from Sunday when they host the Newfoundland Growlers at 3:00 PM for Beacon’s Birthday Bash presented by Evergreen Credit Union. Only six home games remain in the regular season Tickets to can be purchased HERE or by calling the Trusted Choice Box Office at 207-775-3458. 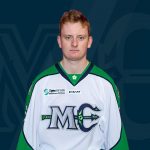