PORTLAND, ME – April 30, 2022 – The Royals scored on their only power play opportunity of the night, breaking a 2-2 tie midway through the third period, and skating to a 3-2 win over the Maine Mariners in Game 5 of the North Division Semifinals on Saturday night at the Cross Insurance Arena. The Mariners now face elimination in Game 6 as the series shifts back to Reading on Monday.

Reading struck first midway through period one when Trevor Gooch gloved a puck out of the air and made a nifty backhand pass across the slot to Patrick Bajkov. The Mariners got even before the period ended, using the power play to do so. Alex Kile fed a pass across to Michael Kim, whose one-timer caromed to Cam Askew right on the door step. Askew tapped home a goal for his third straight game to tie it up.

The teams traded goals once again in the 2nd, as Reading jumped back ahead at 3:27 with a Frank DiChiara goal. The Mariners responded quickly when Kile grabbed a loose puck between the circles and wristed one past Logan Flodell and tie it up at two. The game, like the series, was all even at two heading to the third.

The Mariners carried the play for most of the third period until Keltie Jeri-Leon was called for hooking at 11:32 which led to Thomas Ebbing’s power play deflection on Reading’s only man-advantage opportunity of the game. From there, the Mariners pulled Callum Booth and mounted a brief attack before the Royals killed the remaining minute and a half to seal the 3-2 win.

Logan Flodell stopped 25 of 27 to earn the win while Booth made 29 saves in the losing effort.

The Royals have a chance to close on the series in Game 6 on Monday night at Santander Arena in Reading. Game time is 7 PM. If necessary, Game 7 would be Wednesday, May 4th, also in Reading at 7 PM. The Mariners Broadcast Network will have coverage of both games via FloHockey.tv and MarinersOfMaine.com/listen, or the Mixlr App. Pregame coverage begins 15 minutes prior to puck drop. 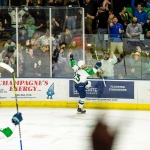 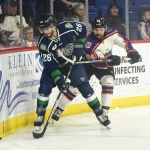