WORCESTER, MA – March 16, 2019 – A five goal second period tilted the game in the Railers’ favor and they rode the momentum to an eventual 5-3 win over the Maine Mariners on Saturday night at the DCU Center. The resulted created even more of a logjam for the final two spots in the North Division playoff race.

The Mariners took the lead 3:44 into the game when Dwyer Tschantz, sitting on the doorstep of the crease, tapped home a Michael McNicholas rebound, also set up by Brycen Martin in his return from injury. Worcester tied it quickly off a 3-on-2 rush when Tyler Barnes beat Chris Nell for his 50th point of the season. Nell was strong for the rest of the period, stopping 12 of 13 as the game was 1-1 through 20 minutes.

The 2nd period saw a total of five goals in a back-and-forth stanza. Barnes scored his 2nd of the night at 2:16, deflecting a David Quenneville shot through heavy traffic. Off the ensuing faceoff, the Mariners came back to tie it behind a perfect shot from Dillan Fox. The 2-2 tie didn’t last long either as Ryan Hitchcock beat Chris Nell with an awkward angle shot on the power play at 3:59. The Mariners once again tied it up at 9:36 when Taylor Cammarata fed Michael McNicholas, set up on a long dump from Morgan Adams-Moisan. It was McNicholas’ first goal in 11 games. Less than a minute later, Dylan Willick was the late man on another odd-man rush and took a Matt Schmalz feed to beat Nell and make it 4-3 Worcester. That was the score through two periods.

The Railers allowed only six Mariners shots in the third and sealed the game on an empty net goal from Barry Almeida at 19:28. Nell stopped 38 of 44 in the loss while Mitch Gillam made 24 saves to earn his fifth consecutive win. The Mariners and Railers are now tied for third in the North Division, one point ahead of Manchester and three up on Brampton.

The Mariners are back home tomorrow afternoon when they host the Newfoundland Growlers at 3:00 PM for Beacon’s Birthday Bash presented by Evergreen Credit Union. Members of the Mariners Kids Club can also skate with the team after the game. Only six home games remain in the regular season. Tickets to can be purchased HERE or by calling the Trusted Choice Box Office at 207-775-3458. 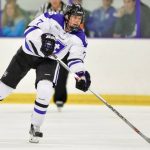