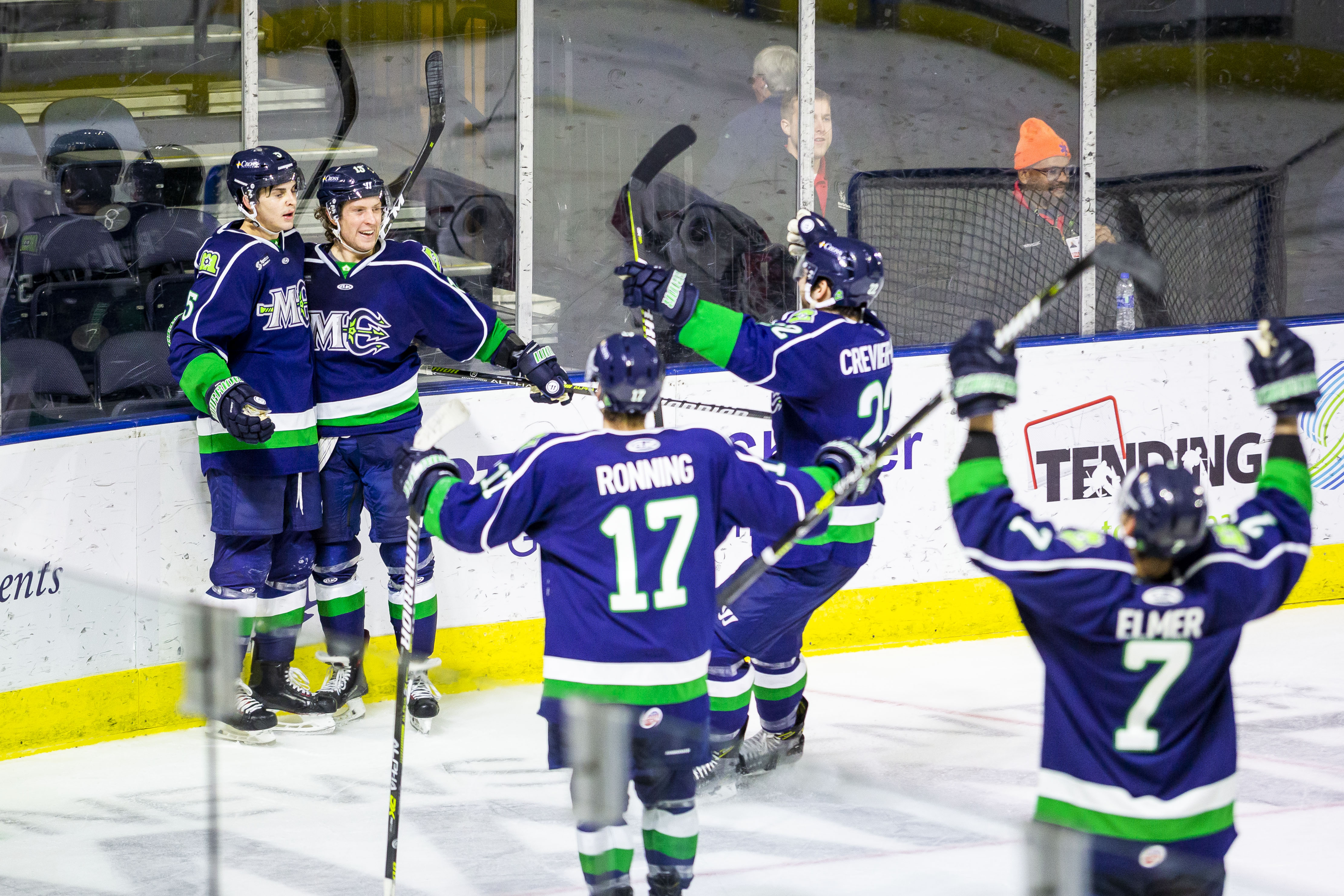 PORTLAND, ME – December 10, 2019 – The Mariners overtime magic is officially alive and well. After a 13-2-1 record in games going past regulation in their inaugural season, Maine improved to 4-0-1 in overtime or shootout games this season with a 3-2 OT win on Saturday night over the Adirondack Thunder at the Cross Insurance Arena. Dillan Fox played hero, scoring the game-winner at 6:21 of the sudden death session, giving the Mariners a three-game sweep over Adirondack in a five day span.

“We committed to playing a system,” said Mariners Head Coach and Assistant General Manager Riley Armstrong of the trio of wins. “Once we got into being above the puck, playing well on the D side, and being patient, it really showed.”

The Mariners outshot Adirondack 13-10 in the opening frame and grabbed a 1-0 lead late when Cumberland, Maine native Ted Hart drove the net from the left wall and gobbled up a rebound off the pad of Thunder netminder Evan Cormier for his fifth goal of the season.

At 5:56 of the 2nd period, Terrence Wallin intercepted a clearing pass at the top of the Thunder zone and found Ty Ronning at the left circle, who set up Alex Kile on the backdoor to double the Maine lead to 2-0. The pace of the game then slowed down but the score remained 2-0 until an Adirondack power play chance late in the frame. Ryan Gropp was called for crosschecking, and at 18:23, Casey Pierro-Zabotel redirected Jake Linhart’s point shot past Mariners goalie Francois Brassard to get Adirondack on the board. It was a 2-1 game at the end of two.

The tight-checking game continued through most of the third but the Mariners had three power play chances and couldn’t extend their lead. Back-to-back Mariners penalties to Greg Chase and Brandon Crawley gave Adirondack a late 5 on 3 and the Thunder converted to tie the game. After Mike Szmatula backhanded a shot off the crossbar, Robbie Payne cleaned up the rebound to make it 2-2 with 2:56 to go. The Mariners killed Crawley’s penalty to force overtime.

Maine controlled play through OT, outshooting Adirondack 7-1, but it took until the final minute for a puck to find the back of the net. Brandon Crawley spotted Dillan Fox going to the net and fed a perfect pass from the left-wing wall onto Fox’s tape for the game winner at 6:21. The goal broke a six game drought for Fox, who is the Mariners’ leading scorer.

“I’m not even sure I got a piece of it,” said a modest Fox. “But it ended up in the back of the net and those are big points so it felt huge, especially to finish off this three game sweep.”

Brassard was tremendous in net, making 35 saves to earn the win in his season debut. Cormier was also solid, turning aside 34 in the losing effort.

“The whole team played a really good game, solid defensively and I think it was a team effort,” said Brassard. “It was hard to give one up on the penalty kill in the third to tie it but it was good to bounce back in overtime.”

The Mariners have a four game road trip leading up to the holidays to Worcester and Glens Falls, but return to the Cross Insurance Arena for home games on December 26th and 27th. On the 26th, they host the Adirondack Thunder at 7:00 PM for “Nickelodeon Takeover Night,” featuring Teenage Mutant Ninja Turtles specialty jerseys. It’s also Jewish Heritage Night, in celebration of Hanukkah. December 27th is a 7:15 PM faceoff against the Reading Royals. It’s STEM Night, focusing on science, technology, engineering, and math. Groups of 10 or more can get discounted tickets by calling 833-GO-MAINE. Individual tickets can be purchased at MarinersOfMaine.com, at the Trusted Choice Box Office inside the Cross Insurance Arena, or by calling 207-775-3458. Four tiers of holiday packs for all gift-giving budgets are also available at MarinersOfMaine.com.