GLENS FALLS, NY – December 5, 2018 – A pair of goals by James Henry put the Mariners in a 3-1 hole that they couldn’t dig all the way out of on Wednesday Night at the Cool Insuring Arena, as they fell 3-2 to the Adirondack Thunder. The Mariners fell to 0-3-0-0 against the Thunder this season, and dropped their second straight to wrap up the road trip.

It was the Mariners that struck first just past the halfway mark of the first period when Brycen Martin joined a rush and beat Thunder netminder Alex Sakellaropoulos five-hole, set up by Michael McNicholas and Morgan Adams-Moisan. The Mariners penalty kill streak, which reached 36 straight, was finally broken by Peter MacArthur at 17:19 of the first when he blasted a Kevin Lough pass behind Connor LaCouvee. LaCouvee stopped 19 of 20 in the first period, which ended tied at one.

Maine began the 2nd period on the power play, but allowed a shorthanded goal to James Henry at 1:55. Mike Szmatula caused a turnover behind the Maine net and Henry walked out of the corner backhanding a shot past LaCouvee. Less than two minutes later, Henry scored again, finishing a double re-direct from Blake Thompson and Jacob Reichert. Reichert and Martin dropped the gloves later in the frame. The Mariners outshot Adirondack in the 2nd period, 15-12, but found themselves down 3-1.

In the third, Terrence Wallin cleaned up a loose puck in front of Sakellaropoulos at 7:27, getting assists from Drew Melanson and Alex Kile. Wallin had just returned from an AHL loan to Utica and was also playing his second game back in Glens Falls after spending parts of three seasons with the Thunder. 3-2 was as close as the Mariners would get, however, as their bid with the extra attacker failed to produce the tying goal.

LaCouvee stopped 40 in the loss, while Sakellaropoulos turned aside 31 of 33 for the win.

The teams will play again on Friday in Portland at the Cross Insurance Arena at 7:15 PM. It’s a 1-2-3 Friday: $1 hot dogs, $2 popcorn, and $3 Bud Light Drafts through the start of the second period. Fans are also asked to bring non-perishable food donations to benefit Preble Street. Tickets can be purchased at MarinersOfMaine.com or by calling the Trusted Choice Box Office at 207-775-3458. 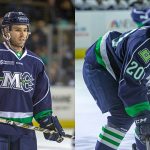