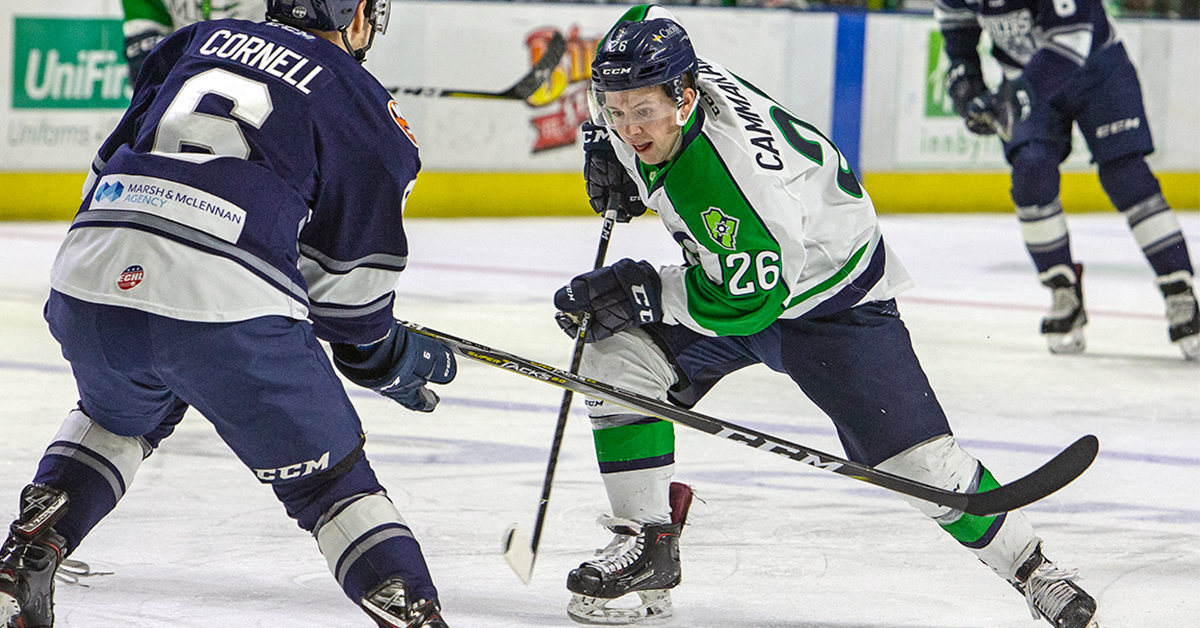 PORTLAND, ME – July 12, 2019 – Taylor Cammarata played for three different ECHL teams in 2018-19, but ultimately found a home in Maine. On Friday, the Mariners announced the re-signing of their inaugural season’s leading scorer.

A second year pro from Plymouth, MN, Cammarata spent time in Norfolk, Wichita, and Maine in 2018-19. The speedy forward was traded twice – from the Admirals to the Thunder on January 25th, and then to the Mariners on February 19th, in a deal that saw Jason Salvaggio head to Wichita. In a total of 73 games between the three teams, Cammarata put up 56 points (24 goals, 32 assists) to lead all Mariners scorers.

In Maine alone, Cammarata had 22 points (10 goals, 12 assists) in 21 games. He finished the season red hot, scoring seven goals in his last five games, sparked by a hat trick against Adirondack on March 31st. He ended the year on a five game point streak as well as a three game goal streak.

Cammarata’s professional career began in 2017-18 when he played for the South Carolina Stingrays. He finished the season with 30 points in 42 games and was an ECHL All-Star, winning MVP of the 2018 All-Star Classic. An alumnus of the University of Minnesota, Cammarata racked up the accolades in junior hockey as well, including being named “USA Hockey Player of the Year” and “USHL Player of the Year” in 2012-13, when he registered 93 points in in 59 games for the Waterloo Black Hawks. He was the USHL’s Rookie of the Year the season prior.

Now 24-years-old, Cammarata was chosen in the 3rd round of the 2013 NHL Draft by the New York Islanders, pick #76 overall.

“I’m very excited about being back in Portland,” said Cammarata. “I really enjoyed finishing out the season there last year, getting a small taste of a great organization and community. I look forward to bringing my offensive playmaking ability to help the team this season.”