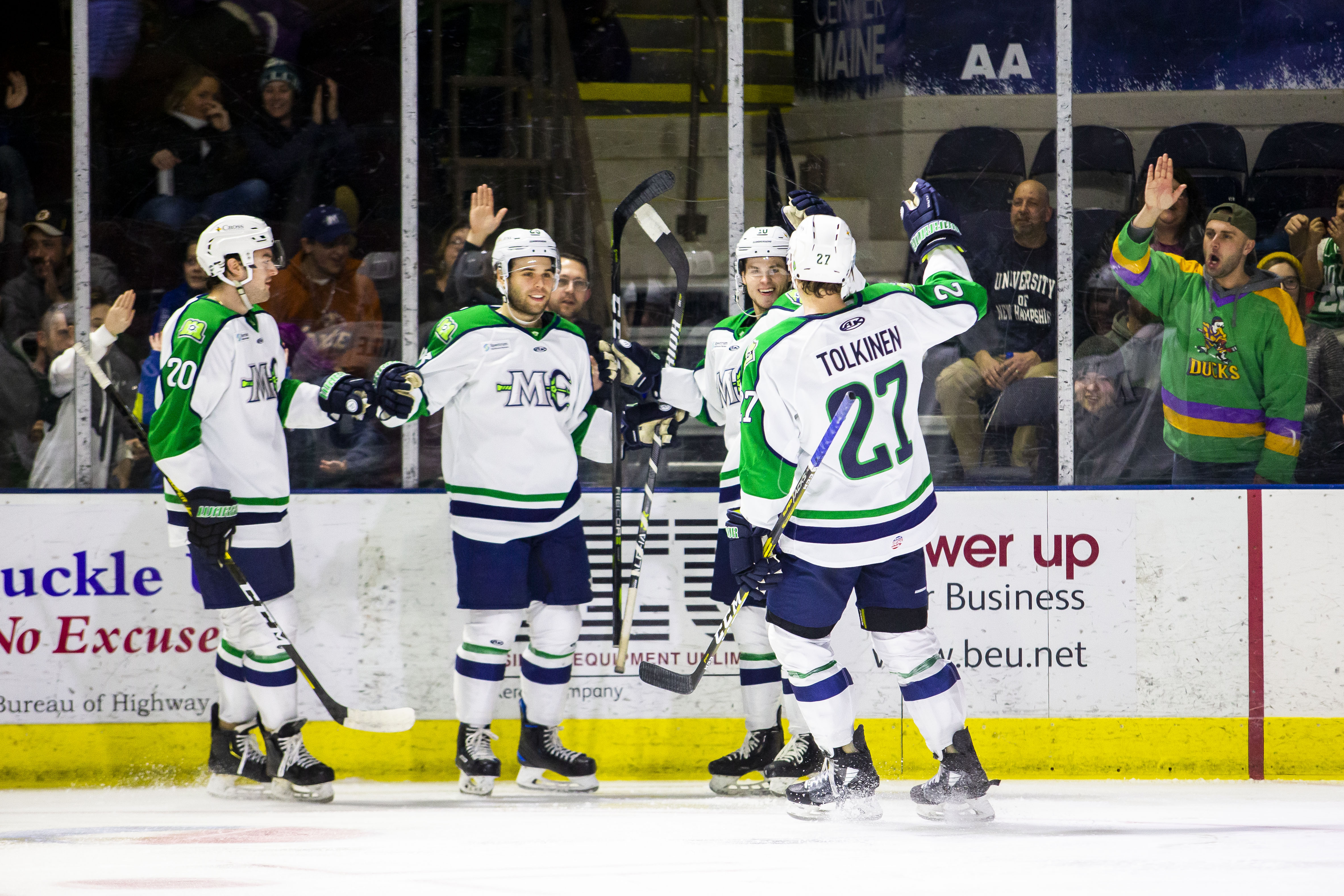 PORTLAND, ME – January 24, 2020 – The Mariners put up a season and franchise high eight goals to rout the Worcester Railers, 8-1 on Friday night at the Cross Insurance Arena. Ty Ronning’s hat trick led a squad of seven Mariners that had multi-point games, while Adam Huska turned aside 43 Railers shots to win his ECHL debut.

The Mariners took the early 1-0 lead after Nic Pierog took a delay of game penalty just 1:19 into the game. On the power play, Sean Day and Greg Chase moved the puck quickly to find Ty Ronning in the slot, and Ronning beat Evan Buitenhuis with the help of Morgan Adams-Moisan waving his stick past the eyes of the Worcester netminder. Worcester tied it up with their own power play goal at 6:20 at the very end of a Chase high-sticking penalty. Arnaud Durandeau gained the Mariners line and dropped a puck to Bo Brauer, who beat Mariners goaltender Adam Huska high to the glove side. At 11:23, the Mariners regained the lead when Adams-Moisan swept home a loose puck generated by Marc-Olivier Crevier-Morin’s net drive. Despite being outshot 17-6, Maine carried the 2-1 lead into the first intermission.

The Mariners opened the game up with three goals in less than 60 seconds between the six and seven minute marks of the middle frame. First up, Lewis Zerter-Gossage potted a puck that came right back to him off the skate of Railers defenseman Justin Murray from an attempted cross ice pass. Thirty-six seconds after, Ronning got his second of the game, following a wide shot to the back boards and banking the rebound off Buitenhuis for an unassisted goal. Twenty-two seconds later, Greg Chase beat Buitenhuis short side as he came down the right wing side and scored Maine’s third goal in a total span of 58 seconds. Buitenhuis was pulled for Ian Milosz following Chase’s goal. In the final minute of the period, Ronning completed the hat trick when he picked up a rebound off the pad of Milosz that was put on goal by Michael McNicholas.

“I wore some new skates today so my feet were hurting, but it looks like I’ll have to keep them for tomorrow’s game,” said Ronning. “It wasn’t our best game even though we scored a lot of goals. We had some bounces on our side but overall I think we picked it up in the third period and won some more of our battles and overall I think it was a team effort.”

“For Ty, that’s what he is,” said Mariners Head Coach and Assistant General Manager Riley Armstrong. “He loves to score goals and I think if he keeps skating and playing the right way those chances will keep coming to him.”

Dillan Fox and Ryan Culkin scored goals in the third to give the Mariners a new season and franchise high in goals in a game. Culkin’s came on the power play and was his third point of the game. Thirteen of the sixteen Maine skaters registered points, with seven putting up multi-point efforts. The Mariners were doubled up in the shot column, 44-22, but Huska was fantastic, making 43 saves in his ECHL debut.

“It feels good because that was my job to come here and do my best,” said Huska. “The team battled hard and in the second period, that’s where the game broke open.”

The Mariners will play their next three games on the road – tomorrow in Worcester and next Wednesday and Friday at Adirondack. Their next home game is next Saturday, February 1st against Adirondack at 6 PM. It’s Make-A-Wish Maine night presented by Agren. The Mariners will wear jerseys designed by 11-year-old ‘Wish Kid’ Ellie Labree, which will be auctioned via Handbid with proceeds to benefit Make-A-Wish Maine. All Saturday and Sunday home games feature the Family Four Pack – four tickets, four food and drink vouchers, and four Mariners beverage koozies, starting at $80. Groups of 10 or more can get discounted tickets to all games by calling 833-GO-MAINE. Individual tickets can be purchased at MarinersOfMaine.com, at the Trusted Choice Box Office inside the Cross Insurance Arena, or by calling 207-775-3458.