BRAMPTON, ON – November 16, 2018 – The Mariners struggled offensively and defensively on Friday night in Brampton, falling to the Beast 3-0 in their first shutout loss in franchise history. They allowed 46 shots but trailed by just one through two periods of play. A pair of Beast goals in the third sealed the game and the Mariners offense was stymied by Etienne Marcoux.

Beast leading scorer David Pacan got the game’s opening goal at 7:31 of the first period when his backhand caught Mariners goaltender Chris Nell out of position. Pacan’s goal was the only one through the first 40 minutes of the game as Nell and Beast goalie Etienne Marcoux stole the slow. Marcoux stopped a pair of shorthanded breakaways by Drew Melanson and Justin Breton. Despite the chances, the Mariners were heavily out-shot and out-possessed. They allowed 17 shots in each of the first two periods.

In the third, Daniel Ciampini cashed a breakaway at 5:51 to double the Beast lead and for insurance, Chris Martenet blasted a point shot at 12:39 to make it 3-0. Marcoux robbed John Furgele on a 2-on-1 to seal his 23 save shutout. Nell stopped 43 of 46 in the loss.

The Mariners and Beast complete the weekend series on Saturday at 4:00 PM. The Mariners return home on Saturday, November 24th to host the Manchester Monarchs at 6:00 PM. It’s Teddy Bear Toss Night and the first 2,000 fans through the gate will receive a Mariners winter beanie. Tickets can be purchased at MarinersOfMaine.com or by calling 207-775-3458. 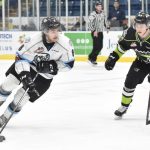