PORTLAND, ME – April 29, 2022 – Callum Booth recorded a 32 save shutout while the Mariners used their special teams to score all four goals in a 4-0 win over the Reading Royals in Game 4 of the North Division Semifinals. The series is now tied 2-2, with at least two more games now guaranteed to be played. A crowd of almost 4,000 witnessed the win on Friday night at the Cross Insurance Arena.

The game’s first goal didn’t come until the final minute of the second period. During 4-on-4 hockey, Mathew Santos whipped a one-timer from the left faceoff circle that deflected off of Nick Master and past the glove of Logan Flodell with just 54 seconds left in the middle frame. The Mariners carried the 1-0 lead into the third with the help of Booth, who had 22 saves through 40 minutes.

In the third, the Mariners added insurance with a power play goal at 5:38. Santos put on the brakes just inside the blue line and sent Alex Kile in alone on Flodell. Kile slipped a backhand between the goaltender’s pads to make it a 2-0 game. Kile, who had just returned from AHL Lehigh Valley earlier today, helped the power play net another one at 17:22 when his one-timer was tipped in by Cam Askew giving Maine a three-goal cushion. Keltie Jeri-Leon’s empty netter at 18:21 sealed the 4-0 final.

Booth’s shutout was the second of his ECHL postseason career, and his first since 2019. Flodell stopped 22 of 25. Defenseman Zach Malatesta joined Santos and Kile with a multi-point game, notching a pair of assists. The Mariners have now won their last eight home games, dating back to March 26th. The home team is 4-0 in the Mariners/Royals series and 10-0 in the regular season and postseason series combined.

Game 5, the final Mariners home game in the series, is tomorrow night at 6 PM. Tickets can be purchased at MarinersOfMaine.com/playoffs, by calling the Trusted Choice Box Office at 207-775-3458, or by visiting the box office inside the Cross Insurance Arena. Game 6 will be played Monday in Reading, as will Game 7 if necessary, on Wednesday. Both games will begin at 7 PM. 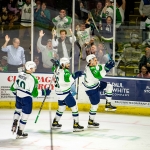 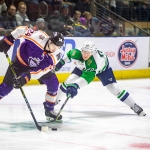