ORLANDO, FL – November 20, 2021 – The Mariners scored twice with their goalie pulled, but came up a goal short on Saturday night in a 5-4 loss to the Orlando Solar Bears at Amway Center. Just Brazeau led the Mariners with a pair of goals in the game, while Bruins prospect Victor Berglund scored his first Mariners goal.

Following a scoreless opening period, the action picked up in the middle frame. The Solar Bears struck first with a shorthanded goal at 3:39 of the 2nd, when forward Tyler Bird drove down the wing and cut across the Mariners crease to beat netminder Zach Bouthillier. At 11:21 of the period, the Mariners tied it up when Justin Brazeau took a pass from Michael Kim and ripped a wrister past Orlando’s Zach Emond from the right wing circle. At 16:19 of the period, the Solar Bears went back ahead on a Steenn Pasichnuk goal, but the Mariners once again had the answer when Victor Berglund blasted home a power play goal to tie the game at two.

Entering the third in a 2-2 tie, the Solar Bears scored twice in the first three minutes of the period to take a 4-2 lead on goals by Kevin Lohan and Luke Boka. With a little over 3:30 remaining, Cam Askew caught Emond by surprise, sneaking one through from a sharp angle and bringing it back to a one goal game. An ice-length empty net goal by Orlando defenseman Michael Brodzinski then put the Maine deficit back to two. With 19 seconds remaining and the goalie pulled again, Pascal Laberge found Brazeau in behind Emond for Brazeau’s second goal of the night. The Mariners mounted one last effort in the final seconds but couldn’t get a last shot off before the final horn sounded.

The Mariners (5-4-2-0) return home for a pair of games next week around Thanksgiving on November 24th and 26th. They host the Worcester Railers on Wednesday the 24th at 7:00 PM as the VIP Rivalry Cup continues. The Newfoundland Growlers come to town on the 26th for a 7:15 PM faceoff and Marvel Super Hero™ Night, which will feature Black Panther specialty jerseys and a Marvel poster giveaway to the first 1,000 fans. It’s also a 1-2-3 Friday: $1 popcorn, $2 hot dogs, and $3 Bud Light Drafts through the start of the 2nd period. Individual tickets can be purchased online at MarinersOfMaine.com or by visiting the Trusted Choice Box Office inside the Cross Insurance Arena. 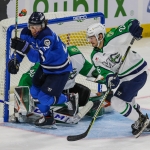 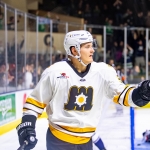