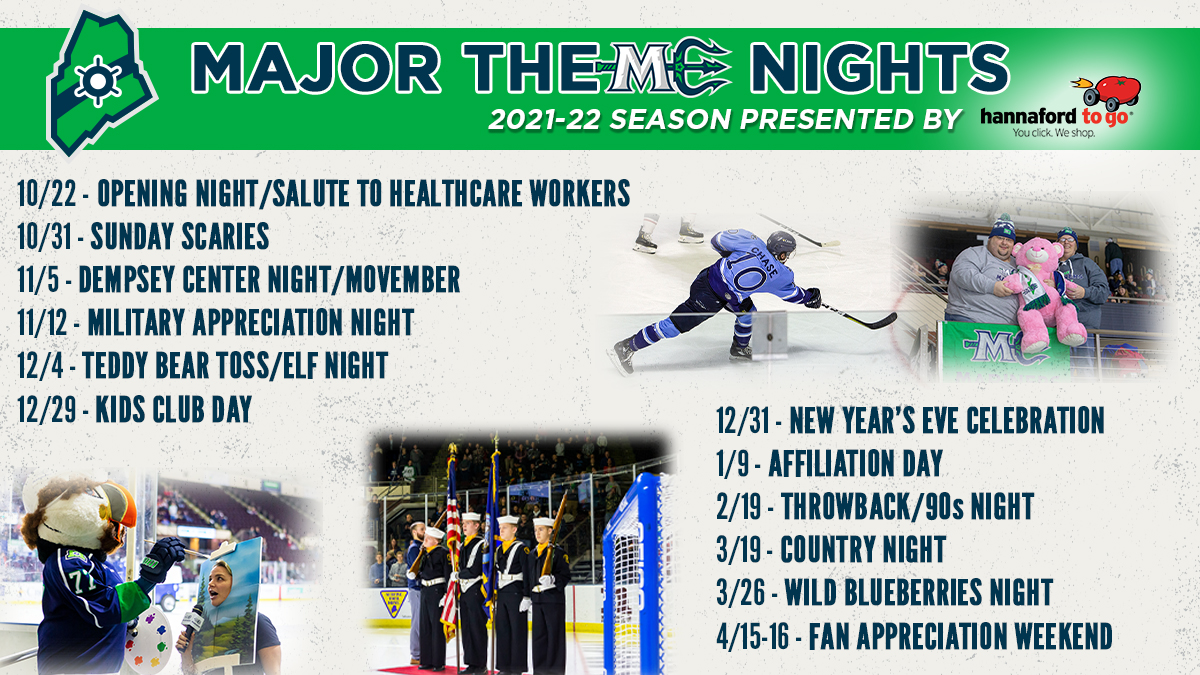 Opening Night is Friday, October 22nd against the Worcester Railers at 7:15 PM and is sponsored by Skowhegan Savings. The Mariners will salute local healthcare workers for their dedication through the COVID-19 pandemic. A magnet schedule giveaway will be presented by Portland North Dental. The Mariners have additional surprises planned to celebrate the new Boston Bruins affiliation, and the long awaited return of hockey to the Cross Insurance Arena.

On Sunday, October 31st, the Mariners will hold a Halloween themed gamed, with “Sunday Scaries.” It’s a 3:00 PM afternoon faceoff that will feature a postgame trick-or-treat for kids. Fans are encouraged to dress in costumes and enjoy Halloween music and activities throughout the game.

The Mariners are partnering with the Dempsey Center on Friday, November 5th, a cancer management organization founded by Hollywood star and Lewiston native Patrick Dempsey. November is Pancreatic Cancer Awareness Month and also the month of “Movember,” a hockey-centric men’s health initiative. The Mariners will raise money for the Dempsey Center through a special ticket package and other opportunities throughout the game.

One day after Veteran’s Day is Military Appreciation Night on Friday, November 12th, presented by Martin’s Point, honoring the men and women who served and continue to serve the country. The Mariners will wear special camouflage jerseys, which were voted on by the fans last year.

Saturday December 4th will be the annual Teddy Bear Toss game, also featuring the theme of the Warner Bros. movie “Elf.” This will also be a specialty jersey game with a holiday theme throughout the night. Fans will be encouraged to dress as Santa Claus – to create a “Santa Con!”

“Kids Club Day” will focus on the young fans – an afternoon midweek game during holiday break on Wednesday, December 29th at 3 PM. Members of Beacon’s Kids Club will assist Mariners staff in game  production and have the opportunity to enjoy game day experiences like watching warmups from the bench or dropping the puck. The entire day will be kid-centric.

Ring in 2022 with the Mariners, as well! A long-standing Portland hockey tradition, the New Year’s Eve game returns to the Cross Insurance Arena on the final day of 2021. It’s a 5:00 PM face off on December 31st.

On Sunday, January 9th, a night specifically dedicated to the Boston Bruins affiliation will be “Affiliation Day.” The familiar Bruins black and gold color scheme will be featured, and fans will be encouraged to wear their Bruins gear.

On Saturday, January 19th, the popular “Throwback Night” returns, which will also emphasize “throwing it back” to the 1990s – the last time a Bruins affiliate played in Portland. Ticket prices from the 1990s will make a comeback – with all tickets $8 for the game. Season ticket holders will receive a commemorative throwback ticket stub and a giveaway will be 90s themed. Alumni appearances included as always.

“Country Night” is scheduled for Saturday, March 19th. Fans will be encouraged to wear cowboy hats and boots and enjoy country music throughout the game.

The much anticipated “Maine Wild Blueberries” will return on Saturday, March 26th. We’ll once again experience “what could have been,” if the team naming contest had gone differently, as the Mariners become the Wild Blueberries for a night, including the return of the now-famous jerseys. Oakhurst Dairy sponsors the game, which is part of one of four “3Kends” throughout the season, presented by Three Dollar Deweys.

Finally, “Fan Appreciation Weekend” closes out the season on April 15th and 16th, with prizes giveaways throughout each game and a celebration of the people that make Mariners hockey possible – the fans!

Additional theme nights, giveaways, special ticket packages, and further information on the themes listed above will be announced in the future. The complete list of specialty jerseys will also be revealed in a separate announcement. The full 2021-22 Mariners schedule can be found here.